<< Go Back up to Theatre Research 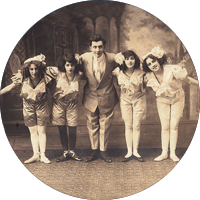 The Dictionary of Vaudeville was first published by The Daily Times of Davenport in Iowa, in December 1923. Many of the terms defined are still relevant to theatre directions today.

Vaudeville English, as compiled by Frank J. Kingsley of the New York Times in late 1923:

AD LIB STUFF: Speeches or business improvised in the course of an act.

AGENT: Business representative of acts who sells to booking agent.

ALL WET: An artist without unction or “selling” power.

AND CO: The other person or persons in an act with a headliner.

ANNIE OAKLEYS: Any kind of a pass.

APPLE SAUCE: Hokum that fails soggy like a wet towel.

ARRANGEMENT: A classical masterpiece of music syncopated and jazzed and played with incidental effects.

BLACK OUT: Turning out the lights to force an act to leave the stage.

BOTTOMLINER: Second feature on the bill.

BOUQUET: A critic’s praise of an act.

BREAKING IN: Playing an acceptable act off the main stem for a few weeks to give it needed “work,” in preparation for the big time.

BULL: Performing elephant, also applied to praise from one artist to another back stage.

CATCHING AN ACT: Watching a vaudeville performance for professional reasons.

CLOSING IN: Dropping the Olio curtain to close in One.

CLOSING INTERMISSION: The spot on the bill just before intermission.

CLOSING THE SHOW: Going on last.

CONTINUOUS: Vaudeville presented seriatim all afternoon and all evening, the bill being repeated over and over again.

CRABBING THE TURN: Gumming the act with malicious intent.

CRASHING THE GATE: Getting by the doorman without pass or ticket.

EXCLUSIVE MATERIAL: Acts or songs written to order for artists for their sole use and “protected.”

EXTRA BLACK: Brunt cork used by a colored artist to accentuate his complexion.

FAKING A DANCE: Dancing to a counterfeit orchestration whose phony music permits cheating on the difficult steps.

FLUFFING: Being just too sweet and unctuous to live in the two-a-day.

FLYING THE WIPE: Acrobats tossing handkerchiefs from one to another.

FOUR: That section of the stage six or more feet back of Three.

FULL WEEK: The policy of playing the same bill all the week long.

GAGGINGL Putting jokes not in the routine.

GETTING THE BIRD: Having dislike made audible in various forms by the audience.

GETTING THE PINK SLIP: Being canceled, which notice comes on pink paper.

GRAVY: Comedy with a suggestion of the improper.

GUMMING THE ACT: Going up in lines or forgetting business.

HEADLINER: Most important artist on a bill, featured in advertising and given star dressing room.

HIGH HATTING: One artist patronizing another.

HOKUM: Rough and ready comedy, stereotyped sentiment, time-trial appeals to laughter or tears – the old basic stuff of the theater.

HOLDING DOWN THE SPOT: Making good in your position on the bill.

JASBO: Out and out vulgarity.

JITNEY JUMPS: Playing one Keith house after another in New York on a nickel carfare – very welcome after paying heavy railway transportation charges.

JUICEMAN: Electrician in a vaudeville theater.

JUMP: The necessary travel to reach the next town booked.

LAYIN’ THE SKIDS: Either gumming or crabbing.

MIDDLELINER: Third feature on the bill.

MOVED UP: Being given an earlier spot, which is no compliment.

MOVED DOWN: Getting a better spot and marking at least one act happy.

NEXT TO CLOSING: No. 8 spot on a nine-act bill – the act preceding the last.

NUT COMIC: Comedian who says and does ridiculous things often impromptu – Bert Fitzgibbon is the perfect type – a daffy guy.

OIL CAN: A bad act or actor.

OILING UP: Refining an act and cutting out rough stuff.

OLIO: Drop curtain across the stage working flat against the tormentors – the background for artists “in One.”

ONE: The front section of the stage between the tormentors and the proscenium arch – it is backed by the olio drop when acts work “in One.”

OPENING INTERMISSION: Having the spot right after intermission.

PENCILED IN: A tentative booking.

PERFORMER: Once a general term, but now applied only to great artistic technicalities with true showmanship.

RASPBERRY: Criticism by the outspoken in an even more than outspoken manner.

RISLEY ACT: Acrobats who lie on their backs and balance and cast with feet and hands – named after its great exponent.

ROUTE: The line-up of vaudeville players for which an artist holds contracts.

ROUTINE: The playing order of an act, especially one with song and dance.

SCOUT: Expert who spend his time looking for new acts, new personalities and possibilities for vaudeville.

SERIO-COMIC: Singer who can “sell” both dramatic and comedy numbers.

SONG PLUGGER: A retiring representative of a song publisher planted in the audience to call for songs, whistle refrains and applaud.

SINGLE: An artist working alone as an act.

SITTING ON THE HANDS: Report made by flops to the act following them.

SLOUGHED: Having a bad press on Tuesday.

SONG BOOSTER: A song plugger not a bit nicer under another name.

SPOT: An act’s position on a bill.

STOPPING THE SHOW: Making the audience encore an act to the exclusion and delay of the next on the bill.

SURE-FIRE: An act, a gag or bit of business that appeals to all audiences.

TABLOID: A musical show or play condensed into one act for vaudeville.

THREE: That section of the stage six feet or more back of Two.

TIME: The playing dates offered by circuits and theaters.

TOPMOUNTER: The lightweight acrobat at the apex of a human pyramid.

TOPPING LAUGH: Making laughs follow one another so closely that they overlap – an infrequent phenomenon.

TRYOUT: An experimental hearing of a new act, usually far away from Broadway.

TWO: The section of the stage between One and the set of wings six or more feet back of the Olio drop.

UNDERSTANDER: The husky guy at the base of a human pyramid or similar acrobatic structure.

UNDERSTAKERS OUT FRONT: A cold audience.

VARIETY: What vaudeville used to be called.

WORDS AND MUSIC: Team composed of composer and song writer.

WORKING FULL STAGE: Using the entire stage – One, Two, Three and Four – for an act.

WOW: A sensational hit or a gag that wins uproarious laughter.