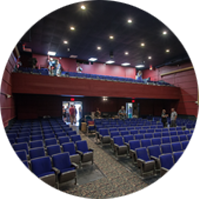 Groundbreaking took place during the first week of July 1920. Work progressed rapidly, for in its October 21st edition the Post-Register reported that the theatre would open on October 29th. A crowd of “fifteen hundred or two thousand people” jammed into the Baker Theater on opening night to see two performances of In Old Kentucky, starring Anita Stewart. Prior to the main performance, the image of consummate showman Col. Baker was flashed on the screen which “brought forth uproarious applause” from the grateful audience. Two “traveling men” who attended the opening night performance proclaimed the theatre the “most modern in the state, with appointments the equal of those of theatres in much larger cities”.

In 1933 the theatre was remodeled. The most significant improvement and expenditure was the addition of air conditioning. Johnson Air Conditioning of San Antonio installed the chilled water system. A glass-walled cry room was also provided in the area currently occupied by the concession stand. One can easily imagine the wonder and amazement of the citizens of Lockhart when they first entered this fantasy world.

Col. Baker died on September 12, 1936 in Lockhart. The Baker Show Company, Inc. owned the theater until 1959, but little is known of this period. The second of the Baker’s major renovations was performed during this time, probably in the early 1950s. Unfortunately, nearly all the rich decorations of the 1933 remodeling was removed and the theatre was given the “modern”, appearance it exhibits today. One area that received especially severe treatment was the ground floor main façade. The pinkish-tan ceramic tile, angled front wall, and enlarged marquee date from this period.

In 1959 the Baker was purchased by August Valentine. August, his wife, Anne, and daughters Augusta, Valerie, Alice, and Virginia had previously operated a drive-in theatre in Georgetown for several years. The Valentine family ran the Baker until 1984. The suspended acoustical ceiling and gas air conditioning were installed during their ownership of the theatre. Christine, the last film, was shown on 1st March 1984.

The theatre remained closed until its purchase by the Lockhart Community Theater in 1997. It was then remodeled to accommodate live theatrical productions. The theatre reopened in October, 1998 with Steel Magnolias.

How do I visit the Gaslight-Baker Theatre?

As of January 2019 the Gaslight-Baker Theatre does not offer theatre tours but you can of course attend one of the many and varied events hosted at the theatre. Check the theatre’s website

Photos of the Gaslight-Baker Theatre