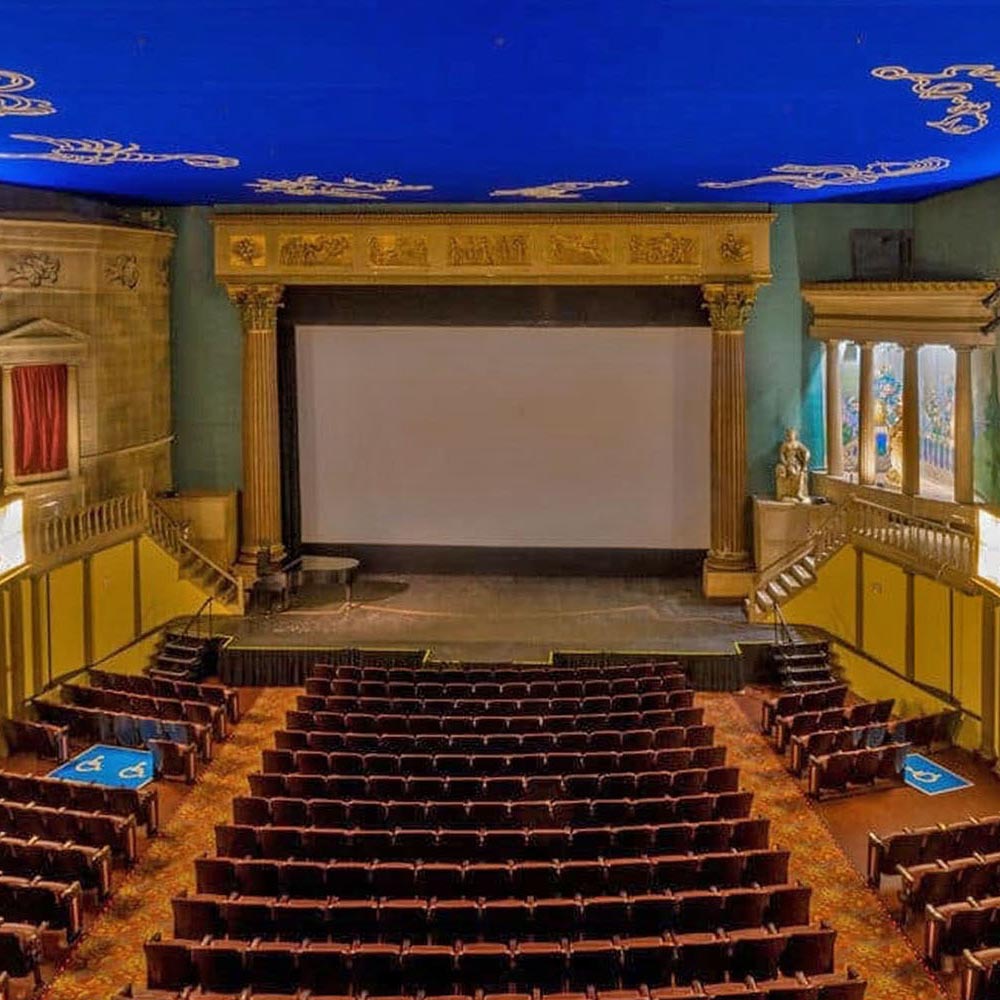 Reopened as an Atmospheric Theatre: 22nd September 1938 (84 years ago)

The Latchis Theatre in Brattleboro, Vermont, originally opened in April 1920 with Douglas Fairbanks starring in “When the Clouds Roll By”. By 1926 the theatre was known as the Latchis Opera House.

The current theatre was built by the four Latchis Brothers in honor of their father Demetrius, an immigrant from Greece. It was a wholesale remodel of the 1900s-era building and properties surrounding the original 1920s Latchis Theatre. The theatre’s entrance was relocated to an adjacent street and the new building received Art Deco façades. The theatre reopened in September 1938 as the Latchis Memorial Theatre, the opening having to be delayed due to the catastrophic effects of the Great New England Hurricane

The auditorium got an atmospheric style makeover with a Greek theme in honor of the Latchis Brothers’ father. The extensive sidewall murals were created by Hungarian-American artist Lajos “Louis” Jámbor (best known for creating the popular image for the cover of the 1947 edition of Louisa May Alcott’s novel Little Women).

Jámbor noted that his murals were not just derived from Greek mythology, but were also painted using Greek methods (using a beeswax to fix colors giving them the appearance of watercolors) as opposed to Roman fresco methods. Jámbor’s influences were the Apollo and Bacchus myths, with Apollo featuring on the left side of the auditorium and Bacchus on the right. In a modern take on the atmospheric style, Jámbor also painted signs of the zodiac on the blue sky ceiling.

Owned by the Latchis Family until 2003, the Latchis Theatre has largely survived intact and is now both a multi-screen movie theatre and popular live entertainment venue.

In the Autumn/Fall of 2013, with help from EverGreene Architectural Arts, the deteriorating ceiling was repaired and painted midnight blue and the ceiling’s zodiac signs were picked-out in brilliant white. Other work included new seating by the Irwin Seating Co., new carpeting, and a new exterior marquee.

Photos of the Latchis Theatre