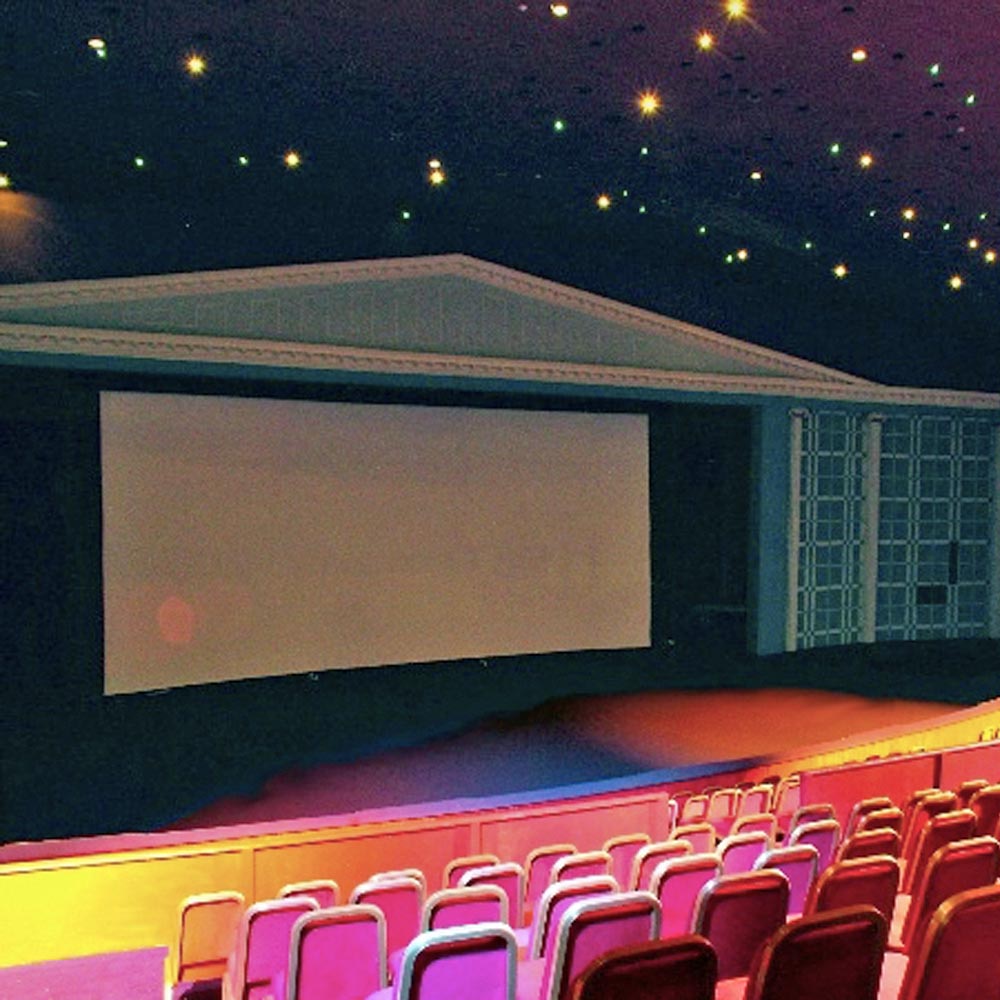 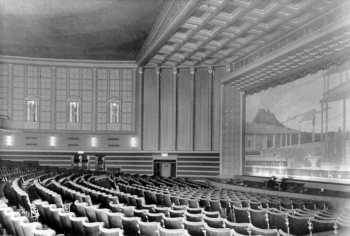 The New Victoria Cinema opened in late August 1930 as a project of Gaumont British Theatres and Provincial Cinematograph Theatres (PCT). Architect William E. Trent designed the single screen super-cinema, which originally seated 2,058 (claimed in some newspapers to be nearly 3,000) on two levels.

Externally the façade was clad in cream tiles and had four Doric columns over the entrance, and a balcony/terrace open to the public. The auditorium evoked the sense of sitting in an open-air Grecian amphitheatre, the fire/safety curtain complementing the theme being painted with a representation of the Acropolis at Athens.

The extremely wide auditorium had a blue-sky ceiling onto which moving clouds were projected. The auditorium sidewalls had a series of niches that contained sculptures, described variously as Gods and Godsesses of the Acropolis or as the Muses of Art, Music, and Drama. Ionic columns ran in a colonnade across the rear of the balcony, and at the rear of the stalls (main floor) seating were a series of 12 private boxes. Seating was 1,226 in the stalls (main floor), 772 in the balcony, and 60 in the boxes.

The cinema was built with a stage 88ft wide by 32ft deep (26.8m by 9.8m), five dressing rooms, and a proscenium opening of 46ft (13.7m) in width. Other facilities included a Wurlitzer 3-manual, 10-rank theatre organ (opus 1265) which had originally been installed in the Embassy Theatre, Baltimore (Maryland), US in 1926.

CinemaScope was installed in 1954. The proscenium was widened and brought forward (and the pillars hidden by curtains) in 1958 to allow South Pacific

to be exhibited in 70mm. The auditorium was also modernized, and lights were fitted to the ceiling to enhance the atmospheric effect of sitting under a starry sky. The seating was also reduced to around 1,784.

From early April 1964 the cinema was renamed the Odeon, and in December 1974 was given a Grade B Listed Building status. The listing was upgraded to Grade A in April 2012, in large part due to the building’s significant rarity as one of only two surviving Atmospheric cinemas in Scotland. Historic Scotland

stated at the time that “No semi-atmospheric cinemas of comparable scale and style to the New Victoria survive in Britain”.

The stage was made deeper in 1978, and the building was often used for live music shows such as The Clash. 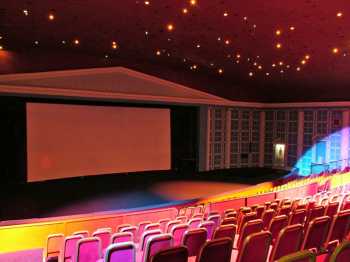 The Odeon closed as a cinema in late August 2003, and Odeon sold the building to a property developer.

, called Pod Deco, in 2004 and 2005. In February 2005, plans were lodged with Edinburgh City Council to demolish the auditorium entirely for the erection of student flats, with retention only of the external façade. The considerable controversy generated may have in large part led to the plans being withdrawn.

In 2010, plans submitted in 2008 for the building to be demolished – which had been approved by Edinburgh City Council in 2009 – were overturned by Ministers of the Scottish Government following the intervention of Historic Scotland who claimed that destroying the Category B-listed building was “not justified”.

In late 2012, plans were submitted and subsequently granted to demolish the stagehouse and use the land for student accommodation, now branded Hello Student Accommodation

In 2013 Gerry Boyle (brother of singer Susan Boyle) took over the building to convert it into a live performance venue. The foyer/lobby and other areas of the building opened on 1st November 2013 as the Instant Arena. The main auditorium opened in 2014 as a 600-seat venue, but closed within weeks.

In November 2015 the empty building was purchased by hospitality and leisure operator G1 Group, whose portfolio of venues include restaurants, bars, late night bars, nightclubs, cinemas, and hotels. Proposals for using the building as an entertainment venue, super-pub, or as an arts center have come and gone over the years.

that the historic cinema would be brought back to life. Owners The Scotsman Group (formerly G1 Group) confirmed they “are working hard in the background on plans to bring this historic site back to life”.