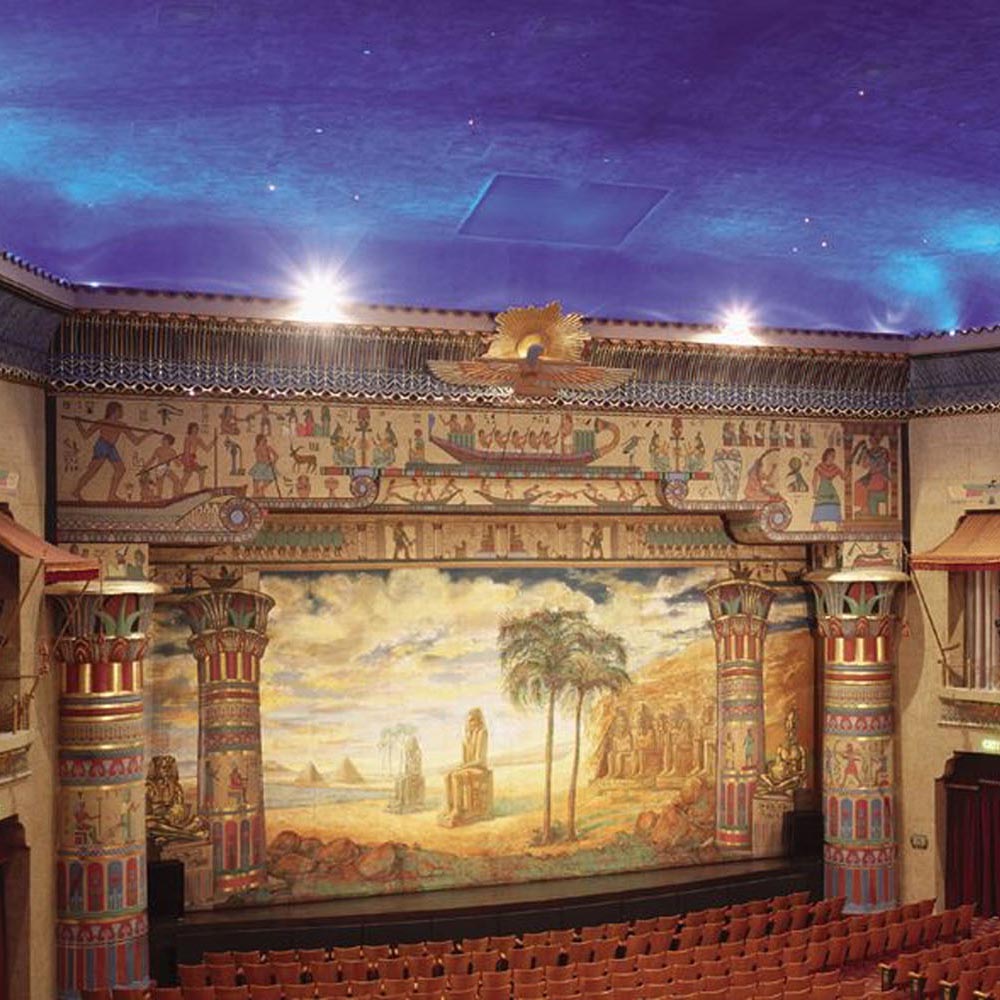 The Egyptian Theater was built by Harman W. Peery & Louis H. Peery, sons of the deceased pioneer businessman David H. Peery. The site was that of the Arlington Hotel, previously ravaged and burned to the ground by fire.

The Peery Brothers announced that the new movie theatre would be “The Showplace of the West”. The architects undertook a research trip to the US West Coast, and it’s reported that Grauman’s Egyptian Theatre in Hollywood strongly influenced their designs for the new theatre.

The 1,200-seat theatre opened in July 1924, built at a cost of $250,000. The auditorium was designed to represent an Egyptian temple court with a dome ceiling decorated to represent the desert sky. The overall effect of the architecture made going to a movie an event to remember, rather than just a night out on the town.

At the theatre’s dedication it was noted that “an almost perfect replica of an Egyptian temple by the Nile built centuries ago has been placed in a modern city, as if by magic. It is a perfect reproduction of the art of a dead past”.

A system of small electric lights in the “sky” ceiling originally produced the effects of night, golden sunsets, and the silver light of dawn or moonlight. A cloud machine projected moving clouds onto the blue sky dome. The theatre was equipped with a 2-manual, 11-rank Wurlitzer pipe organ (opus 833).

While it was boasted that the Egyptian’s designs and hieroglyphics were painstakingly researched and accurately reproduced throughout, one can find examples in the lobby where impish 1920’s artisans inserted some not-so-authentic symbols. The story goes that these workers summoned Harman Peery to the lobby one day to reveal where they had placed his name in Egyptian on a wall panel for all to see. He was depicted as a stick-figure of a drunk leaning on a lamppost. Mr. Peery bought into the joke. The bogus hieroglyphic remains to this day.

in 1929. This downgraded the role of the house pipe organ, which was occasionally used during intermissions and other programs. In 1960, the organ was removed and put into storage.

In 1953 with the arrival of the CinemaScope format, the two inner-proscenium columns were removed to accommodate a much wider projection screen. The first CinemaScope presentation was The Robe

In 1961 there was a major remodeling of the theatre which saw a larger projection screen installed in front of the proscenium arch. Many of the details of the original theatre were painted over or removed, including the original Egyptian murals on the auditorium sidewalls being covered by acoustical tile. Capacity was reduced to 850 with increased legroom and reconditioned seats designed to increase patron comfort. The Egyptian would continue as a first-run theatre for another 20 years.

In the early 1980s the theatre was reduced to a second-run movie theatre before being ordered to close by county authorities in December 1984 for health code violations. The theatre was threatened on many occasions with demolition, as it sat, boarded up and unused, and surrounded by empty buildings.

A completed restoration of the theatre, undertaken by Conrad Schmitt Studios of New Berlin, WI, was completed within two years. The restored theatre reopened in January 1997. Major donations for the theatre’s restoration came from Dr. Louis S. and Jan Peery as well as the Utah State Legislature.

The restoration projected earned the theatre an Honor Award from the National Trust for Historic Preservation, and two Merit Awards from the U.S. Institute for Theatre Technology (USITT).

In 2004 the theatre became home to a 3-manual, 18-rank Wurlitzer pipe organ featuring 1,400 pipes and an additional four ranks of voices digitally mastered by CMG Design. The organ was overhauled and installed by Zollman Pipe Organ Services of Wichita, Kansas.