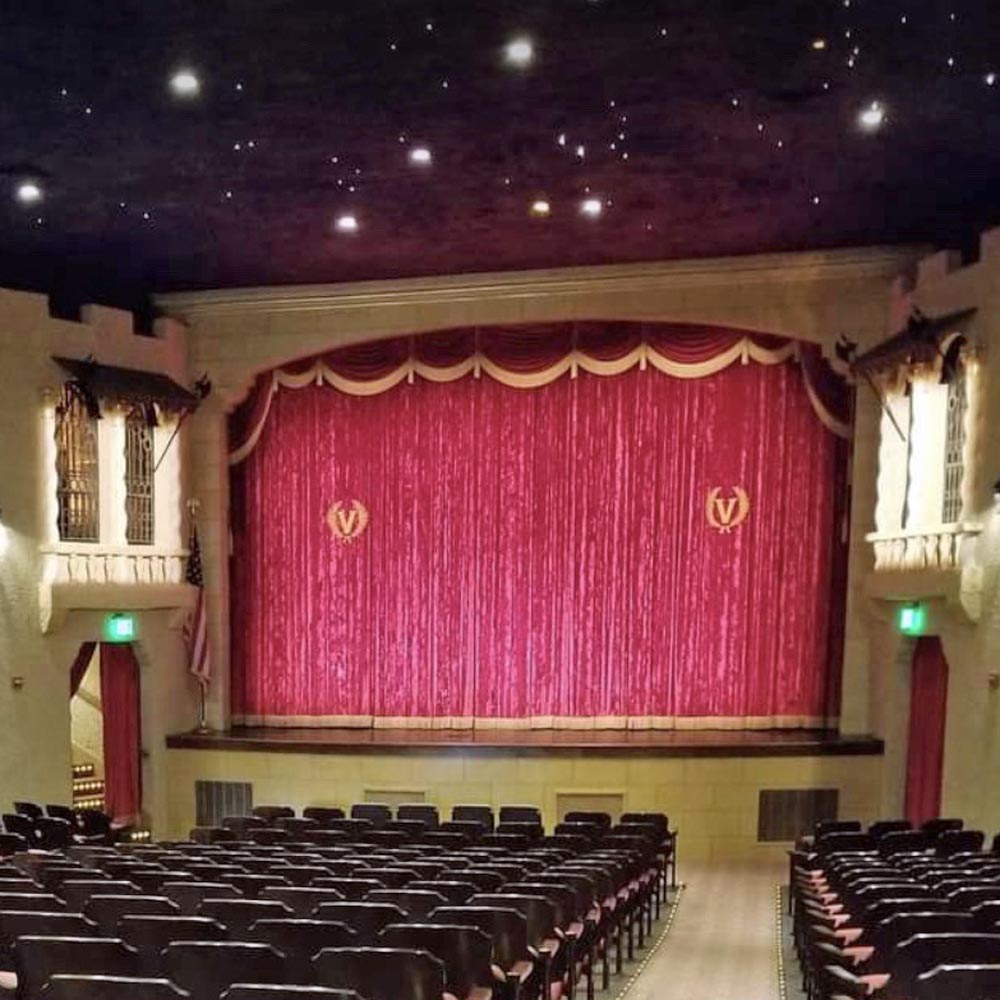 Local artist Ernest Moore “Dick” Viquesney commissioned the theatre at a cost of $45,000 and it was designed by architect Horam Callender, Jr.

The Tivoli Theatre’s exterior was designed in Mission Revival style, its auditorium designed to resemble a Spanish courtyard with twinkling stars in the night sky above.

Originally the Tivoli was equipped with a Wicks organ and a piano to accompany silent movies and stage performances, however these were already starting to be phased out when the theatre opened.

Several people managed the Tivoli over the years, including longtime owners and operators Claude and Edith Flater. After the Flaters sold the Tivoli around 1963, it changed hands a few times before John Walker and Ron Reed purchased it in 1971. The theatre underwent renovations in the 1970s including the addition of an extension to the stage, making it more versatile for live performances. Walker and Reed successfully operated the movie theatre for many years.

Two fires damaged the Tivoli in the 1980s. In 1981 a fire in the adjacent building caused extensive smoke damage to the Tivoli. In 1985 a fire started within the theatre itself, causing extensive damage to the front part of the building, and the auditorium was smoke-damaged a second time.

The theatre abruptly closed in May 1999. Although owner Mike McCracken extensively repaired the building after the 1985 fire, it never fully recovered from the damage sustained and the theatre continued to fall further into disrepair over the next several years due to a leaky roof and vacancy.

Later in 1999, a group called Friends of the Tivoli was created to explore the possibility of rescuing the old landmark from further decay. With the help of an emergency loan from Indiana Landmarks, Owen County Preservations purchased the Tivoli in 2005 to prevent a scheduled demolition.

In August 2012 restoration of the theatre began, funded by the Cook Group, taking the theatre back to looking very close to how it appeared when it first opened in 1928. The theatre reopened in April 2013.

As part of the 2013 restoration the auditorium ceiling's starlight effect was recreated with a constellation pattern matching the star alignment as it would’ve appeared over Spencer at 9pm on 31st December 1928, to pay homage to Viquesney’s vision and the theatre’s history.

Photos of the Tivoli Theatre