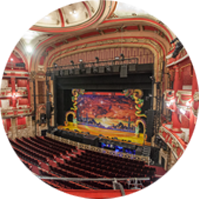 The Bristol Hippodrome was designed by Frank Matcham, a prolific theatre designer in the UK. At its opening the theatre featured a huge water tank at the front of the stage which could be filled with 100,000 gallons (450,000 litres) of water, as well as an opening central dome in the auditorium to allow for ventilation. 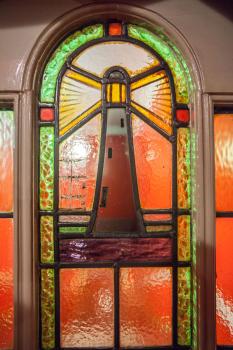 Respecting Bristol’s long-standing maritime connections, the theatre features a maritime theme throughout its Baroque decoration. The Grand Staircase, leading from the entrance lobby to the rear of the Stalls, originally featured backlit stained glass naval battle scenes. A few panels still remain. There are a number of porthole-shaped windows, stained glass lighthouse motifs, and plaster decoration throughout the auditorium styled after knotted ropes.

The auditorium is wide and not overly deep, comparisons having been drawn with the London Palladium. The Stalls / main floor seating is aggressively raked which affords good sightlines from any row, with the minor inconvenience of shallow steps in the aisle. At Grand Circle level there are two rows of three boxes at each side, surrounded by grand Doric columns which rise up between the boxes to support the Upper Circle slips. The Upper Circle remains bench seating although it is now upholstered rather than being plain wood. The proscenium arch is 48ft wide with an elliptical arched top, set within a deep reveal sporting niches either side at stage level, and originally with intricate portraiture in the panels above. 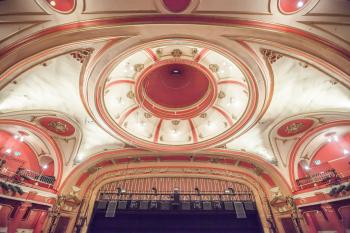 The auditorium’s circular dome can be opened using a sliding mechanism, located on the roof, to provide ventilation. The original painted decoration on the dome’s interior flat ceiling, dome surround, supporting pendentives (featuring nymphs frolicking in the ocean), and at the sides of the proscenium, has all been lost.

The original stage machinery included a 100,000 gallon tank which could be filled with heated water. The rear section of the stage, 40ft by 32ft (12.2m by 9.8m), would lift up so that the front section of the stage, including footlights, could slide backwards underneath it, revealing the massive water tank. The tank was 42ft wide and 27.5ft front-to-back (12.8m by 8.4m), with a maximum depth of 7.5ft (2.3m). Ramps ran from the bottom of the tank up to stage level on either side.

The tank contained four platforms (“tables”), each running the width of the tank, which could be independently raised or lowered to simulate varying depths of water or to create water effects through movement. The position (depth) of each table was relayed to the main switchboard, by wires, so that the operator knew each table’s position within the tank. The orchestra and audience were protected from water splashes by a 50ft long, 6ft high (15.2m by 1.8m) glass screen, which could be raised at the pull of a lever.

A novel feature was a lighting gallery for arc lamps “immediately behind the top of the proscenium, which permitted a fine concentration of light particularly useful for illuminating the water”. From a very grainy photo it looks like this position was immediately in advance of the proscenium, directly above the orchestra pit. No further details have come to light on this lighting gallery as yet. 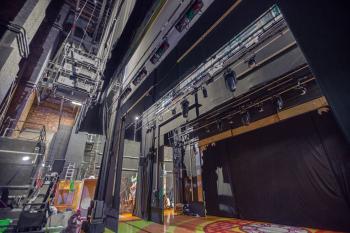 The stage was originally a hemp house, however after a fire that consumed the entire stagehouse in 1948, it was rebuilt with a stronger grid and full counterweight flying system. Being roughly a 60ft+ (18.3m+) cube, it remains one of the largest stagehouses in the UK outside of London.

The stage was originally raked however the rake was removed in 1988. This leads to some confusion as to why radiators are mounted several feet higher than expected on the stage’s rear wall, and explains why there are ramps down to stage level from the dock doors and loading area upstage right.

The theatre is able to accommodate the largest touring shows and, amongst many premieres, was home to the out-of-town tryout of Cameron Mackintosh’s Mary Poppins in 2004, prior to its record-breaking West End and Broadway runs and subsequent national tours.

An often-overlooked feature Front of House is that the Hippodrome utilized a central vacuum system whereby hoses were plugged-in to a local outlet and carried dust/debris away to the central vacuum using a network of piping. It is very rare to see this type of system used in the UK.

The theatre currently seats 1,951, is operated by Ambassador Theatre Group

, and stages shows direct from London’s West End as well as regional tours and local theatre. The theatre’s retractable dome is still operable and was last known to have been opened in August 2017. Click here

to watch a video of the retractable dome operating in 2013.

How do I visit the Bristol Hippodrome?

As of March 2017, theatre tours are available most Saturday mornings and the occasional weekday. Tours commence 10:30am at the main entrance on St Augustine’s Parade. Tours run approximately 2 hours and include several levels of stairs. The tour takes you around front of house and backstage areas, and includes the history, the shows, the stars, and of course a smattering of gossip and ghost stories.

. Advance reservations not required although recommended to ensure your chosen tour is not full. Note: Backstage access is dependent on the visiting company’s theatre operations on the day of your tour and is not guaranteed.

Photos of the Bristol Hippodrome