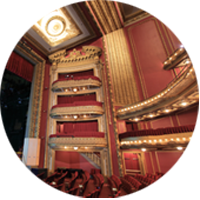 Opened as the Majestic Theatre in 1906 as part of the multi-use Majestic Building, the theatre occupying lower floors and the Majestic Hotel occupying upper levels. Since 1991 the theatre has been owned by the Nederlander Organization; it is currently operated by Broadway in Chicago.

The architects of the Majestic were Chicago-based firm Rapp & Rapp. The containing Majestic Building was designed by architect Edmund R. Krause. 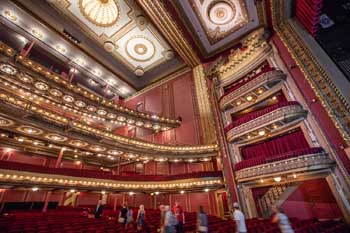 The restored auditorium in 2016

As dictated by Illinois state law at the time, the theatre was designed with racial segregation in mind, and as such patrons seated on differing levels used different entrances. Sightlines within the auditorium also minimized the view of lower-price ticketholders from the higher-price ticketholders.

The Majestic originally opened as a vaudeville theatre and joined the Orpheum Circuit in the 1920s.

The theatre closed in 1932 due to the Great Depression and remained dark for nearly 15 years.

In 1945 the theatre was purchased by the Shubert Organization who reopened it as the Shubert Theatre in September 1945.

At the start of the 1990s the Shubert Organization did not have a subscription series in Chicago and so could not guarantee regular business at the theatre, and it sat empty from June 1990.

In July of 1991 the Nederlander Organization bought the lease on the theatre, taking effect from 1st August that year. The theatre reopened in early November 1991.

In early May 2004 it was announced that the theatre would be known as The LaSalle Bank Theatre, in exchange for an undisclosed sum toward the $25 million renovation of the theatre which would commence in 2005.

The theatre was extensively renovated in 2005-06 and the current color scheme is believed to match the original. Current seating capacity is 1,800 (originally 2,500). The theatre has largely retained all its original fixtures and fittings including intricate lobby paneling, lighting, and mosaic floor. 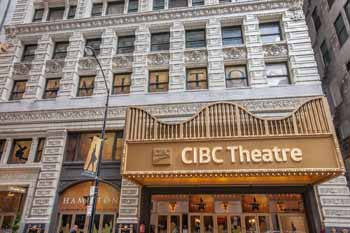 Theatre exterior in 2019 during the run of “Hamilton”

Since 2004, naming rights to the theatre have been sold. Over the years it has been called the The LaSalle Bank Theatre and the Bank of America Theatre.

More recently it was known as the PrivateBank Theatre, until September 2017 when the name was changed to the CIBC Theatre, as a result of the June 2017 acquisition of PrivateBancorp by Canadian bank CIBC.

brings Broadway’s biggest hits to the theatre in addition to premieres and pre-Broadway tryouts, and in late 2016 it became home to the only resident production of Hamilton in the US outside of Broadway. The long-running production closed on 5th January 2020.

How do I visit the CIBC Theatre?

Tours are available through Broadway In Chicago

. Public tours run every Saturday at 11am and visit two of the three Broadway in Chicago venues: the Nederlander Theatre (previously known as the Oriental Theatre), the Cadillac Palace and the CIBC Theatre. Tours cost $16 plus fees when booked in advance online. Walk-up tickets (no fees) are available at the theatre Box Office unless the tour is already full, but check which theatre the tour is set to depart from for your chosen date. Photographs are not allowed inside auditoriums which have a show in place. Information correct as of May 2019.

Photos of the CIBC Theatre