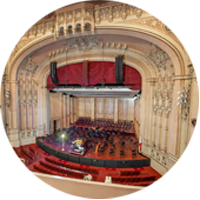 Copley Symphony Hall opened in November 1929 as the Fox Theatre, a luxurious movie palace catering to 3,000 patrons and the third-largest single screen on the US West Coast. After a period of closure during the late 1970s and early 1980s, the theatre was gifted in 1984 to the San Diego Symphony and renamed Copley Symphony Hall. 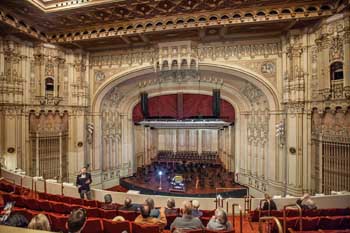 Philip L. and Theodore Gildred built the theatre, engaging architects W. Templeton Johnson and William Day, of architectural firm Weeks and Day. The general contractor was the William Simpson Construction Company. The auditorium is styled in a Rococo theme with roots in Spanish Baroque and the French Renaissance. Anthony Heinsbergen’s company executed much of the elaborate decoration. The theatre is believed to be the last surviving example of designer William Day’s creative work with this décor.

No expense was spared in building the Fox Theatre and its final price tag was $2.5 million. The theatre opened exactly one week after the Wall Street Crash of 1929.

The San Diego Fox Theatre was set within a four-story mixed-use building, the first floor devoted to storefronts and the upper stories used for offices. A square tower marked by finials signaled to pedestrians and motorists the location of the theatre portion of the building. A vertical neon sign emblazoned with the name “Fox” graced the top of the tower. 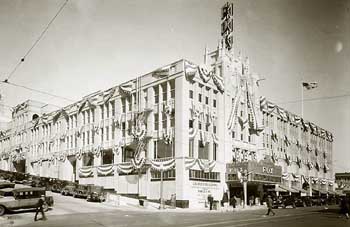 At its opening in 1929 the crowd was estimated at 100,000, at a time when the population of San Diego was just 147,000. Four blocks had to be roped-off to accommodate the crowd. Guests included Jackie Coogan, Buster Keaton, George Jessel, and Will Rogers. When opened, the Fox San Diego was Fox West Coast’s largest theatre.

Because of San Diego’s wide cross-section in its population, the Fox became a choice for motion picture sneak previews. Walt Disney loved the atmosphere so much that he opened all of his movies at the Fox.

A 4-manual, 32-rank Robert Morton theatre organ, containing 3,000 pipes, was installed at a cost of $50,000, featuring five walled chambers within the auditorium. The primary organist was Edith Ducker Steele, who played accompanying music while comedy, chases, drama, and romance filled the screen. When “talking pictures” established their dominance in the mid-1930s, the organ was moved to the back of the stage and forgotten, however in 1967 the San Diego Theatre Organ Group took an interest and restored the organ to its 1932 glory. 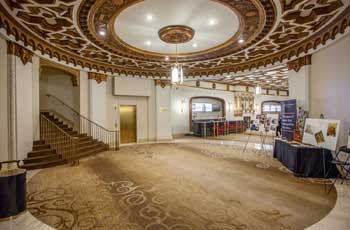 Battling against the uprising of television, renovations took place in May 1977 to accommodate live theatre, however the Fox Theatre closed in the late 1970s and the building was ultimately sold to the City of San Diego.

In 1984 the theatre was conferred to the San Diego Symphony

as part of a complex agreement allowing developers to build a hotel and office building around and above the theatre, which in return would finance the transfer of ownership to the Symphony and allow for refurbishment of the theatre. The theatre was renamed Symphony Hall. The surrounding office tower and hotel complex was built in such a way that no walls of the surrounding complex touch the original walls of the theatre, to preserve its acoustical integrity. Helen Copley, then publisher of the San Diego Union-Tribune, donated $2 million which enabled the deal to move forward and ultimately resulted in her family name being placed on the hall in early 1985.

Additional benefactors to the Symphony have been Joan and Irwin Jacobs, whose name has now been conferred upon the complex as a whole as the Jacobs Music Center. 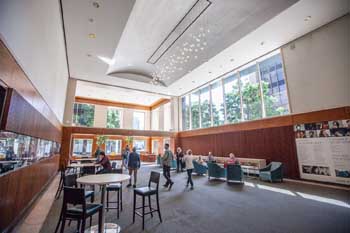 New entrance area created as part of the 1985 renovation

A major $4.75 million renovation was undertaken in 1985, and the Los Angeles-based Heinsbergen Decorating Company, who had decorated the hall for its 1929 opening, duplicated their original decoration during the restoration.

to revitalize the venue with a plan that embraces the theatre’s iconic architecture while enhancing the overall experience. The project, with an estimated cost of $125 million, will honor the history of the Jacobs Music Center’s historic building while greatly enhancing the musical and performance experience for artists and audiences alike. According to principal architects HGA

, key elements of the renovation include: 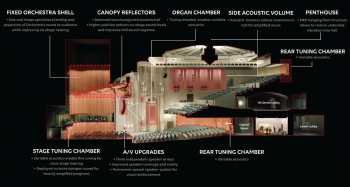 Following the massive revitalization, the reopening of Copley Symphony Hall is anticipated in late 2023.

Copley Symphony Hall is one of the few venues in the world that belongs to the orchestra playing in it.

How do I visit Copley Symphony Hall?

Copley Symphony Hall has been a regular participant in the annual Open House: San Diego event, which ran for its third year in March 2019. For more details visit the Open House San Diego website