<< Go Back up to Region ‘Washington DC’ 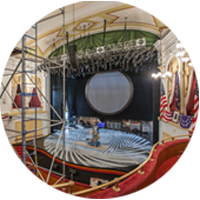 Ford’s Theatre opened in August 1863 under the direction of Baltimore-based theatre entrepreneur John T. Ford. The theatre is best known as the site of the assassination of US President Abraham Lincoln on April 14, 1865. The theatre is now part of the Ford’s Theatre National Historic Site and is open to the public daily in addition to being a working theatre. 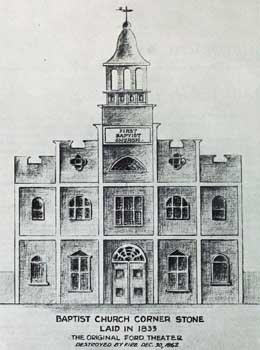 The original 1833 church building, adapted into a theatre in 1861

Theatre entrepreneur John T. Ford had bought the previous building – a church dating from 1833 – from the First Baptist Church of Washington in December 1861, and adapted it for use as a theatre. Ford rented the theatre to George Christy who immediately began advertising the new theatre as The George Christy Opera House.

Given positive public response to the new theatre venture, Ford closed the theatre near the end of February 1862 and invested roughly $10,000 in improvements, reopening a few weeks later in mid-March as Ford’s Atheneum. Improvements included a third level of seating which was called the Family Circle. The National Intelligencer hailed the completion of the theatre as fulfilling a long felt need for a first-class theatre, thereby affording Ford an advantage over his principal rival Grover who was desperately trying to open his Grover’s National Theatre (now the National Theatre) a few blocks away.

In December 1862 Ford’s Atheneum succumbed to a devastating fire caused by a faulty gas meter in the basement. Ford immediately set about rebuilding the theatre, larger and more magnificent than before, and opened what is now the current theatre building as Ford’s New Theatre on 27th August 1863. 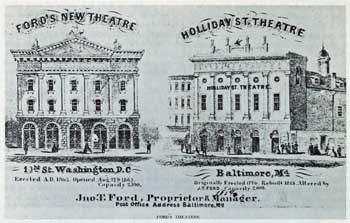 Ford’s New Theatre enjoyed much success during its first two seasons and was considered superior to Ford’s rival Grover at the National Theatre. The President and/or the First Family attended eight performances at the theatre between 1863 and 1865.

The theatre featured eight boxes flanking either side of the forestage in front of the Proscenium Arch. The lower boxes were accessed from the Orchestra level and seated lower than the stage, such that patrons’ eye-lines were roughly at stage floor level. The upper boxes, accessed from either side of the Balcony, afforded unobstructed views of the stage and auditorium. Box 7 and Box 8, on the House Right side, featured a divider that could be removed to create the “Presidential Box”. 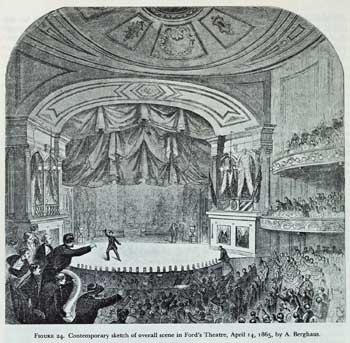 A sketch of Lincoln’s assassination

On the day of his assassination President Lincoln had tickets for “Aladdin and the Wonderful Lamp” at the National Theatre, however Lincoln acquiesced to his wife’s preference of seeing British stage actress Laura Keene in “Our American Cousin” at Ford’s New Theatre. Famous actor John Wilkes Booth, in a desperate attempt to aid the Confederacy, sought out Lincoln in the Presidential Box and shot him from behind. Tad Lincoln, the President’s youngest son, who had attended the performance at the National Theatre, only learned of his father’s assassination while waiting for his carriage in the lobby of the National.

Ford attempted to reopen the theatre on 7th July 1865 however due to threats made against him no performance was given that night and patrons were instead refunded. The theatre was subsequently taken over by the Government for use as office building, paying Ford $1,500 per month in rent. A year later Ford was paid $80,000 in final settlement for the Government’s purchase of the building and for the next few years the building was used by the War Department. 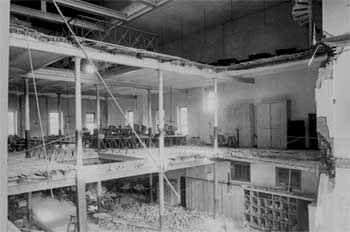 In June 1893 a 40-foot section of the building’s façade collapsed from the third floor, killing many War Department clerks and injuring nearly 70 others. The building was repaired and continued as a government warehouse and storeroom until 1911. The building then sat vacant for many years until it changed hands to the Office of Public Buildings and Parks of the National Capital in 1928. A Lincoln museum was opened in the building on the 123rd anniversary of Lincoln’s birthday (12th February 1932) and in 1933 the building was transferred to the National Parks Service.

After a lengthy campaign to restore the theatre, funding was approved in 1964. Despite much searching, original plans for the building could not be found and have never come to light since. Lengthy investigative work was undertaken to extrapolate floor levels and wall locations from known “good” points in the building, with photographs and drawings providing supplementary detail. The National Park Service has a small gallery of images from the restoration that highlight just how considerable a project it was (see “Further Reading” section, below). Restoration was completed in 1968 and the theatre reopened on 30th January 1968. Following its restoration the Presidential Box is never occupied. 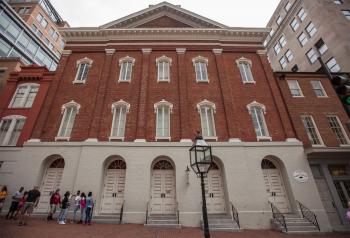 The theatre underwent another restoration in the 2000s, reopening on 11th February 2009 with a gala performance commemorating Lincoln’s 200th birthday.

Unusually for current US theatres, Ford’s Theatre’s stage retains its original rake of 7/16 of an inch per foot. Set designer Court Watson calls designing for the rake at Ford’s Theatre a “challenging treat”; Watson says raked stages made performers easier to hear in a time before microphones existed, explaining that the rake “forced the performers [to move] downstage, closer to the audience. In an era before theatrical lighting, it also helped the performers be [lighted] in the same space as the audience”.

Ford’s Theatre is now a popular Washington DC tourist attraction in addition to being a working theatre, and welcomes over 650,000 visitors per year.

How do I visit Ford’s Theatre?

Ford’s Theatre is a very popular Washington DC tourist destination in addition to being a working theatre presenting a varied schedule of theatrical and live entertainment events. Ford’s Theatre welcomes more than 650,000 visitors a year. In common with most Washington DC attractions, visitor security checks are in operation at Ford’s Theatre.

The theatre and museum are open daily, generally 9am to 4:30pm although the schedule can vary. The schedule is available on the Ford’s Theatre website

. Tickets, available for the theatre, the museum, or both, are timed-entry every half hour and cost $3 for all visitors. Visiting both museum and theatre takes around two hours.

. A limited number of same-day tickets are sold on a first come, first served basis, with the Box Office opening daily at 8:30am (closes 5pm). Further information on daily tours is available on the Ford’s Theatre website

Guided tours, limited to 20 participants, run at 5pm on select Sundays. These tours last one hour and usually included access to the Orchestra, Balcony, view into the Presidential Box, and the Stage. Check the theatre’s website for the guided tour schedule and to book online