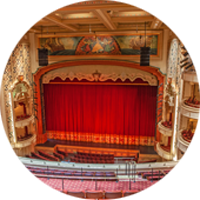 The Granada Theatre is Santa Barbara’s oldest standing movie palace and the tallest building in the city. Opened in May 1924, the Granada famously survived the devastating earthquake of 1925. A major renovation took place in the early 2000s, and in 2008 the theatre reopened as the destination for large-scale touring productions, and the new home for multiple Santa Barbara-resident companies including the Santa Barbara Symphony and Opera Santa Barbara.