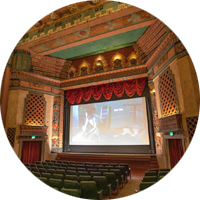 The Mayan Theatre opened as a single screen movie theatre in late 1930, and is one of only a few Mesoamerican themed theatres throughout the United States. After a period of neglect the theatre was brought back into use in the early 1980s. 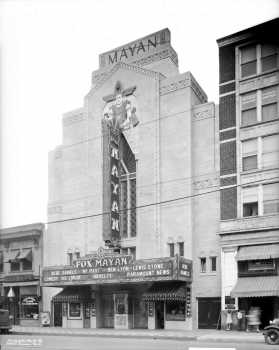 The 966-seat Mayan Theatre opened with a spectacular dedication ceremony based upon those performed by the ancient Maya for the dedication of new temples.

Fascination with Mexican art and culture in the United States during the 1920s and 1930s was a big reason for the popularity of the Mayan Revival style of architecture at the time. Many hotels and theatres were built in the Mayan or Aztec Revival styles, such as the extant Aztec Hotel in Monrovia, California. The Mayan is one of only three remaining theatres to have been designed in the style, the other two being the Aztec Theatre in San Antonio, Texas, and the Mayan Theatre in Los Angeles, California. The 3,500-seat Fisher Theater in Detroit (opened 1928) was originally a very fine example of the style, however was renovated into a smaller 2,100-seat playhouse at the start of the 1960s and given a new mid-century décor.

Fascination with Mexican art and culture in the United States during the 1920s and 1930s was a big reason for the popularity of the Mayan Revival style of architecture at the time. Many hotels and theatres were built in the Mayan or Aztec Revival styles, such as the extant Aztec Hotel in Monrovia, California. In terms of theatres there are only three thought to still exist in the United States: the Mayan in Denver, the Aztec Theatre in San Antonio, Texas, and the Mayan Theatre in Los Angeles, California.

The 24-hour ceremony began at dawn as Indian performers ascended to the roof holding lighted torches. They then proceeded throughout the entire building using the torches to drive off evil spirits. The Chief Medicine Man concluded the ceremony by painting a design in colored cornstarch on the sidewalk in front of the theatre.

A small 2-manual 8-rank Wurlitzer theatre organ (opus 949) was installed into the theatre for its opening, having been transplanted from the Liberty Theater in Astoria, Oregon. The organ was removed from the Mayan in 1945.

The theatre originally operated as a Fox first-run theatre for many decades, and was one of the most popular movie theatres in Denver.

After many years of being managed by Fox Intermountain Theaters Inc., the Mayan came under the management of National General Corporation, and later Mann Theatres who operated it until the theatre closed in 1984.

The theatre’s then owner, Union Bank & Trust, announced plans to demolish the theatre. Newspaper headlines proclaimed “Mayan Demolition Appears Certain”. However, a grassroots preservation organization Friends of the Mayan was formed to promote alternatives to demolition. With the support of a broad range of community and civic groups, city officials, and members of the community, the plight of the Mayan received wide public recognition. Despite protestations from the owner, the theatre was designated as a Denver Historical Landmark in early 1984. 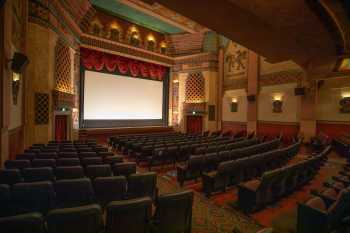 The theatre’s then owner secured demolition permits, however following the historical designation a 90-day demolition delay was granted to allow additional time for negotiations with the owner. At the same time, Denver Broncos owner Pat Bowlen and business partner Dick Landon were in negotiations to buy the bank which owned the theatre. The deal went through, and a call from former Mayor Frederico Pena to Bowlen’s team requested that they keep the theatre as-is.

In 1986, following a $2 million renovation and conversion, the theatre re-opened as a triplex. The balcony was walled-off and two new theatres created in the old balcony space. The main floor remained as the main screen with a new projection booth added at the rear of the seating.

The exterior of the building was also renovated and the stained glass ruby in the Mayan Indian chief’s headdress on the façade was relit. The original marquee was recreated from historic photos, minus the “Fox” lettering rising above the center of the marquee. The theatre’s original vertical sign was also restored.

The theatre has been operated by Landmark Theatres

Photos of the Mayan Theatre