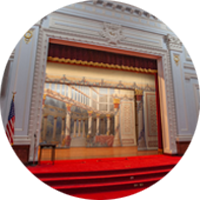 The cornerstone for the Tucson Scottish Rite was laid on 8th December 1915, with the cathedral being dedicated on 15th May 1916. The main meeting room houses a stage with full-height stagehouse, fitted-out with a counterweight flying system and numerous painted backdrops furnished by Sosman & Landis of Chicago in 1915.

There had been a Masonic Lodge in Tucson on-and-off from 1875 however it was not until 1903 that membership flourished and the Lodge moved-in to the second floor of the Opera House on East Congress Street (the Opera House was known as the State Theater from 1937 then demolished in the 1950s). 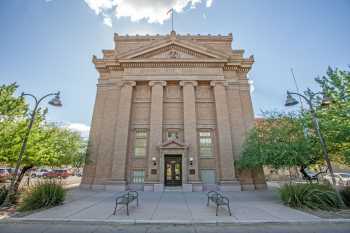 Plans for larger accommodations had been discussed prior to Arizona Statehood, but it was not until late 1915 that the cornerstone of the new Scottish Rite Cathedral was laid on South Scott Avenue. The architects for the new building were Trost & Trost of El Paso, and the general contractor was Weymouth Crowell of Los Angeles.

The building was completed in April 1916, its façade executed in Neoclassical Revival style. The building was reported to have cost “at least $150,000” and was officially dedicated on 16th May 1916. The Tucson Citizen reported that the stage was furnished at the cost of $20,000.

The M.C. Lilley Company of Ohio subcontracted Chicago-based Sosman & Landis to provide the stage machinery and many painted backdrops. The backdrops and counterweight flying system are still in use today. 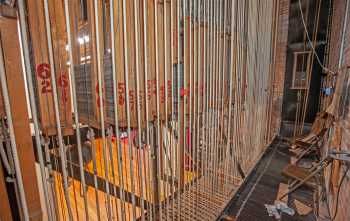 The “Brown’s Special Counterweighted” system installed at the Tucson Scottish Rite is a cabled-guided single purchase counterweight flying system featuring wooden arbors (cradles) on three-inch spacings, operated from the stage floor or fly floor, Stage Right. Rope locks were not necessary as the permanently-hung scenery allowed for exact counterweighting, plus the inefficiencies of the system (e.g. multiple sheaves/pulleys without bearings) contributed to resisting movement. The “Brown” moniker has been generally attributed to M.C. Lilley’s salesman of the time, Bestor G. Brown, however following investigations by Wendy Waszut-Barrett

The building included a 3-manual 22-rank organ, built by the California Organ Company in Van Nuys, CA, which was reported to have cost $10,000. Although not fully completed at the cathedral’s dedication, it was nevertheless pronounced a splendid instrument by the musicians present at the dedication.

The audience at the dedication were treated to sight of three sets of the new stage scenery: a Dungeon / Stone Vault, “The Crucifixtion” [sic], and a Cathedral setting. The Tucson Citizen reported that a total of 79 backdrops had been supplied. 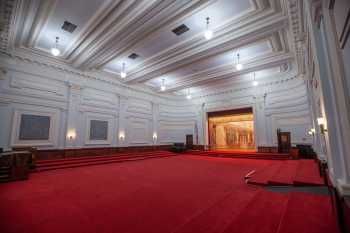 The Red Room at the Tucson Scottish Rite

The organ was upgraded in 1937 by its original designer, Stanley W. Williams, by then working for the Aeolian-Skinner Organ Company. The updated organ (reportedly Opus 952-A) received 25 ranks.

An addition to the building, costing $310,000, was completed in 1951 and is known as the “Ochoa Addition” or “Peter E Howell Addition”, the latter in honor of the Venerable Master of 1911-12. The addition extends the original building to the north, its main feature being several large and stately meeting rooms.

In 1979 the building complex was placed onto the National Register of Historic Places as a contributing building to the Armory Park Historic Residential District.

The main meeting room with adjoining stage is known variously as the Grand Parlour, the Roskruge Room (in honor of Venerable Master George J. Roskruge), or most regularly as the Red Room – due to its striking bright red carpet.

How do I visit the Tucson Scottish Rite?

The Tucson Scottish Rite does not offer regular tours however staff on-site may well be happy to show interested parties around the facility. You can also check out their events calendar

Photos of the Tucson Scottish Rite