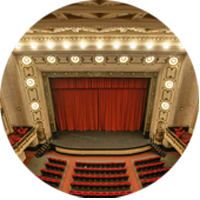 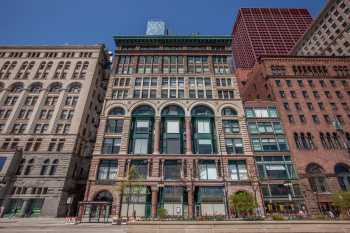 The building façade dates from 1885

Chicago-based architect Solon S. Beman designed the building in 1884 as a showroom and factory for the Studebaker Brothers Manufacturing Company, at the time the largest producer of horse-drawn vehicles in the world.

The building opened in 1885 with a large showroom and service facility at street level, with factory manufacturing space above. By 1896 the Studebakers had outgrown the building and moved to a larger facility. They subsequently contracted Beman to convert the building into an artistic and literary center. 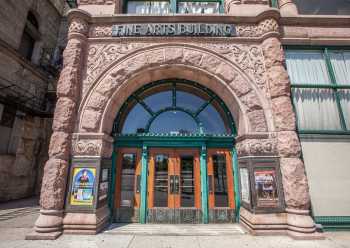 Entrance to the Fine Arts Building as designed in 1898

In 1898 the building reopened as the Fine Arts Building, the intent being “to provide a central point for the cultivation of music ... as well as the higher arts, and a place where the results of study and the accomplishments of noteworthy things in art could find expression in a way that would prove beneficial to the public”.

The new Studebaker Hall occupied the street-level space where the carriage showroom had previously been located, and opened in late September 1898. A second, smaller, venue was created next to Studebaker Hall, called University Hall and intended for recitals. It opened on 4th October 1898.

The upper floors of the building were used as studios or offices for musicians, artists, writers, architects, and artistic organizations. Notable tenants include Frank Lloyd Wright, L. Frank Baum, the Chicago Women’s Club, and the Chicago Musical College. 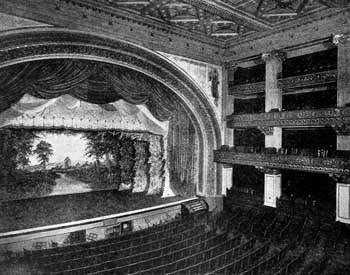 Studebaker Hall, as designed in 1898

Studebaker Hall looked quite different to the current Studebaker Theater due to a major renovation in 1917. The hall originally featured a curved proscenium arch with box seating arranged in three galleries. 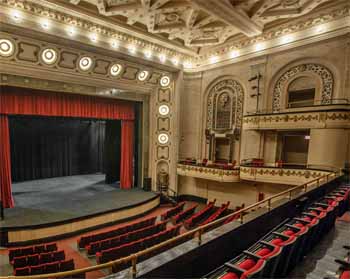 The Studebaker Theater, as re-designed in 1917

Studebaker Hall was noted for its excellent acoustics and beautiful interior. It was used for popular music, recitals, meetings, light opera, and plays.

The hall was originally outfitted with a 3-manual, 49-rank Kimball organ, visible at the House Right side of the Orchestra Pit in early photos of the hall.

The organ was dedicated on 24th February 1899 with “a fine musical program, in which a number of prominent artists took part, to the pleasure of a very large and fashionable audience”. “Music” magazine of March 1899

It is not known if the organ was removed as part of the 1917 remodel or removed at a later date. 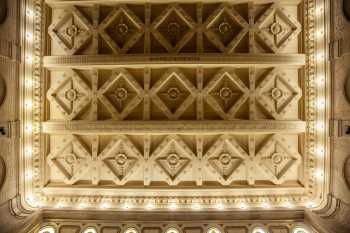 The 1898 ceiling, the only part of the auditorium to survive the 1917 renovation

Connor & Dillingham of New York leased the hall in 1907, then Klaw & Erlanger took over in 1913. The Shubert Organization assumed the lease in late 1917 and undertook a major renovation (architect Andrew N. Rebori is credited with the new main floor, balcony, gallery, stage, and remodeled proscenium arch) giving us the Studebaker Theater we see today. Only the ceiling of the 1898 hall remained. The theatre re-opened on 1st November 1917.

A 1922 entry in the Chicago Central Business and Office Guide lists the seating capacity of the Studebaker Theatre [sic] as 1,330.

Throughout the 1930s and early 1940s the theatre was leased to a number of operators. In 1944 the Central Church took on the lease and held services within the theatre until early 1950. 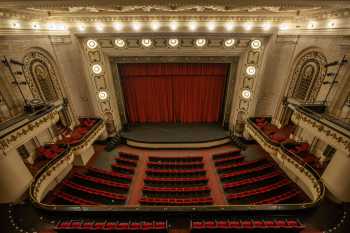 NBC used the theatre as a television studio from 1950 until 1955, with some of the earliest live television broadcasts coming from the theatre.

In 1956 the Studebaker was reopened as a theatre and was managed by a number of operators, including the Nederlander Organization, with events becoming ever more sporadic until the theatre closed in October 1982.

The smaller venue adjacent to the Studebaker Theater, originally opened as University Hall in 1898, was renamed the Music Hall sometime around 1903 when it had a balcony added.

Further remodeling of the Music Hall took place in either 1908 or 1912 and it was renamed the Fine Arts Theater. In 1912 it was completely rebuilt, with further renovations taking place in 1916/17 (in line with the major changes to the Studebaker Theater next door), when it was renamed the Playhouse Theater. Seating capacity of the Playhouse Theater was listed in the 1922 Chicago Central Business and Office Guide as 630. 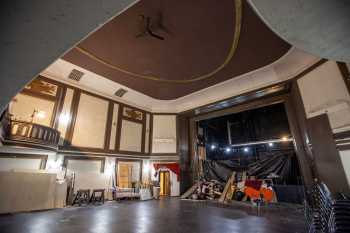 The Playhouse Theater in 2019

In April 1933, just prior to the 1933-34 Chicago World’s Fair, the Playhouse Theater was renamed the World Playhouse, essentially becoming Chicago’s first dedicated foreign and art film theatre. The World Playhouse closed in 1972 however was renovated and reopened in 1980 playing host to chamber music concerts.

In December 1982 M&R Amusement Company announced their intention to convert the Studebaker Theater, and the adjoining smaller theatre, into arthouse movie theatres. The Studebaker would seat roughly 1,200 and the Playhouse 550, with both theatres opening on Christmas Day 1982. The Playhouse occasionally staged live performances.

In 1983 the stage of the Studebaker was converted into a third screen seating 240, and the stage of the Playhouse followed suit, creating a fourth screen for 158, in 1984. The entire operation eventually closed in 2000. 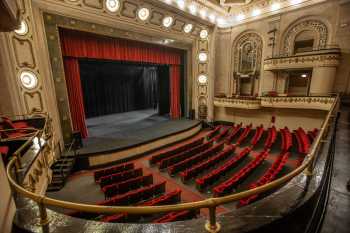 The Studebaker Theater in 2019

In 2005 the Fine Arts Building came under new ownership in the form of Chicago real estate mogul Robert Berger, and managed by his company Berger Realty Group (BRG). The Studebaker Theater started undergoing renovations in 2014, and reopened in October 2015 with seating capacity for 740 on the Orchestra and Mezzanine levels. The Gallery level is closed to the public. The Playhouse Theater remained closed awaiting renovation.

In August 2021, news of a major $3 million renovation of the theatre

was announced by new artistic director Jacob Harvey. Work commenced in Fall 2021 and was completed in Spring 2022. Fox 32 Chicago reported on the project’s progress

in late February 2022, and in late May 2022 the Chicago Sun-Times covered the almost-complete project with the headline Tucked inside Fine Arts Building on South Michigan Avenue, a 125-year-old theater is reborn

. Seating capacity after renovation is 600, and the theatre reopened on 28th May 2022 with new musical “Skates”.

The renovation project included a “gut rehab” of the Playhouse Theater next door, which reopened after renovation as the Carriage Hall Theatre. It is hoped the two historic theatres will be filled with the work of resident companies such as Chicago Opera Theater

The Fine Arts Building contains a manually operated public elevator, one of only a handful left throughout the U.S.

How do I visit the Studebaker Theater?

The theatre is open only for special events. You can view a calendar of event on the building’s website here

Photos of the Studebaker Theater