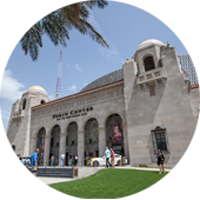 The Tobin Center for the Performing Arts was completed in 2014. It is built on the site of, and incorporates parts of, the 1926 San Antonio Municipal Auditorium. The Tobin Center has two main performance spaces, an additional outdoor Riverwalk performance plaza, and several flexible interior event spaces. 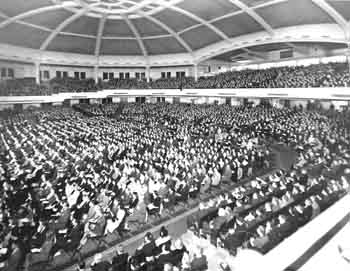 The San Antonio Municipal Auditorium was built as a memorial to American soldiers killed in World War I and was designed by Atlee Ayres in a Spanish Colonial Revival style.

The main auditorium was reported to have sat 6,500, looking onto a large stage with a proscenium arch 44ft high. The Orchestra Pit was mounted on a hydraulic lift and could be moved from regular height – below the stage, up to the stage level. 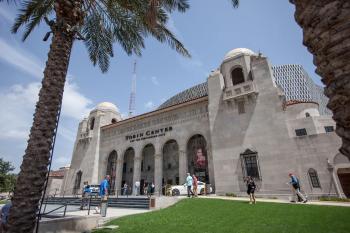 A major fire in January 1979 destroyed the roof and interior of the municipal auditorium. It was added to the National Register of Historic Places in 1981, and a renovated and modernized auditorium was opened in 1985 seating 4,884.

A $142 million project to redevelop the then underutilized building was approved in 2010. The original façade of the San Antonio Municipal Auditorium was preserved and incorporated into the performing arts center which opened in 2014. The project was designed by LMN Architects in partnership with executive architects Marmon Mok Architecture. 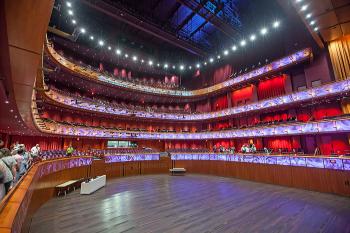 The main performance hall features a flexible “flat-floor” arrangement which allows for automated transformation between a flat ballroom-style floor and theatrical seating. The changeover is automated and operated by a single person.

The H-E-B Performance Hall is one of San Antonio’s primary performance spaces.

How do I visit the Tobin Center for the Performing Arts?

Complimentary tours of the Tobin Center are available to groups of 10 or more. Tours will be scheduled based upon availability. Please call (210) 212-0913

to schedule a tour of the venue.

Photos of the Tobin Center for the Performing Arts