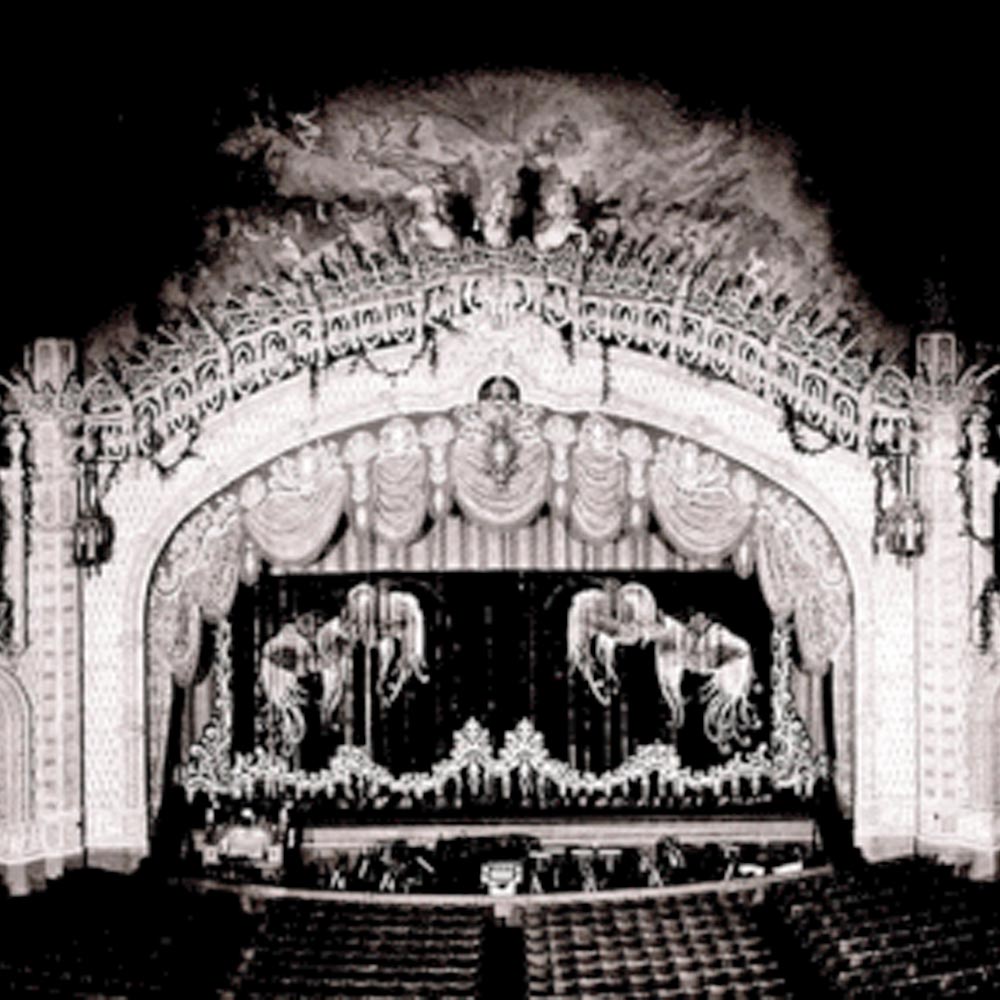 Impresario Louis Guyon first developed plans for the construction of the enormous movie theatre in the early 1920s. Guyon was a leading West Side entrepreneur whose dream was to create and control the West Side’s largest single concentration of entertainment venues. Construction began in 1925, however Guyon’s poor financial planning undermined the project and he sold the uncompleted theatre to the Cooney Brothers, two South Side entrepreneurs, who in turn were forced by their own money woes to abandon the expensive project. The Balaban & Katz Company, the city’s largest and fastest growing circuit of movie theatres, purchased the unfinished theatre to rival the Marks Brothers circuit which was building a new theatre just around the corner from the future Paradise.

on the screen and The Ritz Brothers performing on the stage. The theatre, located in the West Garfield Park neighborhood of Chicago, was designed by renowned theatre architect John Eberson.

A slick advertising campaign mounted by Balaban & Katz encouraged theatre-goers to visit their new theatre using large-format pictorial ads, with copy such as: “Within the dreamlike portals you’ll revel in the wonders of this enchanted playhouse – in the glorious French gardens of Louis XIV as if transplanted in the heart of the great West Side. Foyers reaching into a blue starlit sky above – an acre of seats in a royal fairyland – All this to fascinate you with its haunting and enchanting beauty. Dazzlingly different from any theater in the world!”

The Paradise was billed as the world’s most beautiful theatre and was regarded as one of Eberson’s finest designs; the sheer opulence and intricate craftsmanship made it a showpiece in itself. In the corners of the auditorium, statues of trumpeting angels signaled the approach of Apollo, the sun god, riding behind a team of marble-carved steeds as they raced across the sky above the proscenium arch.

The theater’s marquee, one of the largest ever raised in the city of Chicago, featured a sunburst design, studded with electric lights in ten different colors. The vestibule was equally spectacular, adorned by marble statuary (not the usual plaster) and murals depicting zodiac constellations on the ceiling high above.

When the hard economic times of the Depression caused many Chicagoans to cut back on their trips to the shows, business at the Paradise slumped to devastating levels. The advent of talking pictures exposed flaws in the acoustic design, blamed on the vast domed ceiling in the 3,612-seat auditorium, which cost the theatre its attendance. In 1931, Balaban and Katz decided to close the money-losing theatre until the national economy improved. Although the Paradise reopened in September 1934, featuring a new and modern sound system, its business never fully recovered and the theatre never lived up to the company’s expectations.

In 1956, owners Balaban and Katz decided to demolish the theatre and sell the land to a supermarket chain. The supermarket built on the site is long gone and as of 2020 the site houses an auto repair business.

The theatre was equipped with a 5-manual, 21-rank Wurlitzer organ (opus 1942) and was allegedly one of only three instruments made by the Wurlitzer company to have five keyboards. The organ was removed from the theatre in 1948, to be installed in the Los Angeles home studio of Richard Vaughn who recorded a series of noted stereo record albums in the 1950s featuring organist George Wright. In 1969 the instrument was reinstalled in the Phoenix, Arizona home of William Brown. Brown enlarged the organ to 34 ranks. Since 2007, the organ has been in storage in Phoenix.