<< Go Back up to Theatre Photography Homepage 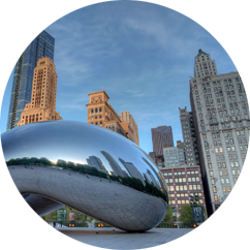 Chicago is home to many historic theatres and boasts a thriving “Broadway in Chicago” production company, formed by the Nederlander Organization in 2000, which programs touring Broadway productions in the city. Until recently, Chicago was home to the only resident production of “Hamilton” in the US outside of New York, which ran from October 2016 to early 2020.

Details of theatre tours in Chicago.

An interactive timeline of all theatres in Chicago.