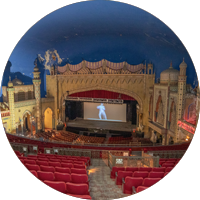 The Avalon Theater opened in 1927, designed in the Atmospheric style with a Moorish theme by renowned theatre architect John Eberson. It was a first-run theatre for many years, then a church, then was renovated and reopened as the New Regal Theater in 1987, however closed in 2003. 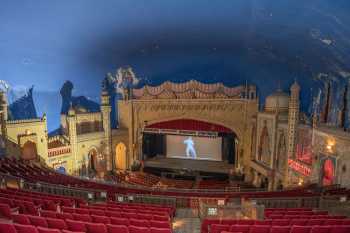 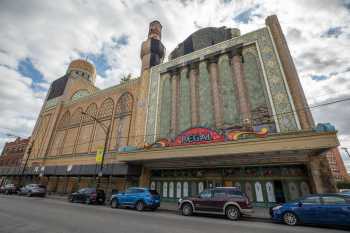 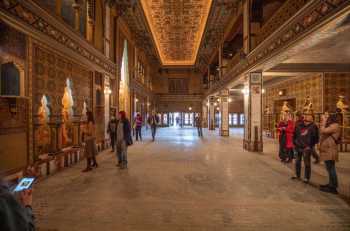 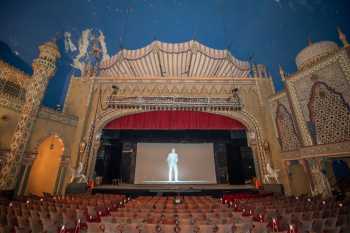 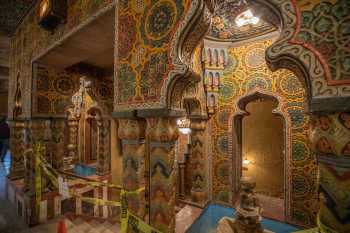 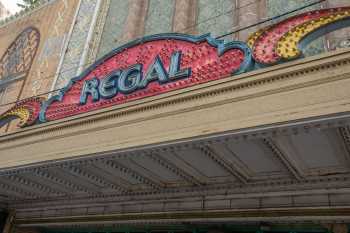 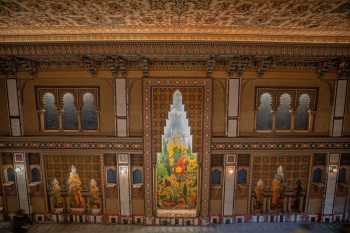 Opened as the 2,250-seat Avalon Theater in August 1927, the Avalon was designed as a combination vaudeville and motion picture theatre and was famous for its elaborate and exotic Middle Eastern interior, described as Persian at the time of opening. 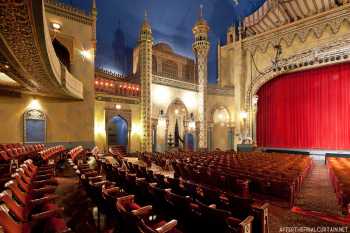 Auditorium in 2012, courtesy After the Final Curtain

The theatre was designed by renowned theatre architect John Eberson, famous for the Atmospheric theatre style he popularized in the mid-1920s, which afforded patrons an escape into exoticism by designing auditoria to resemble outdoor arenas from far-off countries such as Italy and Spain.

The theme Eberson chose for the Avalon Theater was Persian/Moorish, allegedly inspired by an ornate Persian incense burner he found at an antique market in the French Quarter of New Orleans.

The auditorium features authentic Arabic writing on the house left side, with English translations – stylized as Arabic text – on the house right side such as “Welcome To You” and “Be Seated I Beg You”.

The proscenium arch was designed to resemble a fortified wall topped with a cloth canopy suspended on spears. It was a similar design as that used to surround the stage at the Aragon Ballroom in Chicago, also designed by John Eberson and opened July 1926 (a year prior to the Avalon Theater’s opening).

According to After the Final Curtain

, the house right side wall of the auditorium was modeled after a garden with arches at main floor level, a reflecting pool, and stuffed flamingos; the house left side was designed to resemble a Persian palace, with a dome and minarets.

A bridal fountain was located on the house left side, executed in a special plaster inlaid with back-lit tile and foiled jewels.

At the time of building, Eberson noted that the construction of the garden walls and the reproduction of exterior façades in the theatre auditorium permitted the locating of ventilating ducts and other mechanical apparatus, to good advantage, resulting in lower costs. 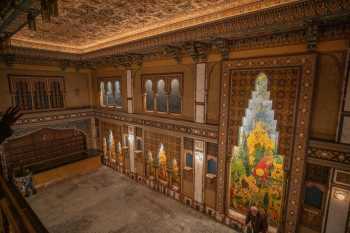 The theatre’s lobby contains many features, the largest and most impressive of which is the ceiling decoration, running most of the width of the entire building and which depicts a flying carpet. The effect is of an ornate Persian rug suspended from the ceiling, studded with glass jewels and surrounded by glass bead lights.

At the main floor level of the lobby, extending fully to the second level, are several wood block mosaics which are set within Persian arches and lit with cove lighting, depicting scenes of Middle Eastern city life – traders bartering their wares and exotic travelers exchanging conversation. The mosaics were designed by Chicago-based architect/artist Charles Morgan, who was later associated with noted architect Frank Lloyd Wright. Following the theatre’s opening, John Eberson described the mosaics as “an individual attraction as well as a harmonizing element importantly contributing to the atmospheric scheme of the Oriental architecture and decoration”.

The lobby also contained twin fountains flanking the stairs descending to the lounges in the basement, but the running water was found to urge patrons to use the restrooms and so the fountains were turned-off at an early stage of the theatre’s life. 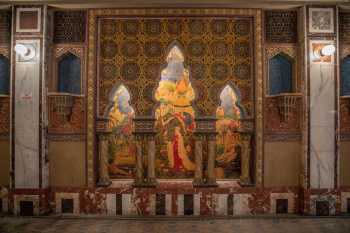 One of the basement lounges originally contained a mirrored aquarium with 1,000 tropical fish, however it was later converted into a fireplace.

A Wurlitzer theatre organ (Style 260 Special; opus 1592) was installed for the theatre’s opening. According to Jon C. Habermaas in March 1999

, by the late 1950s the organ console, pipework, percussion, and main blower had all been taken out of the theatre leaving behind organ chests, relays and regulators. At some point later, and before 1999, the remainder of the organ was removed from the building.

The theatre featured live stage performances until 1934 when the policy changed to film exhibition only, from which time it was a first-run theatre until it closed in 1967.

The building was sold in 1970 and then served as the Miracle Temple Church for 14 years.

In 1985, the building was purchased by Ed and Bettiann Gardner, the founders of SoftSheen

hair care products. The Gardners renovated and reopened the theatre as a performing arts center two years later, renamed the New Regal Theater in honor of the old Regal Theater in Bronzeville, a celebrated cultural center for Chicago’s African American community beginning in the 1920s which had stood at 47th and King Drive in Bronzeville and was demolished in 1973.

In May 1987, the theatre received a $1 million grant for renovations from the Illinois Development Action Grant program. The grant was part of a financial package totaling $4.1 million. 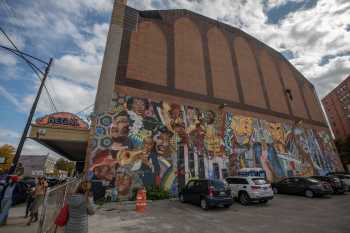 The mural on the theatre’s west façade was completed for the theatre’s reopening in August 1987. Titled “Bright Moments, Memories of the Future”, the mural was painted by Mitchell Caton and Calvin Jones as a who’s who of the legendary artists who performed at the old Regal Theater in its heyday. Stars depicted include Billie Holiday, Dizzy Gillespie, Moms Mabley, Nat King Cole, Stevie Wonder, and Josephine Baker.

After 18 years, in June 2003, the Gardners closed the theatre due to low attendance and the high operational costs of the building.

In 2008 the theatre was purchased by Regina Evans with the help of Illinois State funds of $2.36 million, with the intention of reviving the theatre as a cultural venue. Evans secured an Illinois State loan for $1.25 million for renovations but allegedly used the funds for personal use. The theatre was foreclosed and the Federal Deposit Insurance Corp. acquired it in 2011. It was later sold to Community Capital Investment, LLC.

Jerald Gary, President and Chief Investment Officer of Community Capital Investment Partners, LLC, subsequently purchased the theatre for $100,000. Despite a pledge of $1 million from rapper and Chicago native Kanye West, Gary fought for over 10 years to reopen the theatre while struggling with the crumbling venue’s near-monumental maintenance.

As of 2022 the theatre remains closed, however in March 2022 it was announced

that the Cook County Land Bank Authority had purchased the back taxes owed on the theatre such that the agency would own the property for the next three years while Chicago officials put together a redevelopment plan for the theatre. At that time it was stated that Gary could still pay the back taxes within six months and win back ownership of the building.

The Avalon Regal was one of the theatre’s featured in the 2019 documentary Going Attractions: The Definitive Story of the Movie Palace

How do I visit the Avalon Regal Theater?

event, most recently in October 2022.

Photos of the Avalon Regal Theater