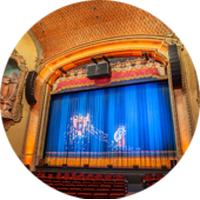 Opened in 1924 as a vaudeville theatre and movie palace, the Balboa was designed in several Spanish styles popularized by San Diego’s 1915-16 Panama-California Exposition. Following an extended period of closure starting in the 1980s, the Balboa underwent an extensive renovation and reopened in 2008. 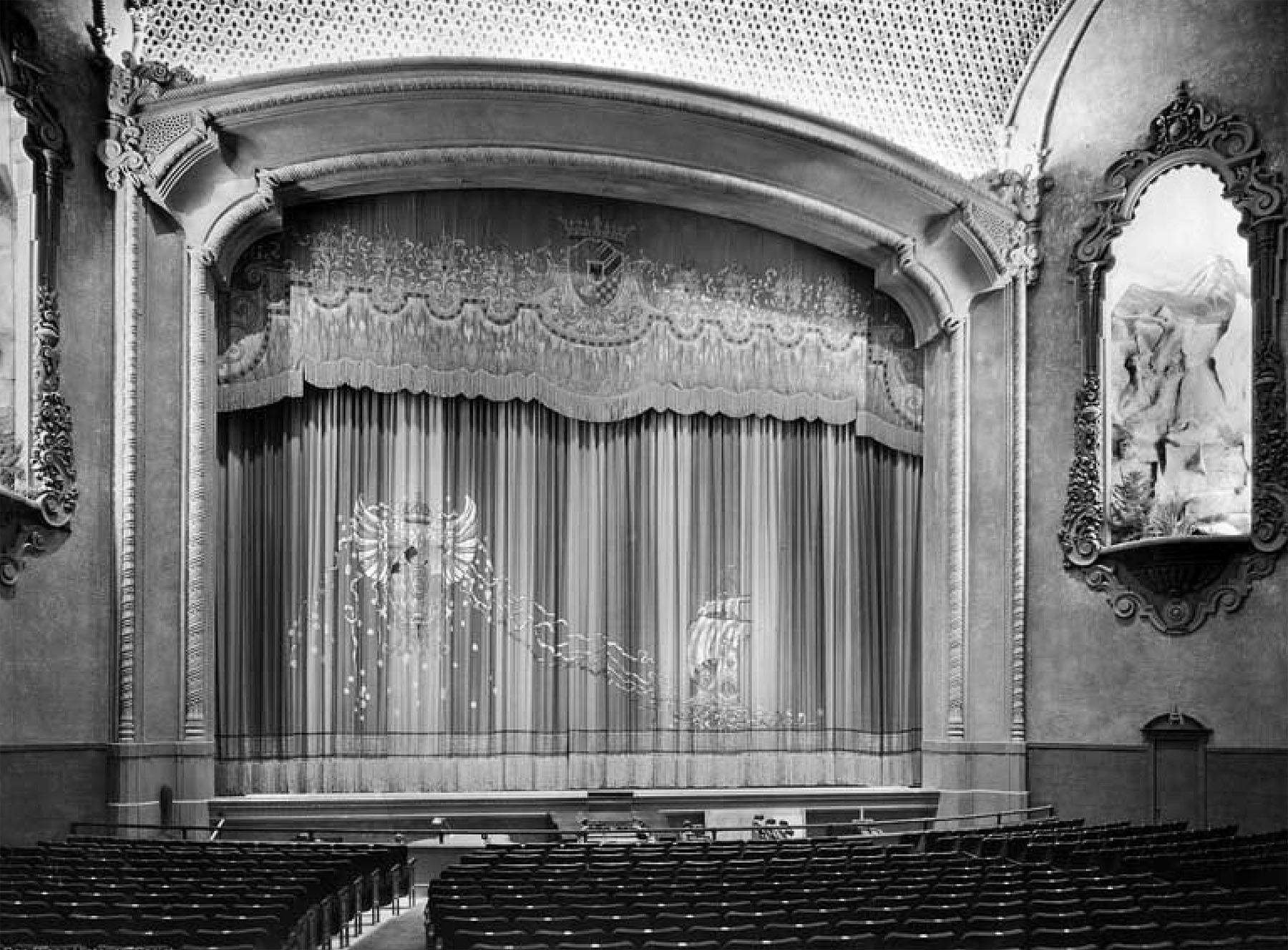 The Balboa Theatre was named for the Spanish explorer Vasco Nuñez de Balboa, the first European to discover the Pacific Ocean in 1513. Built by Robert (Bob) E. Hicks, the building and theatre were designed in a blend of Mediterranean Classicism, Moorish, and Spanish Revival styles by architect William H. Wheeler, who had previously designed the Angelus Temple in Los Angeles earlier in the 1920s. Interior decoration was by Anthony Heinsbergen’s Los Angeles-based interior decorating company.

Wheeler, being an accomplished musical performer in his own right, was familiar with entertainment and the arts. It is claimed that some enhancing features of the Balboa Theatre, such as a generously-sized Orchestra Pit, a large number of dressing rooms, and very good acoustics, were down to Wheeler’s familiarity with the demands of live entertainment and performance. 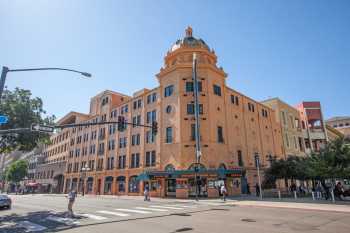 The enclosing Balboa Theatre Building would be described in modern terms as a multi-use building. In addition to the theatre there were retail stores at street level along one side (4th St), with four levels of elevator-accessible office space above them. The office space was commandeered by the U.S. Navy during Word War II for use as SRO accommodation. The old office space is now utilized as office, support, and event space for the theatre.

The exterior of the building fronts onto 4th St on the edge of the Gaslamp Quarter to the east, and Horton Plaza to the north. The focal point of the five-story exterior is the octagonal tower on the building’s northeastern corner which features a [non-original] marquee and vertical sign, both taking advantage of the corner location by being visible from three of the four cardinal directions. 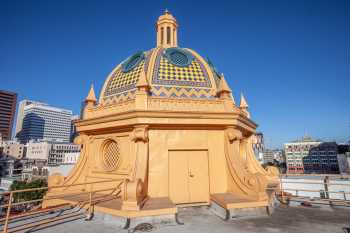 The top of the octagonal tower is capped with a polychrome tiled dome, itself almost three stories high and clearly taking cues from the Spanish Revival theme of Exposition Park’s California Tower. Be sure to scroll down to see photos from inside the dome and its normally secret interior!

Moving inside, the original entrance/ticket lobby at the bottom of the octagonal tower was originally open to the street, but was later converted to an indoor space. The floor features an original mosaic with one of three images throughout the theatre of Balboa’s 16th century sailing ship (the others are a metal miniature ship atop the exterior vertical sign, and the ship depicted on the theatre’s grand drape). Doors featuring deep glass engravings separate the exterior lobby from the main lobby at the rear of the main floor seating.

Both exterior and interior lobbies were extensively altered in the 1950s, with a drop ceiling being introduced to the exterior lobby in the name of “modernization”, and major changes to the interior lobby to accommodate Concessions stands. Several rows of seats at the rear of the auditorium were removed to expand the lobby. Engraved glass windows in the original dividing wall between the lobby and auditorium were removed or plastered over, and a Hot Dog stand replaced one of the staircases to the upper level. The main lobby is small for the theatre’s size and the balcony-level lobby is considered as an equal circulation space however is still small. 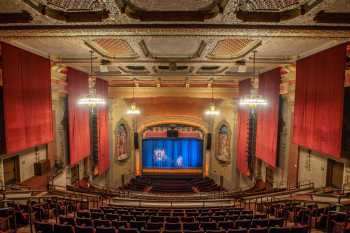 The auditorium has a fine coffered ceiling, regularly-placed pilasters leading up to clear span beams crossing the auditorium ceiling, and a heavy high-level cornice reinforcing the rectilinear treatment of the walls and ceiling. The sum of all these parts was intended to suggest a beautiful Persian rug on the ceiling and panels of rich tapestry on the side walls. Notably unique features are the Islamic-themed open plaster fret work directly above the proscenium which screens the organ chambers above, and the 28ft-high (8.5m) waterfalls flanking the proscenium arch, allegedly designed to assist with air-cooling the auditorium.

The San Diego Union of 28th March 1924 described the waterfalls as follows: “The feature of the interior decoration of the Balboa is said to be unique, is the replica of world famous water falls, created by falling water and the superb lighting effects of the showhouse. For these two immense grottoes, nearly 30 feet high have been built into the walls on either side of the proscenium arch. The lights will play upon the water, which tonight will represent cascades, during intermissions, providing charming diversion”. Although noted as being “world famous water falls”, information is yet to come to light regarding which waterfalls they represent. 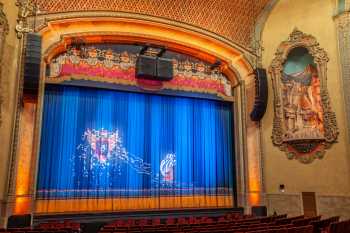 Another notable feature, although not unique, was the Title Curtain which had the appearance of a silver sheet perforated by green holes. The curtain cost $3,000 (just over $46,000 adjusted for 2020) and was demonstrated to the opening night audience, causing them to frequently applaud at the “particularly lovely” combination of colors: “the beautiful metallic cloth curtain seemed to stand at one moment like a rocky precipice, then to change to a blue ice wash, then a scintillating screen of crimson fire as the lights played a color symphony over its lustrous surface”.

Opening night at the Balboa Theatre featured nationally-known acts such as the Fanchon & Marco Sunkist Beauties. The movie industry was represented by stars Conway Tearle and Corinne Griffith who put in personal appearances.

By 1930, Bob Hicks, the theatre’s original builder, was looking into different business ventures and ultimately left the Balboa. Fox West Coast Theatres surveyed the theatre and noted that “The stage portion [...] is quite large and completely equipped for presenting stage performances should they be desired”, not surprising given the Balboa was primarily designed as a legitimate theatre which could also accommodate the screening of movies. 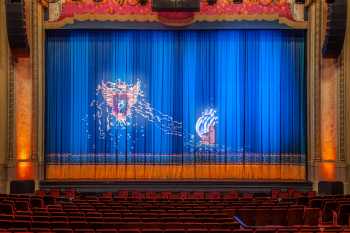 The theatre’s Grand Drape, recreated by iWeiss LLC based upon photos of the 1924 original

Fox West Coast took over, and after approximately two weeks of “extensive alterations” reopened the theatre on 5th December 1930 under the new name of El Teatro Balboa, “a de luxe Spanish talking picture theatre”, to be operated in the same fashion of the big motion pictures houses of Mexico City. The theatre featured live vaudeville and movies accompanied by orchestra and organ. Upgrades included wiring for sound with a Western Electric sound system, new projection equipment, the addition of a new neon marquee at street level, and the addition of the four extant Spanish-themed chandeliers within the auditorium.

In 1946 National Theatres Corporation took over operations. It is unclear if the name reverted to the Balboa Theatre at this time. The SRO housing (converted offices) continued in use as the Balboa Hotel until the mid-1960s.

In 1959 the theatre was sold to Service Auto Parts, et al., in anticipation of demolition. Initial salvage took place with marble and other fixtures being removed, along with the marquee and vertical sign. In early 1960 the theatre was purchased by the Russo family of San Diego to save it from demolition, and reopened as an “action movie” theatre. Balcony seating was removed to avoid the need to meet Union requirements on the number of projectionists required based on the amount of seats. 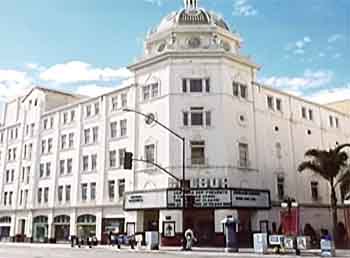 In 1972 the Balboa Theatre was designated as a City of San Diego historic landmark. Five years later in 1977 the City Council voted unanimously to apply to add theatre to the National Register of Historic Places, as part of the designation of the Gaslamp Quarter, however the theatre was specifically exempted from the application by the San Diego City Center Development Corporation (CDCC), who went on to consider plans to gut the theatre for commercial space, intending to strip the interior and build four floors of retail space.

The theatre was not renovated when the new Horton Plaza Shopping Center next door took shape in 1985, and was subsequently acquired by the City of San Diego’s Redevelopment Agency by eminent domain in November 1985. The City condemned the property and closed it in early 1986.

In 1996 the theatre was added in its own right to the National Register of Historic Places, due in no small part to the efforts of the Balboa Theatre Foundation, a non-profit which had been set up around ten years prior, initially as the Save Our Balboa Organization, to fight for the theatre’s preservation. 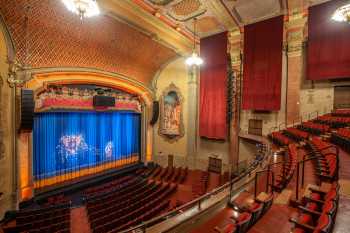 Following the addition of the theatre to the National Register of Historic Places, in October 2002 the CCDC U-turned on their prior position and committed to funding a complete restoration of the theatre, which began in 2005. The $26.5 million project engaged the services of restoration architect firm Westlake Reed Leskosky. One of their noted restoration elements was to design in 1,513 seats, to keep in mind Balboa’s discovery date of the Pacific. The exterior vertical sign and marquee were recreated based upon historic photographs.

In 2008 the theatre reopened after having been closed to the public for over 22 years. Mayor Jerry Sanders used the restored theatre to deliver his State of the City address on 10th January 2008, and public performances began the next day on 11th January 2008.

The Balboa houses a 4-manual, 23-rank Wonder Morton organ which made its debut performance on 27th September 2009. It is one of only five “Wonder” models that the Morton Organ Company built for Loew’s Theatres in the 1920s. Many elements of the Balboa’s organ were originally installed in Loew’s Valencia Theatre in Queens, New York, NY. The Balboa’s original 4-manual, 31-rank organ (Opus 14568) had been moved to Copley Symphony Hall in 1929.

The Balboa is currently managed by non-profit San Diego Theatres

who also manage the San Diego Civic Theatre located just a couple of blocks away.

How do I visit the Balboa Theatre?

The theatre has been a past participant in OH! San Diego, part of the Open House Worldwide organization

and presented by the San Diego Architectural Foundation

Photos of the Balboa Theatre