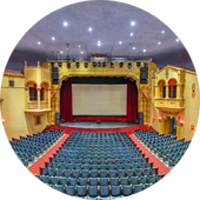 The Fox Theatre in Hanford was built at a time when movies, and in particular “talkies”, were a relatively new phenomenon, but vaudeville entertainment was still a big draw in theatres up and down the country. 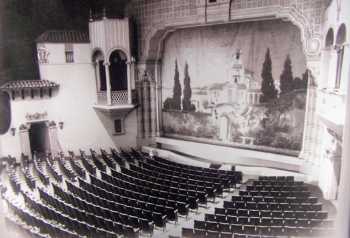 William Fox’s theatre chain built the Fox Theatre in Hanford during the last half of 1929, and the new movie theatre would include full stage facilities as well as dressing rooms and an orchestra pit, so that it could host vaudeville and stage performances in addition to screening movies.

The auditorium, designed in an atmospheric style, was intended to evoke the sense of sitting al fresco within a Spanish courtyard, with a starry sky above on which fleecy clouds would lazily drift past. To complete the picture, the theatre’s fire/safety curtain (still extant) depicted a Spanish village with church bell tower, cypress trees, and terracotta-roofed buildings.

After a long run as a first-run movie theatre, at the start of June 1959 it was announced that Fox West Coast Theatres had come to an agreement to sell the Fox to Theatre Properties Inc. of San Francisco, for approximately $100,000. The theatre was renamed the Hanford Theatre between mid-October and early November that year, when it was also reported to be managed by the West Side Valley Theatres chain. 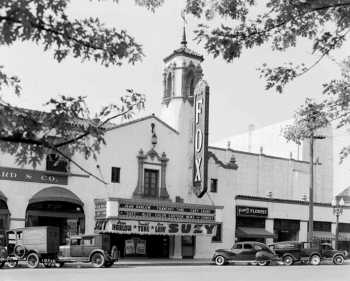 Exterior of the Fox Theatre in 1936

In the late 1970s, Theater Properties Inc. put the theatre building up for sale. There were no takers, perhaps in part due the requirement that any sale be tied to the construction of a new multiplex theatre elsewhere in the local area.

In September 1980, upon finding out that the requirement to build a new multiplex theatre had been removed as a requirement for the sale of the theatre, local historic preservationist J. Daniel Humason decided to buy the theatre building. Humason was concerned the theatre might be purchased by “some out-of-towners who would not be sensitive to the architectural integrity of the building”. The theatre ceased regular operations on 15th September 1980 and the Humason Family commenced renovation efforts.

The theatre reopened to much fanfare in September 1982. The restored theatre, with its 889 seats downstairs, is the largest sloped-floor auditorium in Kings County.

The theatre’s balcony, originally seating 350 but now featuring 142 plush rocking chairs, is named The Cabaret. After having seen the socializing space atop the marquee of the Majestic Theatre in San Antonio, the Humason Family created a similar – although smaller – space atop the Fox’s marquee, accessible from Cabaret level.

, in 1989 the Humason Family installed a 2-manual 10-rank Style 216 Wurlitzer pipe organ, sourced mostly from the Westlake Theatre in Los Angeles. The console (opus 433) did not come from the Westlake. The theatre’s original pipe organ, a modified 2-manual 7-rank (originally 4-rank) Wurlitzer organ (opus 860), was removed in 1955. Tom Hazleton of the American Theatre Organ Society debuted the new Hanford Fox 2/10 Wurlitzer to an audience of 800 in October 1990. 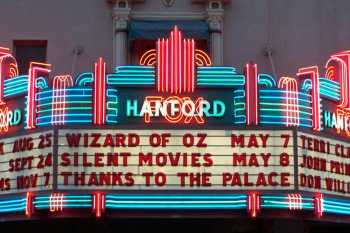 Marquee as photographed in 2004

The theatre was closed due to a ceiling collapse on 20th March 2014, which blanketed the auditorium with plaster dust and debris. The opportunity was taken for upgrade works to take place. The new ceiling is about seven inches lower than the old ceiling (necessitated by thicker roofing trusses) and features over 1,200 individually programmable multi-color LEDs embedded in the ceiling. A 10-by-10-foot (3m by 3m) inset, just forward of the proscenium arch and called “the TV”, features 370 LEDs packed close enough to display simple messages, logos, and images.

The bell and its surrounding ornamental devices at the center-top of the proscenium were recreated in Styrofoam and slightly reduced in size as part of the ceiling replacement project. The original plaster elements were showing their age and also slightly too tall to be compatible with the lowered ceiling. The proscenium arch was repainted following completion of work on the ceiling.

As part of the ceiling replacement project the lobby was also revamped and some of its 1929 detailed restored. Following the ceiling and lobby work, the theatre reopened in Spring 2016.

As of Spring 2022, the Fox Hanford continues to be both a historic movie theatre and popular live music and events venue, serving the city of Hanford and beyond.

How do I visit the Hanford Fox Theatre?

The Hanford Fox Theatre is regularly open for movie screenings and live events. It is also bookable for private events. Be sure to check out the theatre’s website

Photos of the Hanford Fox Theatre