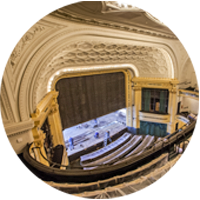 The Hudson is Broadway’s oldest surviving theatre, having opened on 19th October 1903 just weeks before the opening of the extant New Amsterdam and Lyceum theatres, which opened late October 1903 and early November 1903 respectively (although the New Victory Theatre opened – as the Theatre Republic – in September 1900 it is not a Broadway theatre). After a period of private use, the Hudson was reopened in February 2017 as the 41st theatre on Broadway in New York. 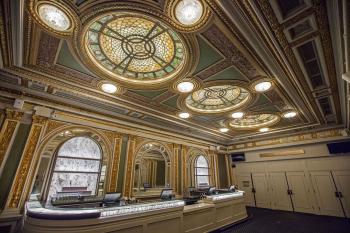 At its opening in October 1903, with a production of “Cousin Kate” starring Ethyl Barrymore, the Hudson was noted for its stunning backlit triple-dome Tiffany ceiling in the lobby, which was unusually spacious for the time at over 100ft long and 30ft wide. The entire enterprise spanned an entire city block, with patrons entering on 44th Street and the artistes entering the Stage Door on 45th Street.

The outer/ticket lobby, finished in Greco-Roman style, features a black marble box office adorned with bronze Hermae heads, and a square coffered ceiling that originally featured a bare electric lamp centered in each of the 264 coffers. In 1903 this electric lighting would have been a novelty to behold. The Tiffany Dome bar, now separated from the ticket lobby by doors, is the highlight of the theatre. 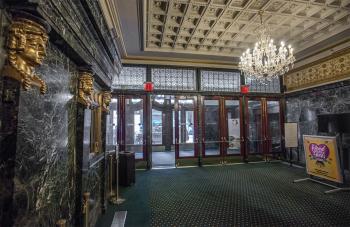 The auditorium was executed in a mixture of styles popular in the early 1900s: Beaux-Arts, Neo-Classical, and Neo-Renaissance. Decoration featured Roman-themed works, including friezes copied from Nero’s Golden House and the Baths of Titus over the proscenium and lining the walls of the lobby, respectively. Tiffany tiles feature on the proscenium and around the boxes.

The theatre’s exterior brick and limestone façade is somewhat understated but its Renaissance style and modest scale fitted-in well with its original surroundings of brownstone houses.

The hidden cove lighting around the proscenium and above the sounding board was noted as being “extremely pleasant on the eye” at the theatre’s opening in 1903; this diffuse lighting was contrasted with bare electric lamps arranged in geometric “constellations” in the auditorium’s ceiling. So admired were these features, particularly the cove lighting, that theatre designers and engineers were sent to study their design and execution. The theatre originally seated 1,100; capacity is now 975. 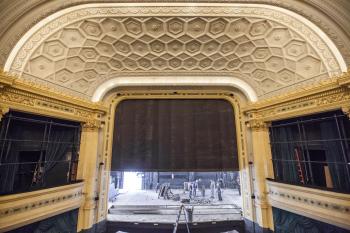 In addition to its fine architectural features, the Hudson was noted for its fire safety from the outset, boasting a water sprinkler system and 28 fire exits affording rapid evacuation of the audience if necessary.

The theatre was built and managed by producer Henry B. Harris, the youngest of a family of noted theatre operators. The architectural firm initially employed was J. B. McElfatrick & Son, but Israels & Harder ultimately completed the building – no records remain documenting why there was a change of firm. Harris perished in the sinking of RMS Titanic in 1912; thereafter his wife Renee assumed management of the theatre and, battling against all financial odds, kept the business afloat and in doing so became the first female theatrical manager and producer in the US.

Following the Great Depression, Renee lost the Hudson to foreclosure, however starting in 1934 the theatre was leased to CBS for occasional use as a radio studio between the declining theatrical engagements. In 1939 the Shuberts took over management of the theatre, before it was sold in 1944 to Lindsay & Crouse (a noted writing team, famous for the book of “Anything Goes”, “The Sound of Music”, and “Call Me Madam”). 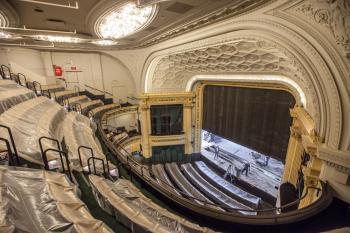 Auditorium from Balcony in 2018

, followed in 1954 by a new television show called “The Steve Allen Show”

, which broadcast from the theatre for over five years and quickly transformed into “The Tonight Show”, setting the initial standard for US late-night television.

In 1974 the Hudson became a movie theatre for adult films under the management of the Avon chain of theatres, and the theatre’s name was changed to the Avon-Hudson. Narrowly avoiding conversion to a parking lot in 1975, the Hudson was bought in 1980 by rock promoter Ron Delsner and became the Savoy rock club. 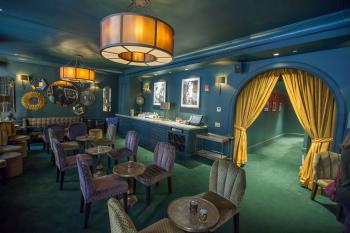 The theatre was landmarked in 1987, and in the 1990s the surrounding buildings were transformed into the Millennium Broadway hotel, with the Hudson becoming a conference and events venue for the hotel. It was also occasionally used for Comedy Central cable network television tapings.

signed a long-term lease on the Hudson in 2015 and invested in a $1.2 million refurbishment of the theatre. Since its triumphant return to Broadway in 2017 with a production of Sunday In The Park With George starring Jake Gyllenhaal, the Hudson has proved its place on the Great White Way with productions of The Parisian Woman, Head Over Heels, Sea Wall / A Life, and David Byrne’s American Utopia, in addition to various concerts and one-off events.

The Hudson is one of the few Broadway theatres which offer theatre tours – see below for details.

NOTE: The Hudson graciously allowed us to take photos while they were preparing for the launch of Head Over Heels

, however at the time photos were taken all of the auditorium seats were covered with protective dust sheets. Rest assured the Hudson is both a plush and comfortable venue!

How do I visit the Hudson Theatre?

which also includes any blackout dates. Tours last approximately 1 hour 30 minutes and include some stairs. Reservations are required and tickets can be purchased in advance from the theatre’s website

or directly from Broadway Up Close

Groups have the option of reserving a private tour on an alternate date. Private tour dates are subject to availability; call (646) 975-4619

to make your group tour reservation.

Photos of the Hudson Theatre