The Million Dollar was Sid Grauman’s first major movie theatre when it opened in February 1918. It was informally known as the million dollar theatre during construction, given rumors of its opulent interior and price tag. Grauman’s Million Dollar Theatre was failed as the first movie theatre to break with classic design conventions and use fantasy themes throughout.

The theatre was originally planned to open on Friday 25th January 1918, however The Los Angeles Record of 19th January 1918 reported that Grauman had been forced to delay the opening. The delay was blamed on the non-arrival of electrical equipment for stage settings, due to congestion of railway traffic during war-time conditions. The theatre would open one week later, on Friday 1st February 1918.

The façade features eight Muses of the Arts along with symbols of Western Americana such as bison heads, eagles, and longhorn steer skulls – all expertly sculpted by Joseph Mora. The entrance to the theatre, on Broadway, is highly decorated with deep moldings.

The theatre’s interior, designed by William Lee Woollett, presents a fantasy theme and celebrates the allegorical children’s story The King of the Golden River

by John Ruskin, a Victorian classic which would have been as familiar to theatre patrons 100 years ago as Alice in Wonderland is to modern day audiences. Interior decoration included bison heads on the balcony front facing the stage (sadly all now gone) plus other characters from the story. The centerpiece above the proscenium, featuring a fantasy winged female towering over proceedings in the theatre, has been said to represent the story’s character Esquire, the Southwest Wind; alternatively an interpretation of the King of the Golden River himself; and also as being a tribute to Melpomene, the Muse of Tragedy – but at the risk of sounding sad it was “Tragedy Triumphant”! 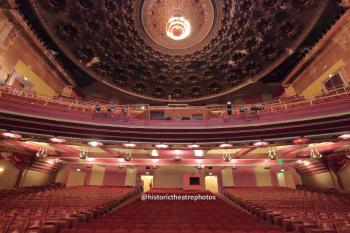 The Million Dollar featured the world’s first cantilevered balcony supported by a cast concrete arch, a technique borrowed from bridge building. The builders of the theatre made it clear they would not accept a theatre with pillars or posts under the balcony because of obstructing views, however the lead time for traditional steel trusses to support the balcony was over one year. The year-long wait was unacceptable, so the only option left was the new idea of using arched concrete trusses and casting them in place.

The new concept was described in the September 1919 issue of Popular Mechanics: “a concrete arch, such as is used in bridge construction, supports the balcony of a theater. There are no posts in the theater because of the arch, for which concrete was used when it was found impossible to obtain steel. The weight of the span is 9,000,000 lbs. It is 12ft (3.7m) wide and 110ft (33.6m) long, and contains 180 steel rods”. The concrete arch across the theatre supported six perpendicular concrete trusses, which in turn supported the balcony.

Potential patrons were not convinced that a seemingly unsupported theatre balcony could possibly be safe; ultimately Grauman had bring in the newspapers and publish photographs of the balcony successfully supporting 1,750,000 lbs of sandbags to convince the hoi polloi that it was safe.

Sid Grauman wanted to know how many patrons were in his theatre at all times, so he had a “Hansen seating device” installed. Each seat had a sensor connected to the system’s control panel that showed which seats were occupied and which were free. Ushers were also able to view a local display which allowed them to direct patrons to available seating. 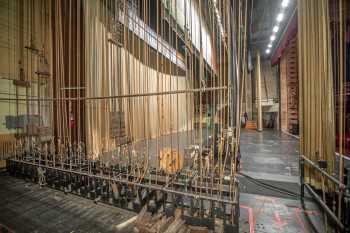 In the balcony lobby area the theatre features a set-piece barbershop. It is the last known piece of the late 1950s Mexican waxwork museum which was located in the Globe Theatre to complement the Spanish language films being shown there at the time. The barber’s chair and its settings are fabricated just like a movie set.

Despite being specifically designed as a movie theatre, full stage facilities were included when the Million Dollar was built. This allowed Sid Grauman to stage spectacular prologues prior to each movie screening, a precursor to lavish productions staged at his later theatres such as the Chinese and Egyptian theatres in Hollywood.

The theatre was originally a hemp house with flying scenery operated from the Fly Floor at Stage Right. A single purchase wire-guide counterweight system was installed at a later date, however hemp headblocks are still in place on the grid as is a pin rail, below the headblocks, on the Fly Floor.

A 2-manual, 7-rank Wurlitzer organ (opus 155) was originally installed in the theatre, its installation presided over by Jesse Crawford – noted organist – who travelled to Los Angeles from San Francisco to oversee installation of the $25,000 instrument. It was reported in the 22nd January 1918 edition of the Los Angeles Daily Times that Crawford had given an impromptu organ concert the night before (Monday 21st), declaring the organ ready for use. Charlie Chaplin had “appeared in a new role before a small audience” at the theatre the day prior to that, and reportedly played the organ for three hours.

The original organ was superseded in September 1918 by a larger 2-manual, 16-rank, Style 35 Wurlitzer (opus 186). Although the organs are now gone (the original transferred to the Rialto Theatre on South Broadway - now an Urban Outfitters store), huge plaster organ grilles in the style of Spanish Colonial altar screens, now painted to look like wood but originally painted in much brighter colors, still flank the proscenium arch. 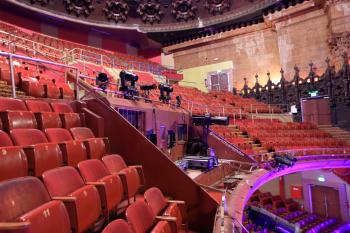 Projection Booth, in the front center of the balcony

A novel feature of the theatre was its projection booth located at the center front of the balcony. Sid Grauman stated that the shorter throw distance [than projecting from the rear of a theatre balcony], combined with simpler optics [because of straight-on, as opposed to angled, project], resulted in a picture much brighter than in other movie theatres. Despite the fact that different lenses could be used to cast the same amount of light upon a movie screen from differing distances, Grauman was never one to miss a sales pitch, and continued to sell his Million Dollar Theatre partially on the claim that its picture was far brighter than other movie theatres.

Prime center balcony seats to accommodate the projection booth were a loss of premium income and the balcony center projection location was not a pattern seen in later theatres. Very few theatres were built with a projection booth at front-of-balcony level, however some examples are the Roxy Theatre in New York (opened 1927, demolished 1960), the State Theatre in Philadelphia (demolished in the late 1960s), the extant Ellen Eccles Theatre (opened as the Capitol Theatre in 1923) in Logan, Utah, and the extant O2 Academy Brixton (opened as the Brixton Astoria in 1929), and the Cine Teatro Alameda in San Luis Potosi, Mexico.

Grauman sold the Million Dollar in late 1923 to focus his attention on Hollywood and the Egyptian and Chinese theatres. Paramount, the new owner of the Million Dollar, operated the theatre until 1930 when they closed it due to the Great Depression.

In 1945 Metropolitan Theatres took over, and by 1950 instituted a policy that it exclusively entertain Spanish-speaking audiences. In 1946 Metropolitan modernized the theatre with a brand new marquee (the current incarnation) and a radically refreshed lobby: the grand double-height murals on the lobby walls, introductory scenes from The King of the Golden River, were covered-up, and a drop ceiling halved the height of the lobby, hiding the vaulted ceiling above. As of 2019 the murals still exist behind the false lobby walls. 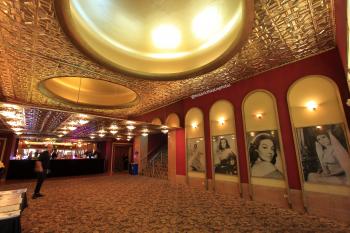 Metropolitan closed the theatre in 1993 and a church took on the lease for five years. Thereafter the church moved to the State Theatre on Broadway in 1998, however damage during their occupation of the Million Dollar allegedly included painting over murals and other interior decorations.

After being shuttered in 1998, the theatre was later leased by former nightclub owner Robert Voskanian in 2005 and re-opened in 2008 for special events, concerts, and movie screenings. Business was intermittent and Voskanian relinquished his lease in 2012.

From 2012 to 2017 the theatre was used for occasional one-off events, screenings, and location shoots. As of late 2017 the theatre, the Edison Building, and the adjoining Grand Central Market were sold to Beverly Hills investor Adam Daneshgar’s company Langdon Street Capital.

Slightly prior to Daneshgar’s purchase, the theatre had advertised a new tenant called CoBird who described themselves as “a global media company with an immersive social commerce & entertainment platform for millennials”. CoBird signed a five-year lease and stated they planned to use the theatre space as an entertainment venue, however only two public events took place during their tenancy which was brought an end in June 2019.

helped facilitate the nomination, and in early July 2019 the Los Angeles City Council voted unanimously in favor of granting the theatre Historic-Cultural Monument status. As of July 2019 the owners are seeking new tenants.

How do I visit the Million Dollar Theatre?

As of March 2017 The Million Dollar Theatre does not offer its own tours however the Los Angeles Conservancy’s Last Remaining Seats program sometimes uses the theatre as a venue for screening classic films in the summer months. Pre-screening Backstage tours are often available but very limited in numbers and fill-up quickly. Check out the Last Remaining Seats website

also schedule events at the theatre.

Photos of the Million Dollar Theatre