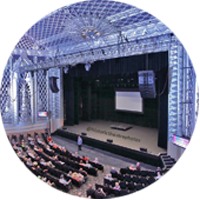 The Saban opened as the Fox Wilshire Theater in September 1930, and is one of Los Angeles’ most notable Art Deco buildings. Theatre architect S. Charles Lee designed the Saban to be fully capable as a theatre for vaudeville in addition to its main focus as a major film presentation house. 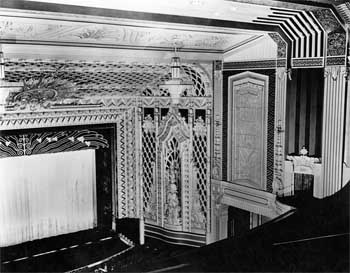 The Fox Wilshire, as photographed at its opening in 1930

Originally seating 2,295, the theatre now has capacity for 1,900 with the rear Orchestra section having been turned into an extended lobby, bar, and circulation space. The original house curtain opened with vertical panels rising from the center out to the sides, and with its Art Deco curlicue design must have been quite a sight to see.

The balcony has a movable curtain which can reduces the balcony-level capacity by roughly half for smaller shows, although its use precludes any form of projection or followspots being used from the projection booth. 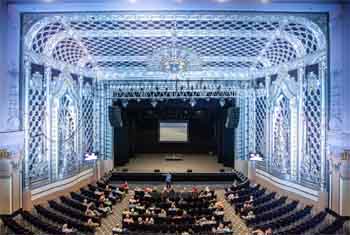 Proscenium, as photographed in 2019

Despite two renovations and various modernizations, the theatre retains much of its original appearance in terms of design, but not in terms of colors – apart from the magnificent proscenium.

The theatre’s original color scheme was silver, black, and coral. At the time of opening the proscenium’s complex open plasterwork doubled as the openings to the theatre’s organ chambers and was finished in silver, with colored electric lamps behind which could create multi-colored light effects spilling into the auditorium. The lobby and Front-of-House areas were finished in high contrast decoration in silver and black.

For many years the theatre operated as one of 20th Century Fox’s premiere theatres. The theatre’s wide proscenium (stage opening) allowed for an extra large screen, which, coupled with re-equipping for 70mm movie projection in 1959, made it a natural home for long runs of widescreen films such as Exodus, Goodbye Mr Chips, Fiddler On The Roof, Man Of La Mancha, and The Sound of Music which ran for 93 weeks at the theatre! 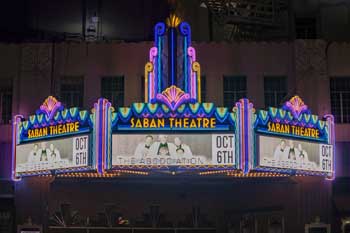 Marquee at night, upgraded to a digital display

Fox closed the theatre in 1977, then in 1981 it was taken over by the Nederlander Organization and renovated for stage use.

Temple Of The Arts has owned and operated the theatre since 2005, and in 2009 it was renamed the Saban following a $5 million grant from Haim and Cheryl Saban. In addition to popular music events, the theatre hosts religious groups Churchome

and the Agape International Spiritual Center

Many television recordings have taken place at the Saban including Last Comic Standing, Eddie Murphy: One Night Only, Extraordinary: Stan Lee, and movies such as Night Of The Running Man.

How do I visit the Saban Theatre?

Photos of the Saban Theatre