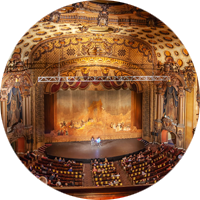 Widely acknowledged as Los Angeles’ most lavish theatre, construction of this 2,000-seat movie palace took only six months and was completed in 1931. Owing to the Great Depression it was the last opulent movie palace to be built in Los Angeles. The stunning French Baroque interior heralds a particularly grand entrance lobby, modeled on the Palace of Versailles’ Hall of Mirrors in France. 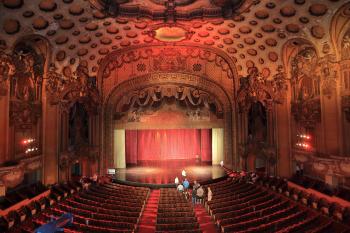 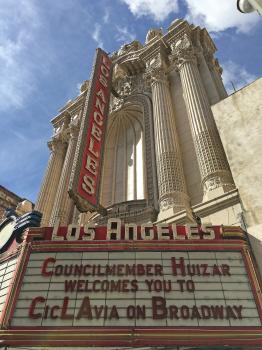 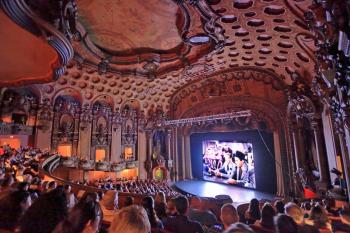 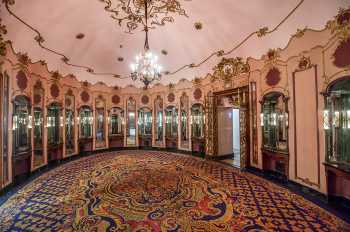 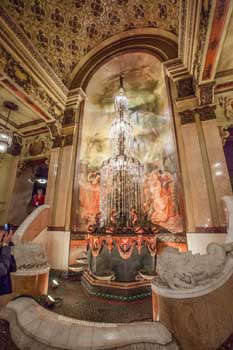 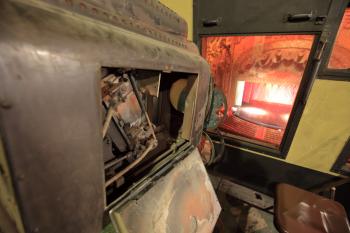 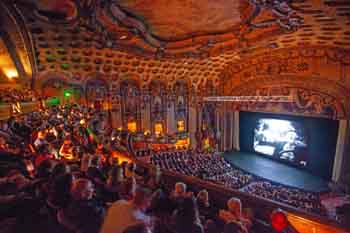 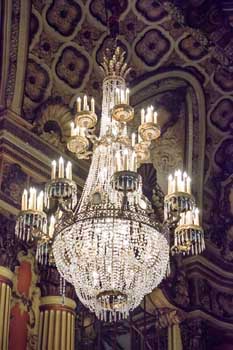 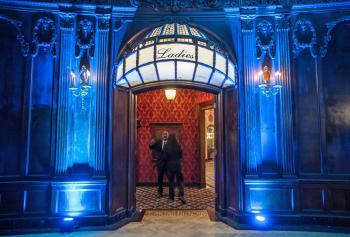 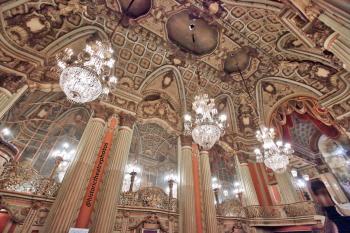 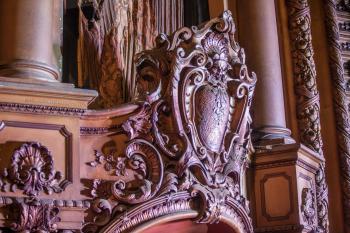 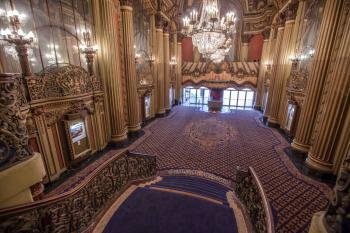 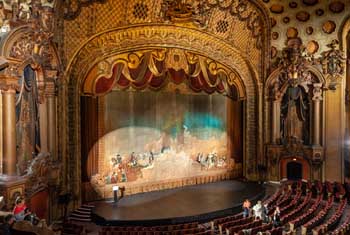 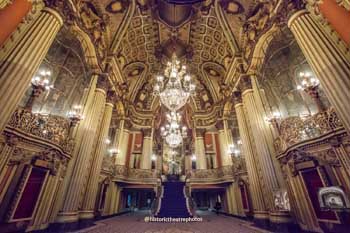 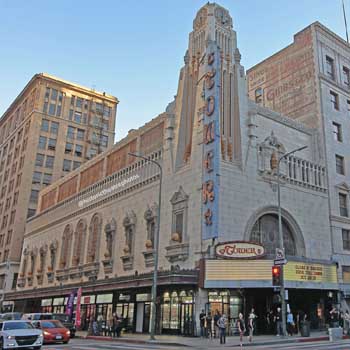 The Tower Theatre in Los Angeles, designed for H.L. Gumbiner in 1927 by S. Charles Lee

The theatre was commissioned by independent exhibitor Herman L. Gumbiner and designed by architect S. Charles Lee, who had previously designed the Tower Theatre for Gumbiner in 1927, where he replaced a 650-seat theatre (the Garrick Theatre) with a much larger 906-seat theatre which included retail space at street level – a feat other architects thought impossible but which clearly impressed Gumbiner.

Lee had previously worked at Chicago architecture firm Rapp & Rapp, who were responsible for designing the Chicago, Oriental, and Palace theatres in Chicago, along with countless other movie palaces concentrated in the US Midwest.

The architect Samuel T. Norton, related to the Gumbiner family, was an associate architect on the Los Angeles Theatre project.

The design of the theatre is similar to the Fox Theatre in San Francisco, built in 1926. Gumbiner had asked Lee to setup a tour of great movie palaces and the first stop was the San Francisco Fox. Upon seeing the Fox, Gumbiner called-off the rest of the tour having found the template he wanted to use for his new theatre.

With an overall budget of over $1.5 million, the new theatre was the most expensive built in Los Angeles at the time on a per-seat basis. As an independent exhibitor, Gumbiner believed he could challenge the big studios if his theatres were so enticing to the public that the studios would feel obliged to give him their pictures just to meet public demand. The Los Angeles Theatre therefore contained many innovations and features designed to impress audiences and differentiate it from all others. 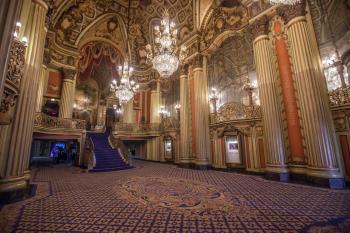 The sumptuous and spacious entrance lobby, 54ft (16.5m) in height

The theatre’s Front-of-House areas were designed to accommodate up to 2,000 guests waiting for the next screening. A ballroom and lounge, restaurant and refreshment room, children’s playroom, water fountain made of crystal and marble, palatial restrooms, and a soda fountain, were among the opulent features. The 54ft (16.5m) high Grand Lobby was a welcome departure from the cramped lobbies of other theatres. 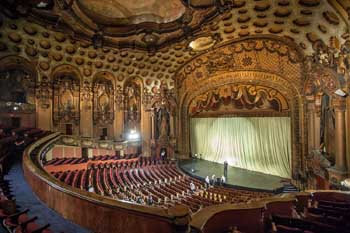 The theatre also featured the latest technology. A large panel of indicators in the Grand Lobby told the Head Usher where seats were available in the auditorium, allowing patrons to be efficiently directed to empty seats.

Blue neon lighting lined the aisles at floor level to guide patrons who needed to leave or enter the auditorium after the show had started. Originally there were no more than six seats between aisles to minimize disruption should someone need to leave their seat during a performance.

For movie projections, a novel optical arrangement using a prism and mirrors sent a duplicate image of the movie being projected on the big screen down to the lounge in the basement to allow staff and latecomers to follow the action. The “periscope” system was designed by Francis G. Pease, longtime assistant to Nobel Prize winner and noted physicist Dr Albert A. Michelson. Microphones in the auditorium conveyed sound to the lounge and other areas where it was desired.

Soundproof “crying rooms” were located at the rear of the mezzanine for mothers with infants, and were equipped with their own dedicated speakers or choice of headphones, air conditioning, restroom, and of course a cigarette lighter.

Construction was completed in the short timeframe of just six months by pouring concrete and plaster casts offsite (plaster molds were used multiple times for repeating patterns) and simply piecing together the elements onsite.

The original seating capacity was 1,949 and the current capacity is 1,937. Capacity reached over 2,000 in the 1940s when some aisles in the orchestra were removed and replaced with seats, and the orchestra pit was covered-over with seating right up to the front of the stage. 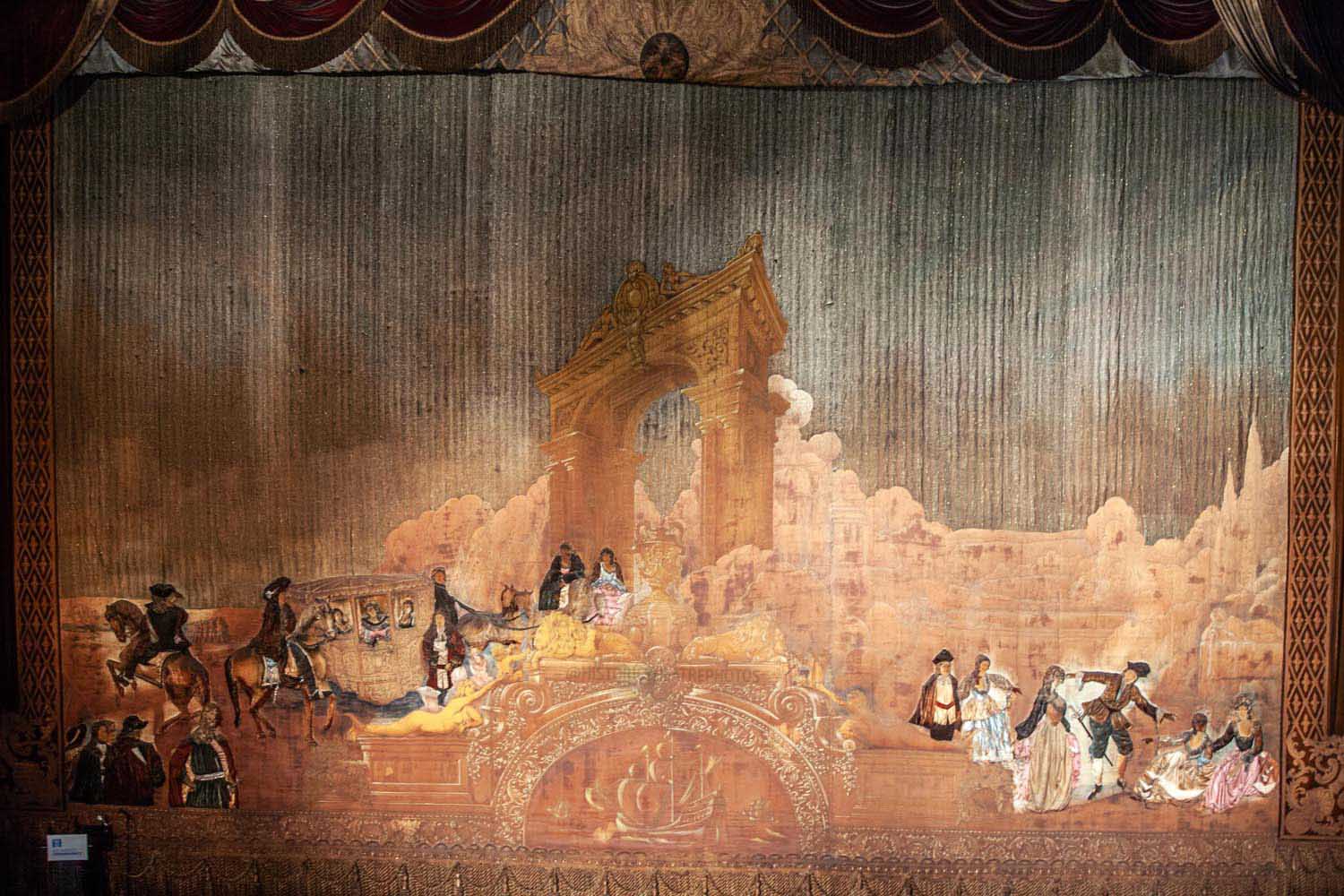 The elaborate Act Drop was said to be one of the most expensive commissioned in its time and depicts Louis XIV, his wife, his mistress, all surrounded by the French Army and Navy. The curtain is constructed in silk with a three-dimensional effect called “trapunto” or “stuffed technique”, such that the figures and animals actually stand out from the curtain by a few inches to give them depth. The main figures on the act drop have real wigs, the hair gently billowing as the curtain moves up or down. The act drop is shown in closeup in our YouTube tour of the theatre

. The elaborate and expensive curtain, in addition to all other draperies installed at the theatre’s opening, were supplied by the Seattle-based B.F. Shearer Company.

The original valance is also still in place and features elaborate swags and drapes in red and blue velvet and gold satin, with the seal of the City of Los Angeles (as it was in 1931) featured in the center – although now very faded. 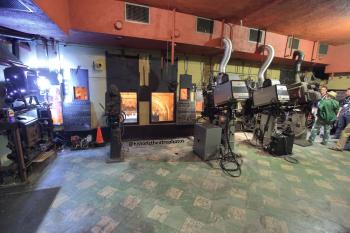 The theatre’s projection booth houses two modern xenon projectors however much of the original equipment is also still in situ. A third projector retains its carbon arc lamphouse, and additionally a carbon arc followspot and a working Brenkert F7 Master Brenograph survive to this day.

, courtesy of Tom Ruff and Ed Baney from the Broadway Theatre Group.

Although designed primarily as a movie theatre, the Los Angeles Theatre had a full stage, orchestra pit, and dressing rooms so that elaborate live prologues could be presented before movie screenings, or entire stage performances.

The theatre was originally equipped with a 2-manual, 10-rank Wurlitzer organ (Style 216, Opus 1620) which was relocated from the Tower Theatre. The organ was reported as having mysteriously disappeared in June 1978 and no-one knows what happened to it. It seems likely it was sold off in parts and kept secret from the theatre’s management.

“The Console”, a periodical for organ enthusiasts, noted in January 1979 that: “Recent developments in the mystery surround[ing] the disappearance of the Style 216, 2m/10r Wurlitzer from the Los Angeles Theatre disclose that the missing organ is still of concern to both Metropolitan circuit officials and the holder of the master lease on the structure. This month requests were made by the theatre chain for the opus number of the Wurlitzer for insurance purposes and to inform the Los Angeles Police Department to help identify it. No leads have turned up to give an indication [of] what happened to [the] organ”. 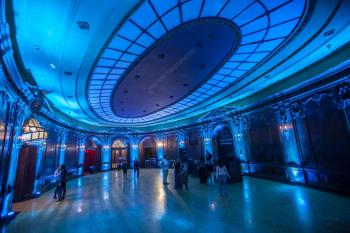 Due to the Great Depression, Gumbiner was forced into bankruptcy just three months after the theatre opened. The theatre operated under a receivership arrangement for the remainder of 1931 until it closed in December of that year.

William Fox later reopened the theatre, having gained control of it through the bankruptcy courts and his ownership of the underlying land. Fox operated the theatre as a second-run movie theatre until 1939 when it was leased to Metropolitan Theatres, who started showing first-run MGM movies in 1944.

In the late 1940s, with the breakup of the studio system, management of the theatre moved to Fox West Coast, who operated the Los Angeles until 1962.

Metropolitan Theatres took over the theatre in the early 1960s and were the only major operator to remain in downtown Los Angeles at the time. Many formats were tried at the theatre over the years, including first-run action movies, Mexican, English with Spanish subtitles, and adult movies. The Los Angeles Theatre finally closed in 1994. 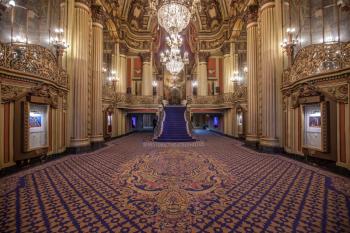 Since 1987 the theatre has been owned by the Broadway Theatre Group, who also own the Palace, State and Tower theatres, all located on Broadway in Downtown Los Angeles.

How do I visit the Los Angeles Theatre?

As of March 2017 The Los Angeles Theatre does not offer its own tours however the Los Angeles Conservancy’s Last Remaining Seats program generally uses the theatre as a venue for screening classic films at least once a year in the month of June. Pre-screening Backstage tours are often available but very limited in numbers and fill-up quickly. Check out the Last Remaining Seats website

Photos of the Los Angeles Theatre