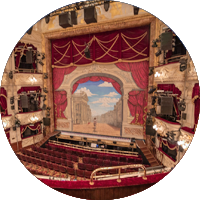 Reopened after fire and redesign by Frank Matcham: 31st December 1901