<< Go Back up to Region ‘United Kingdom: London’

The current theatre building dates from 1812, however it is the fourth theatre building to have occupied the site, making this the oldest theatre site in London still in use today. The Drury Lane stage is the largest of any West End theatre and it has hosted many multi-year engagements, including a record-breaking 10-year run of “Miss Saigon”. The theatre is currently owned by noted composer Sir Andrew Lloyd-Webber’s LW Theatres group. 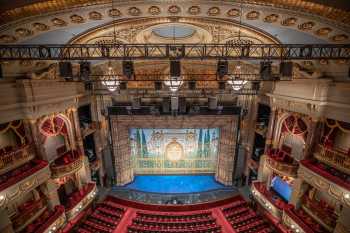 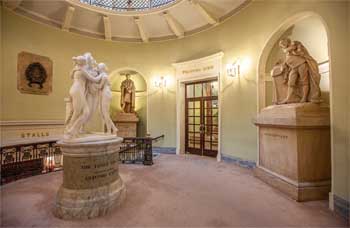 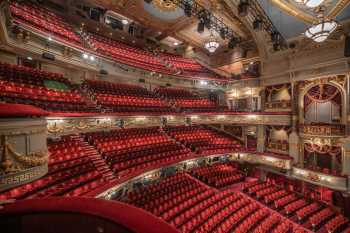 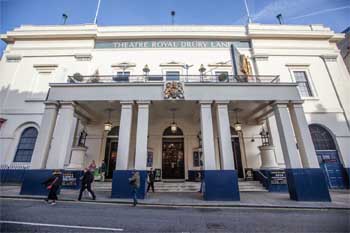 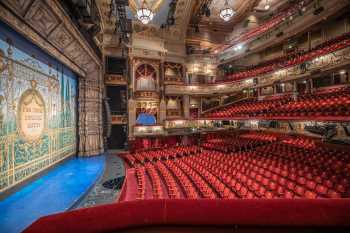 The Theatre Royal Drury Lane is one of the most important theatres in the world, with the site having been in theatrical use since 1663. The right to present dramatic entertainments dates from the Royal Patent granted by King Charles II to Thomas Killigrew in 1662, which is still in the possession of the theatre.

To this day the theatre’s name confuses those unfamiliar with it as its entrance is on Catherine Street...whereas Drury Lane is to the rear of the theatre.

First theatre: Theatre Royal in Bridges Street (1663-1672)
Present-day Catherine Street was originally called Bridges or Brydges Street. The new Theatre Royal opened on 7th May 1663 and was accessed from Brydges street, so became known by the name of the street accessing the theatre’s main entrance. It was built by dramatist Thomas Killigrew under Royal Charter from Charles II, and was alternatively known as the King’s Playhouse. The Great Plague of London forced the theatre to close, by order of the Crown, on 5th June 1665. It reopened roughly 18 months later featuring a widened stage, however burned to the ground in a fire on 25th January 1672. 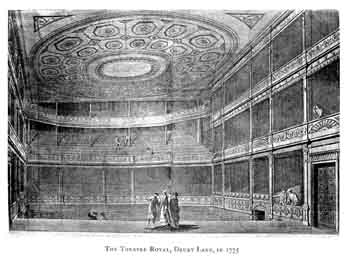 Theatre Royal in 1775
Second theatre: Theatre Royal in Drury Lane (1674-1791)
A new theatre was built which opened on 26th March 1674 and is believed to have been designed by architect Sir Christopher Wren. The Theatre Royal, Bristol / Bristol Old Vic (completed 1766) was modeled on the 1674 theatre and designed by David Garrick’s master carpenter at Drury Lane, James Saunders, so affords a good indication of what the 1674 Drury Lane interior looked like. The architect Robert Adam later remodeled the external façade and auditorium in 1775. From 1747 to 1776 the theatre was managed by David Garrick. By 1791 the theatre was in dire need of updating and it was decided the only option was demolition. 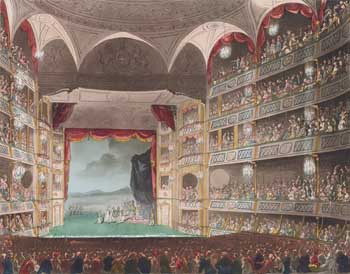 Theatre Royal in 1808
Henry Holland, with some assistance by John Linnell, designed the latest theatre for manager Richard B. Sheridan, and it was the largest theatre to have stood on the Drury Lane site catering for up to 3,611 patrons. It opened on 21st April 1794 with a production of Shakespeare’s “Macbeth”. Except for churches, it was the tallest building in London. The auditorium featured a semicircular arrangement of four tiers of boxes, including proscenium boxes at the sides of the 45ft wide forestage. The proscenium boxes were supported by pilasters featuring candelabra and circular mirrors 5ft in diameter, the mirrors said to produce a pleasing reflected view of the audience. There were two galleries above the uppermost box level. The stage itself was large at 83ft wide by 92ft deep. Fire prevention features included an iron safety curtain and tanks of water on the roof, however the theatre burned-down on 24th February 1809. Owner Richard B. Sheridan allegedly watched the flames from the street while sipping a glass of wine and said “Surely a man may be allowed to take a glass of wine by his own fireside”. 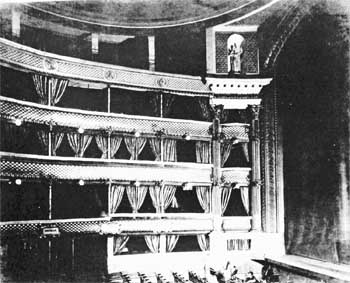 The current building, designed by Benjamin Dean Wyatt, opened on 10th October 1812. In 1820 the portico that still stands at the theatre’s front entrance on Catherine Street was added, and in 1831 the colonnade running down the Russell Street side of the building was added.

The entrance lobby opens into a central rotunda that is open to the higher levels with a gallery one level above. On either side of the rotunda are symmetrical grand staircases leading to the Royal Circle and Grand Saloon, the latter of which is located above the main lobby.

On 25th March 1908 a fire destroyed the stage and backstage areas. The fire was initially attributed to an electrical fault, however it was subsequently asserted that the building’s electrics were switched-off at 6pm the previous day and the fire alarm sounded at 3:20am the next morning. The auditorium and Front of House areas were saved by the lowering of the fire curtain and a fast response from fire crews. Most of the electrical system was renewed following the fire, and a new counterweight flying system was installed. 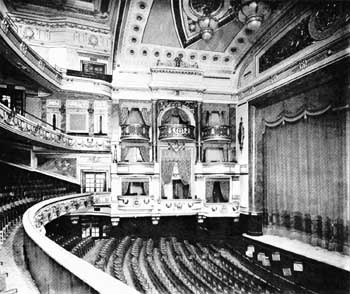 In 1922 a major interior renovation was undertaken at a cost of £150,000, resulting in the current auditorium arrangement of four levels of Stalls, Royal Circle, Grand Circle, and Gallery, accommodating just over 2,000 patrons. Interior decoration was by specialist ornamental plasterwork company Clark and Fenn, in what has become one of their most notable interiors.

The theatre was dark during the World War II when it was used as the home base for the Entertainments National Service Association. On 15th October 1940 the theatre took a direct hit from a gas bomb which tore through floors to the Stalls (main floor) level of the auditorium, however did not explode. The theatre reopened post-war on 19th December 1946.

Since 2005 Sir Andrew Lloyd-Webber’s Really Useful Theatre Group, now LW Theatres, has owned the theatre. On 7th May 2013, Lloyd-Webber revealed a £4 million restoration of the theatre to mark its 350th anniversary. The detailed restoration returned the public areas of the Rotunda, Royal Staircases, and Grand Saloon, all of which were part of the 1810 theatre, to their original Regency style. 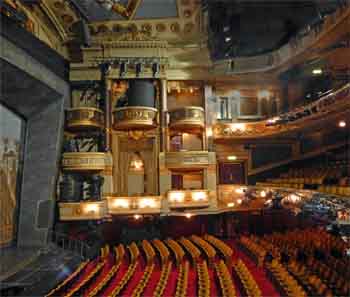 In late 2017 Westminster Council granted permission for an extensive renovation of the theatre which commenced in January 2019 and was expected to last 18-20 months. Access to the auditorium was to be greatly improved with increased toilet facilities and disabled access introduced. The stagehouse would be upgraded with a new grid and flying system. The raked (sloped) stage would be leveled to accommodate large-scale modern productions, and the theatre’s historic substage machinery would be removed after being documented. While it is sad that the historic machinery was removed, theatres are not museums and must adapt to accommodate the needs of modern theatrical productions. As the largest stage in London’s West End, Drury Lane had to adapt to accommodate the biggest and best productions for generations to come.

A large prop – yet practical – bell is hung backstage in the fly floor area high above the stage, most likely left over from the 1972 production “Gone With The Wind”. Tradition has it that the bell is rung with the applause at the end of the final performance of a show’s run at the theatre. The bell was last rung on 5th January 2019 at the closing performance of “42nd Street”. The bell remained within the building during LW Theatres’ renovation and the tradition will be continued to ring it during the curtain call of final performances at the theatre.

It was announced in March 2019 that Disney’s Frozen

would reopen the theatre. Previews commenced 27th August 2021 (delayed from Autumn 2020 and then Spring 2021 due to the Covid-19 pandemic) with the official opening on 8th September 2021. 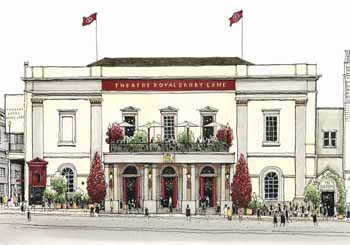 After a closure of approximately 30 months, the building reopened on 23rd July 2021 following its £60 million restoration, with free public access to The Garden, the Cecil Beaton Cocktail Bar, and the Rotunda Champagne Bar located in the base of the theatre’s magnificent rotunda.

With landscaping designed by Cameron Landscapes, The Garden

is named after high-society photographer and renowned costume designer Cecil Beaton. The elegant bar and lounge is open until late and does not require reservations. The Grand Saloon

Performance numbers were provided by the theatre; some online reports have conflicting numbers however their source is not known.

How do I visit the Theatre Royal, Drury Lane?

Guided Tours are given in English and last approximately 1 hour. There are 20 spaces available per tour. Tours meet in the main foyer/lobby. Theatre Royal Drury Lane is a working theatre, so no two tours are the same. Sometimes the route will need to change due to other events taking place in the building. This is a walking tour with numerous steps and backstage areas so comfortable shoes are recommended.

, which also includes additional information about the tour.