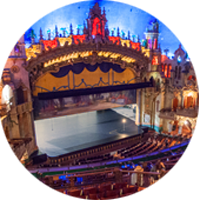 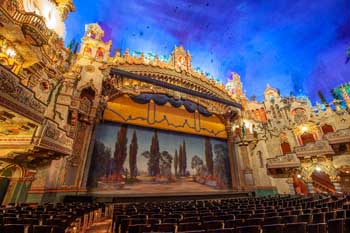 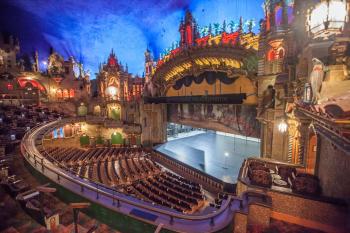 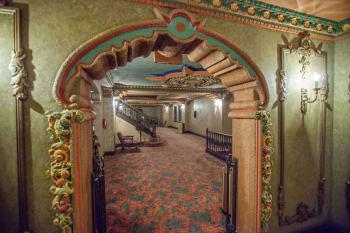 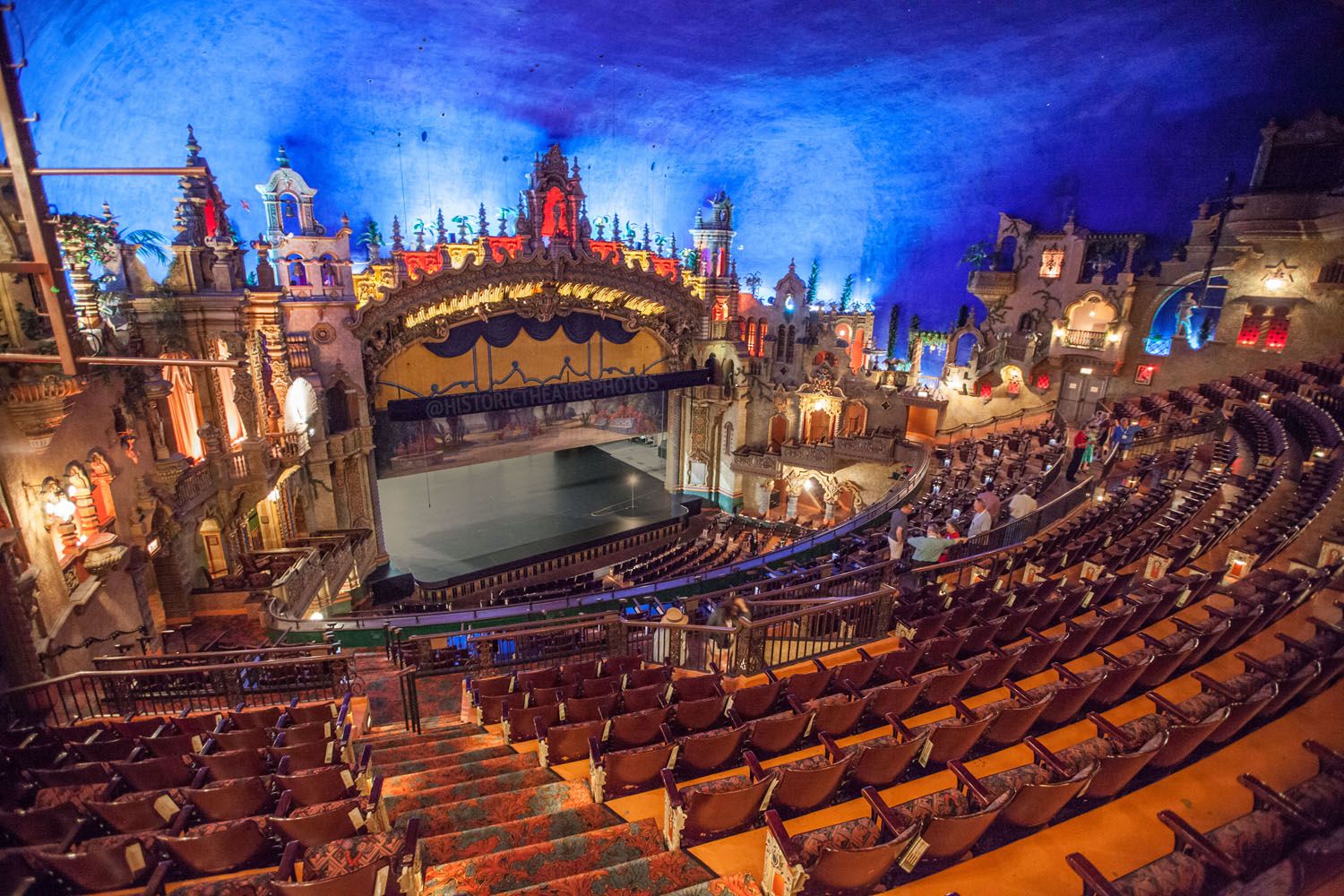 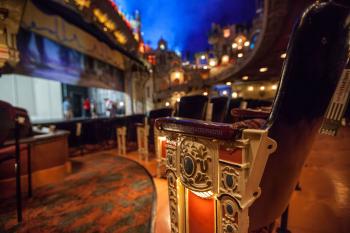 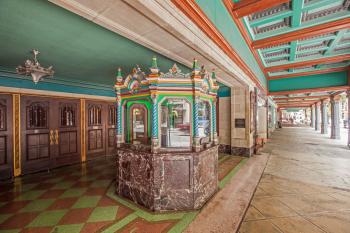 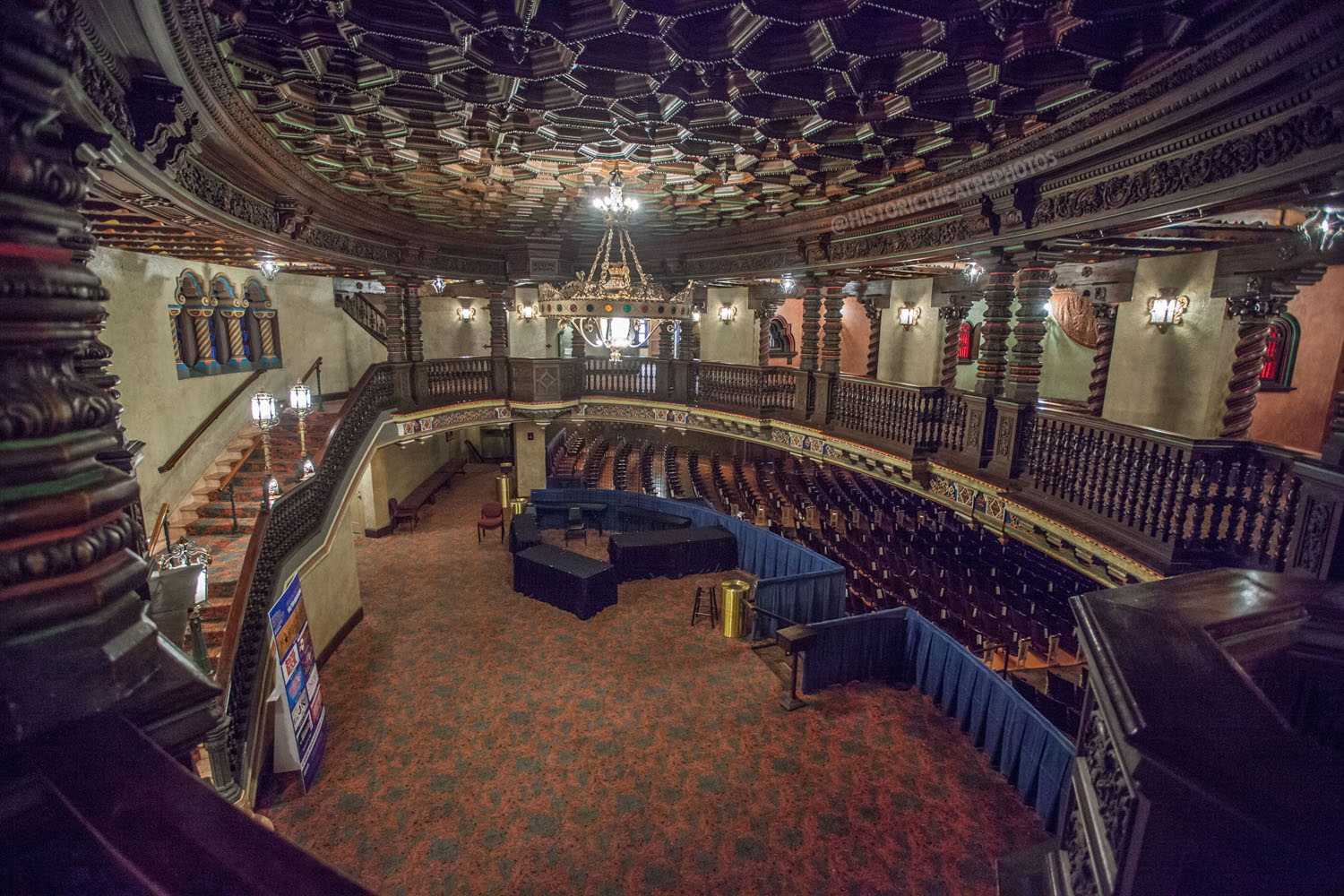 It was usual for an atmospheric theatre’s ceiling to be painted to resemble the sky, tiny lamps recreating celestial constellations with faithful accuracy, and clouds projected over the vista to enhance the spectacle. John Eberson was the architect most associated with the style, and 16 of his atmospheric theatres are still in operation throughout the US, the San Antonio Majestic being one of them. The Majestic is considered one of his best examples. 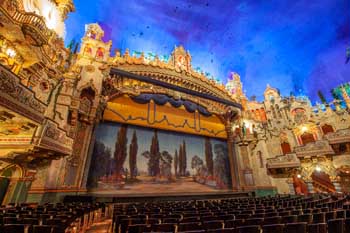 The theatre’s design was inspired by Spanish Mission, Baroque, and Mediterranean styles, hailed as “Mexican Cloister” architecture at its opening, and was modeled on a Spanish village. It features replicas of well-known Greek, Roman, and Renaissance sculptures hidden amongst greenery, in addition to real cypress trees that were imported from Spain. Additional foliage included ten South American palms, as well as Orange, Azalea, Magnolia, and Oleander trees. One of the more unusual features is 28 stuffed birds, perched on balconies throughout the auditorium and some even preserved in-flight, hung on wires. The most notable of these is a rare white peacock located on the House Left side. Having shown its age, the white peacock was replaced in 2007 at a cost of $3,600.

The auditorium’s ceiling faithfully recreates several star constellations, positioned according to consultations with experts from the National Geographic Society in the late 1920s. 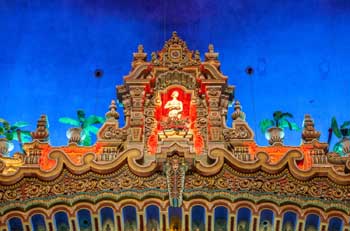 Statue of Venus above the Proscenium Arch

Above the proscenium is a statue of the goddess Venus, looking across the auditorium. On either side of the proscenium are singers’ balconies, originally accessed by stairways from the Stage.

A 3-manual 10-rank Robert Morton organ was installed in the theatre and featured in Robert Morton advertisements during the second half of 1929.

At its opening the Majestic was the first theatre in Texas to be fully air-conditioned, the largest theatre in Texas, and the second largest theatre in the United States, boasting 3,703 seats across Orchestra and two balconies (seating was claimed at over 4,000 at the time of opening). The largest theatre was the Fox Theatre in Atlanta, GA, with 4,665 seats. A 1929 report on the San Antonio Majestic proclaims: “The upper balcony is reserved for the colored patronage and is reached by separate stairways and elevator through a separate lobby entrance”. Segregation was commonplace in 1920s Texas.

The marquee was designed to house an outdoor café on a balcony above, although it is unclear if this ever came to fruition. The lobby housed a unique feature: a “giant wall aquarium, illuminated from behind and above”. Exotic fish were on view, and the surface water line was hidden hence affording the effect of a submarine view.

A penthouse apartment was designed into the top of the 18-story building, the “Majestic Building”, containing the theatre. This was for Karl Hoblitzelle, head of the Interstate chain, and included a rooftop garden.

At the time of opening the theatre’s vertical sign was said to be the largest theatrical sign in the South, measuring 76ft high and 14ft wide at the top, and 8ft wide at the base. It contained 2,400 lamps and boasted a brilliance of 114,700 candlepower. The “Majestic” sign atop the theatre’s roof featured 1,280 lamps.

Despite many years of entertaining the crowds the Majestic closed in 1974. In 1981 it was reopened but a superficial remodeling covered-up many of the important architectural details. It was closed again in 1988 and the City of San Antonio stepped-in to purchase the theatre. The nonprofit Las Casas Foundation was formed with the priority of restoring the Majestic as close as possible to its original 1929 design. $4.5M was raised for the restorations and in the Fall of 1989 the Majestic reopened with “Majestic Week” featuring concerts from the San Antonio Symphony and a Gala performance featuring Rosemary Clooney and Johnny Mathis. Banjoist Don Galvan, who had taken part at the theatre’s 1929 opening, returned to San Antonio for the reopening celebrations.

The Majestic became home to the San Antonio Symphony until 2014 and their move to the new Tobin Center. In 1993 the theatre was designated a National Historic Landmark. 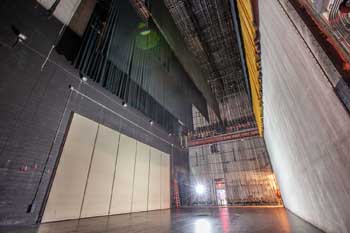 The Majestic had been unable to accommodate large stage productions due its limited stage depth. In 1995 a $3.5M dollar expansion was undertaken which saw the Majestic’s stage expand by reducing the depth of the Empire Theatre’s stage, with whom the Majestic shares a rear stage wall. In addition sound-isolation barriers/doors, modernized theatrical rigging, a state-of-the-art orchestra shell, expanded dressing room facilities, and enlarged storage space was added. The Majestic’s current seating capacity is 2,311.

The Majestic is now the home of Broadway Across America

in San Antonio. Musical sensations such as Miss Saigon, Les Miserables, Cats, Cabaret, and Ragtime have graced the Majestic stage, as well as such international classic artists as Itzhak Pearlman and Isaac Stern. Contemporary artists such as Lyle Lovett, B.B. King, Tony Bennett and Sting have performed in the theatre. Comedians Jerry Seinfeld, George Lopez and Chris Rock have also had their names in lights on the Majestic’s marquee.

How do I visit the Majestic Theatre?

As of mid-2019 tours generally run once per month, on a Monday at 5pm and 6pm. Check out the Majestic Theatre website

for more information and booking. As tours are subject to production constraints the date is different each month. Tickets are $25 and the tour lasts 60 minutes. The tour will involve the use of stairs; for accommodation requests call (210) 226-5700.