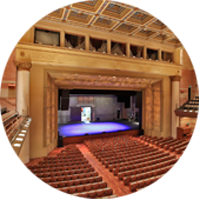 Royce Hall is one of the four original buildings on UCLA’s campus in Westwood, and its twin-towered façade has come to represent the defining image of UCLA. Designed by local architectural firm Allison and Allison, it was completed in 1929 as the main hall, grand classroom, and principal meeting place for the university. It is now a performing arts venue with capacity of over 1,800. 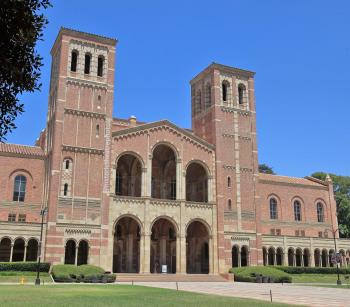 The building’s architectural style of Lombardic Romanesque resulted from architect David Allison’s love of the form, its well-suited nature to brick (the desired building material), and its link to the founding of historic Italian universities such as Bologna and Padua.

The building had to be beautifully inspiring yet practical, and this was achieved by having an inner building as the auditorium, complemented by an outer building housing smaller lecture halls, classrooms, and offices. The colors of brick used across the building vary in a random pattern and span the 19 colors of brick available at the time of construction in 1929. Renovated areas use the same color palette but appear brighter and more obvious than their 1929 counterparts due to their shorter time being exposed to the effects of weathering. 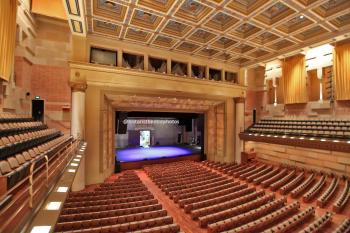 Royce Hall was designed with speech acoustics in mind, not for music, however successive remodeling has resulted in a regionally important concert hall and performing arts facility.

Adjustable wall openings at Orchestra level allow for variable acoustic responses and, when used in conjunction with the ceiling coves, adjustable curtains and adjustable hard/soft paneling and galleries in the Balcony walls and ceiling, can increase the hall’s reverberation time by over 1 second.

The building sustained heavy damage in the 1994 Northridge earthquake which left one of the signature towers completely cracked horizontally and on the verge of collapse, necessitating immediate emergency strengthening work. Further inspections of the building resulted in a closure of four years to accommodate a $70.5 million seismic retrofit and renovation. It was a complex operation as the building’s eligibility for National Register listing attracted scrutiny from both State and Federal levels, plus UCLA wanted to introduce some additional, non-original, facilities into the renovation such as a rehearsal hall (mirroring the size of the stage) and improved acoustics within the auditorium. 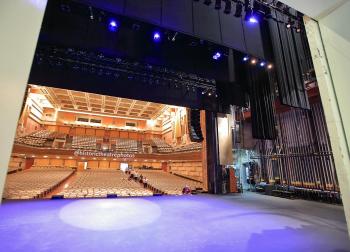 Royce Hall is a favorite of the film and television industry due to its location and ability to emulate many US East Coast universities. It has been featured in TV shows House MD, Gilmore Girls, Buffy the Vampire Slayer, Quincy ME, The Bob Hope Show, and movies The Nutty Professor 1 & 2, Legally Blonde 1 & 2, Angels and Demons, Erin Brockovich, and Hancock.

How do I visit Royce Hall?