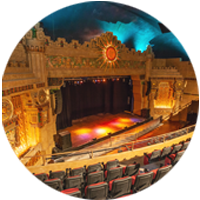 Former Names: Aztec on the River

The Aztec Theatre opened in June 1926 as a Mesoamerican-themed atmospheric movie theatre, generally considered the most elaborate example of its kind throughout the entire United States. Despite triplexing in the 1970s and an extended period of closure in the 1990s/2000s, the theatre has been restored to its 1920s glory and is currently an active live entertainment venue. 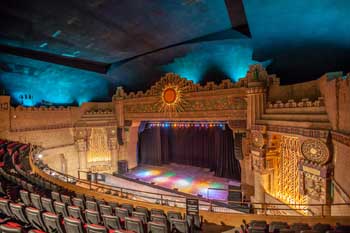 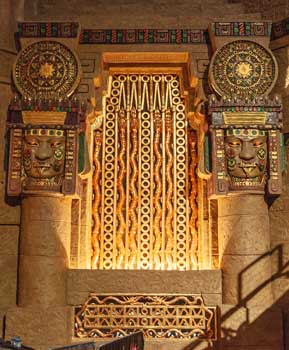 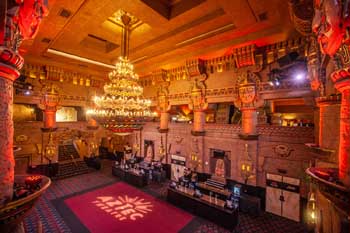 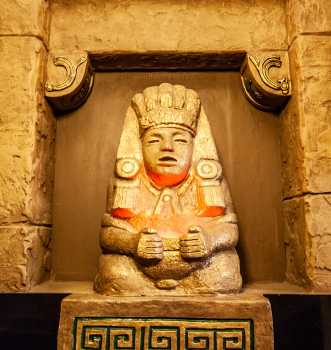 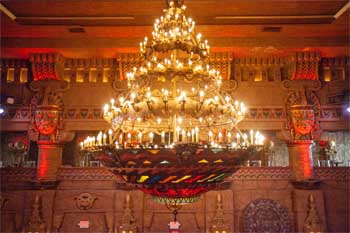 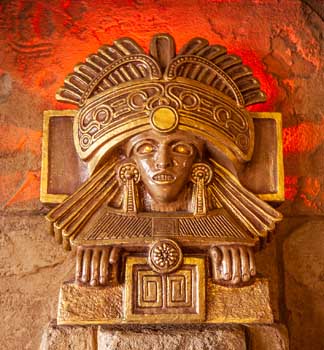 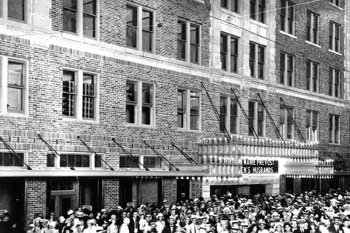 Crowds gather for the opening night on 4th June 1926

In 1925 a group of prominent San Antonio businessmen formed the Commerce Realty Company with the intention of building a movie palace for the city. The Kelwood Company offered its principal architect for the project, Robert B. Kelly, who architected the theatre in collaboration with interior designer Robert O. Koenig for a cost of $1.75 million.

Built within a six-story office building, the theatre’s exotic theme was to be Mesoamerican, incorporating features interpreted from the Aztec, Mayan, Mixtec, Toltec, and Zapotec cultures. Kelly and Koenig spent several months in Mexico researching archaeological sites and visiting museums – particularly in Mexico City – creating models and sketches as part of their studies.

Included within the design of the theatre building was a basement level café. The Old South Café was a hit from the outset in the mid-1920s and served Southern-style home cooking for around 20 years. It was accessible only by a single stairway adjacent to the theatre’s main entrance, and patrons waiting to be seated could often be seen backing-up on the stairs. It would later become a Mexican restaurant.

The Aztec’s auditorium was designed in an “atmospheric” style. Architect John Eberson is most closely associated with the style, in which the auditorium chamber is designed to evoke the sense of a particular time and place, most commonly an outdoor setting with a soaring blue sky above, often featuring twinkling stars and projected moving clouds. The extant Majestic Theatre in San Antonio is a particularly good example of an Eberson atmospheric auditorium. 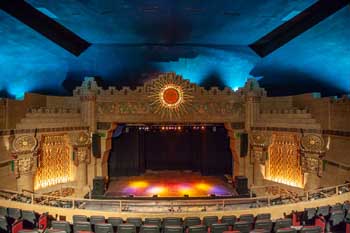 The Aztec’s ceiling has been altered over the years (it is raised and flattened in the center; done to accommodate a now-absent movie screen which used to hang over the orchestra seating area in advance of the balcony and could be retracted up to the ceiling) however the original ceiling curved up gently from the sidewalls with no visible joins or lines and was painted to look like the sky. It featured approximately 100 twinkling stars, and had moving cloud lighting effects projected onto it from four projectors, probably hidden behind the sidewalls. Hidden cove lighting created a mood appropriate to the show or season, such as cool blue during the hot summers or a warming red glow in winter.

Unlike most atmospheric theatres, the main architectural elements of the Aztec’s auditorium are symmetrical. Monumental Doric columns support the proscenium, flanked on their inner edges by gigantic cut stones gradually stepping inward as they rise from stage floor to the proscenium above. To the sides of the proscenium are paired columns with the appearance of cut stone, flanking ornate organ grilles composed of writhing golden serpents (the sacred serpent Quetzalcoatl) amongst intricate wave and circle patterns – Mesoamerican symbols for water and sand. The columns are capped by giant sculptures of Coyolxauhqui, the Aztec Moon goddess. These sculptures have burning red eyes and Aztec sun stones sitting atop their heads. Above the organ grilles the stepped-back “roofs” allude to Mayan or Aztec stepped pyramids. 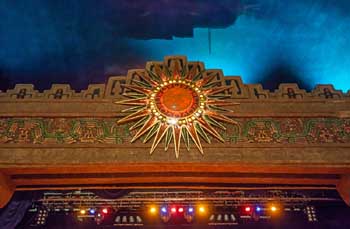 Above the proscenium is a large horizontal low-relief carving, replicating panels found in the Temple of the Plumed Serpent at Xochicalco and featuring the sacred serpent Quetzalcoatl. The entire proscenium panel is surmounted by twenty colossal stepped blocks, each with its own individual illustration, representing the 20 Day Signs of the Aztec and Mixtec calendars. The proscenium centerpiece is a complex monumental sun motif located centrally above the stage, capable of being lit from within in a mix of colors (originally noted as 20 colors, linking to the Aztec/Mixtec Day Signs and/or their vigesimal (base-20) numbering system). Tradition had it that the sun device was always lit in gold at the end of a performance.

The overall auditorium design was intended to create the illusion of sitting within an open courtyard in a Mesoamerican temple complex.

The theatre houses a fire curtain with an elaborate painted design by Herbert Bernard and executed by Volland Scenic Studios of St. Louis. The scene depicts the meeting of conquistador Hernando Cortez and Aztec ruler Montezuma in 1519 at the outskirts of the Aztec capital of Tenochtitlan. The fire curtain was last photographed in the late 2000s but is understood to still be in place as of 2019.

The impressive four-story colonnaded lobby features a massive one-and-a-half ton chandelier, two stories tall and 12ft wide, hailed as the largest chandelier in Texas when it was added to the theatre in 1929. It was commissioned because theatre management decided they needed to step up their game and elevate the theatre’s level of grandeur in light of the Majestic Theatre opening just a couple of blocks away. The chandelier was constructed out of steel and glass from scratch in just 35 days. Directly underneath the chandelier sat a circular sacrificial altar stone featuring detailed carving (see photo below), however it was removed from the theatre after being sold in the 1960s.

Surrounding the lobby at orchestra level there are 16 wall lamps, supported on slender columns rising from the floor which are modeled on ceremonial staffs and feature Mayan detailing. The wall lamps have heraldic emblems and send a gold light outwards and upwards throughout the lobby.

The lobby also features heavily detailed murals on the balcony stair landings, modeled after Lintel 39 from the Mayan ruins at Yaxchilan (north side) and the Mayan Temple of the Sun at Palenque (south side). The upper corners of the stairway portals in the lobby feature serpent head brackets, placed there to pay homage to the ancient Aztec practice of stationing such figures at the base of ceremonial stairways, the most familiar example being Kukulkán, the feathered Mayan snake god, at the base of the steps of the Pyramid of Kukulkán at Chichen Itza.

At mezzanine level, 16 gigantic round columns frame open galleries overlooking the orchestra-level lobby below. The columns have a cut stone appearance and were reportedly inspired by the Hall of Columns at the Mixtec ruins of Mitla in south Oaxaca. Capping the columns are brightly colored heads of Coyolxauhqui, the Aztec moon goddess, complete with burning red-lit eyes. The three coffers in the lobby ceiling were originally painted with blue sky and clouds to evoke the feeling of being in a temple.

The theatre’s entrance was originally open to the street however it is now enclosed with wall-to-wall glass doors. Inside the vestibule (ticket lobby) the floor features brightly colored tiling with the centerpiece being the ticket booth, styled to suggest a stepped Mesoamerican pyramid. The ticket booth originally featured black wrought iron bars for security, shaped and painted to look like arrows.

Opening night at the Aztec was 4th June 1926 and featured a 26-piece orchestra with Aztec chorus girls. A crowd of 6,000 tried to get one of the theatre’s 2,500 seats; ultimately 3,000 patrons were admitted. 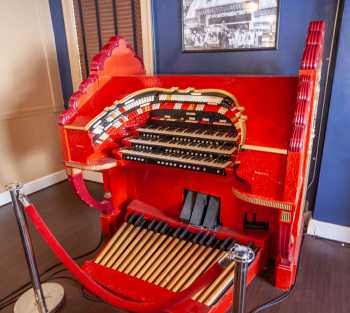 The theatre’s Wurlitzer organ console, on display in the VIP Warrior Room Lounge

The theatre was originally furnished with a 3-manual, 11-rank Robert Morton organ (Opus 18586). The organ was restored by Ed Gaida in 1958. As of 2019, organ pipes are still in place in the original organ chambers, and a disconnected Wurlitzer console (installed into the auditorium’s balcony in 2006) is on display in the VIP Warrior Room Lounge at the House Right side of the auditorium. For more details of organ changes, skip to the details of the 2006 renovation, below.

In 1932 a sulfur (stench) bomb was exploded in the theatre, burning six people – two seriously. The explosion was the fourth stench bombing to occur at a theatre in San Antonio since 1930, the result of a nation-wide phenomenon created by the woes of the Great Depression which saw theatre operators fight back against theatre management for fair pay and staffing.

The theatre was listed in the Film Daily Yearbook of 1943 as having a seating capacity of 2,451 and being operated by Paramount Pictures through their subsidiary Hoblitzelle & O’Donnell.

The Aztec was popular for many years, however in response to the growth of television, and in common with most single-screen theatres of the time, the Aztec was triplexed in the 1970s. It was advertised as the Aztec Triplex and the digit “3” was added to the theatre’s vertical sign, below the word AZTEC. 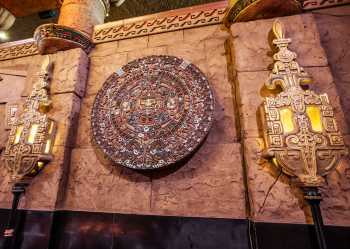 In 1988 the San Antonio Conservation Society

purchased the theatre, saving it from potential demolition for parking or conversion into a hotel, and continued movie operations for another year, however the theatre eventually went dark in 1989.

In 1992 the theatre was listed on the National Register of Historic Places as the only surviving example of a Mayan Revival style theatre in Texas, as well as one of the few and best remaining examples of the style in the nation. In August 1993, the San Antonio Conservation Society sought to sell the Aztec Building with preservation covenants, requiring buyers to return the theatre to its 1920s glory. Several potential uses were circulated, including being a new home for the San Antonio Symphony, conversion to a dinner theatre or a Spanish-language TV studio, however none of the proposals progressed.

In 1998, Baron Theodore Bracht, from Belgium, purchased the building with the intent of turning it into a family restaurant and entertainment complex. In Spring 2000 a $20 million restoration project commenced, including some new construction tunneling under the roadway (Crockett St) between the theatre building and the San Antonio River Walk, thereby affording direct access to the theatre from the ever-popular River Walk. The space initially included “a museumlike exhibit” showcasing the 1920s-era mechanical equipment used to run the theatre, however as of 2019 the underground space is occupied by retail and there is no longer public access up into the theatre.

The restoration project was completed in 2006 and the theatre reopened on Saturday 1st April 2006 as Aztec on the River, featuring: 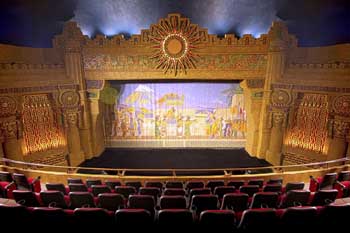 Sadly Aztec on the River closed mid-December 2007 after struggling to find its identity and attract an audience, the latter in part due to the films it screened which appeared dated when compared to the up-to-date titles and 3D features being screened at the IMAX theatre in Rivercenter, just half a mile away.

In early 2008 Drury Hotels negotiated a lease on the theatre with the intention to reopen it as a concert venue, showcasing San Antonio Rose Live – a two-hour Branson, Missouri style entertainment cabaret featuring traditional Country, Western swing, and Gospel music, headlined by Country singer Darrell McCall. A $4 million conversion was undertaken and the show opened on 21st September 2009. After a two-and-a-half year run the show closed in February 2012 due to “current and future economic circumstances”. 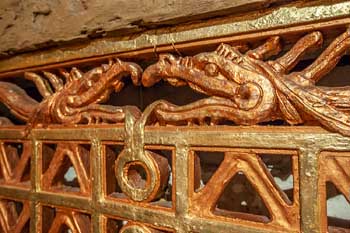 In 2013 Samuel Panchevre’s PHH Ventures LLC signed a multi-year lease to operate the theatre. With a $2 million redevelopment the Aztec was reimagined as a live entertainment venue, increasing capacity from 1,700 to 2,000. The orchestra seats were removed, replaced by terraced flooring that could accommodate chairs, cocktails tables, or standing room only – with a central bar serving the area and a “mosh pit” dancefloor area immediately in advance of the stage. The theatre reopened in February 2014, with a soft opening on Valentine’s Day.

In early 2015 the building was sold to Samuel Panchevre, and less than half a year later a 51% stake was sold to Live Nation.

The Aztec is currently programmed and managed by House of Blues Entertainment, a division of Live Nation whose portfolio includes The Wiltern in Los Angeles, The Tabernacle in Atlanta and other live music venues across the US that fly the House of Blues flag.

How do I visit the Aztec Theatre?

Photos of the Aztec Theatre