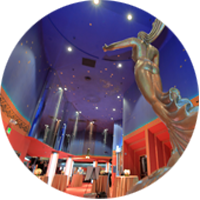 The Earl Carroll Theatre opened in late 1938 as an “entertainment palace” dinner theatre, or supper club, located in Hollywood on Sunset Boulevard. Earl Carroll, a Broadway impresario nicknamed “the Troubadour of the Nude”, had already operated a similarly themed theatre in New York from 1922 to 1932, and both theatres sported the phrase “Through these portals pass the most beautiful girls in the world” over their respective entrances. 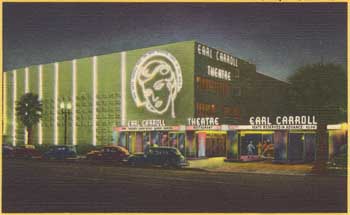 The theatre’s Streamline Moderne design, by Gordon B. Kaufmann (also known for the Los Angeles Times building, the Santa Anita Racetrack and the Hoover Dam), was notable for its extensive use of neon lighting and innovative stage machinery. The building’s main façade was dominated by a 24ft high neon portrait of Beryl Wallace, Carroll’s long-term partner, and was a well-known Hollywood landmark for many years. Neon signs reading “EARL CARROLL THEATRE” also adorned the building’s façades, and were animated by flashing “EAT” – “AT” – “THE” – “THEATRE”, all within the word “THEATRE”, before ending the cycle by lighting-up the entire theatre name.

Arrival at the theatre was facilitated by a three bay porte-cochère which allowed motorcars to drop off their passengers in style. Entering the theatre patrons would ascend a stairway crowned by the “Goddess of Light” sculpture, the space opening-out into an open plan lobby/bar and auditorium, the former lit by red and white neon pillars and the latter lit with ribbons of stalactite neon hanging from the ceiling and adorning the curves of the auditorium. In the early 1950s the lobby was walled-off from the auditorium, however the sight of entering the theatre to those early patrons must have been nothing short of stunning. 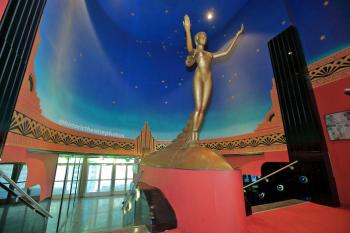 Goddess of Neon on the Lobby Stairs

Advertisements proclaimed the theatre featured “sixty of the most beautiful girls in the world”. These girls would perform elaborate stage revues usually led by a popular star, and shows would change roughly every six months.

The Philco Radio Show broadcast from the theatre during the 1940s and it was during this time that the Earl Carroll “Wall of Fame” was created on the theatre’s main façade, featuring celebrity autographs inscribed in cement blocks.

The theatre was built with a basic wooden truss roof so no vertical flying was possible, although hanging points were readily available for drapery and the occasional swing-seat for dramatic descending entrances. Significant stage machinery was employed at floor level, the main feature being a 70ft diameter revolving stage containing independent inner circle and outer ring sections. Located at the house left edge of the proscenium arch was a three-level tower/drum revolve, and downstage nearest the audience was a “girl lift” [sic] – essentially a trapdoor with screwjack riser. The theatre also originally contained a rain machine or water curtain.

Following the untimely deaths of Earl Carroll and Beryl Williams in a 1948 airplane crash, the theatre was sold and continued to operate but within a few years fell on hard times. Las Vegas showman Frank Sennes took over in 1953 and revived the theatre as the Moulin Rouge, which included TV appearances on the show “Queen for a Day” well into the 1960s.

In late 1965 the theatre became the Hullabaloo, a rock and roll club welcoming minors and capitalizing on the popularity of the television variety show “Hullaballoo”. In 1968 it was renamed the Kaleidoscope and featured top west coast rock acts with an emphasis on local bands such as The Doors. 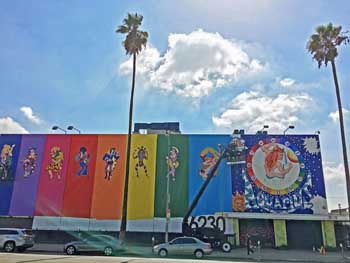 Façade in 2018, repainted as the Aquarius Theatre for Quentin Tarantino’s “Once Upon a Time... in Hollywood

Late 1968 saw major changes to the theatre when it was renovated in a psychedelic art style and renamed the Aquarius Theatre to house the Los Angeles production of “Hair”, which ran for an unprecedented two years. The main façade had its Wall of Fame and neon signage removed, repainted with a rainbow-hued psychedelic mural. In late 2018 the façade was restored to this state for filming of the Quentin Tarantino movie “Once Upon a Time... in Hollywood” (2019)

. During the run of “Hair” the theatre was often used for rock concerts on Mondays when the theatre would otherwise be dark; some of The Doors most iconic recordings are from this time at the Earl Carroll Theatre.

Center Theatre Group was using the Aquarius Theatre by the late 1970s, and in late 1978 the theatre housed an extended run of “Zoot Suit” prior to its Broadway run.

Broadway producer Martin Tahse bought the Aquarius from Center Theatre Group in 1982 with plans to renovate and reopen the theatre, however by 1983 the theatre came under the management of Sunset Gower Studios who converted it into a television theatre for the TV talent show “Star Search”. It was also used for multiple charity telethon telecasts, and for a short time as the home of Fox Network’s “The Chevy Chase Show” (axed after five weeks). 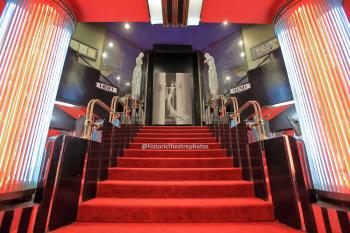 Imperial Staircase in the Lobby

In the late 1990s Nickelodeon leased the building from Sunset Gower Studios and the site became the headquarters for their west coast operation under the moniker Nickelodeon on Sunset. The theatre was used for both tapings and live broadcasts for shows including The Amanda Show, Drake & Josh, iCarly, Victorious, and the 10-season run of All That.

In 2004 the site was sold to a private equity firm, and in late 2016 Nickelodeon vacated the property by moving to new headquarters in Burbank. The theatre was designated a Historic-Cultural Monument in December 2016. In October 2017 Essex Property Trust announced groundbreaking of their 7-level mixed-use “Essex Hollywood” development which will include historic preservation and restoration of the Earl Carroll Theatre. Essex is planning to restore the façade’s Beryl Wallace portrait and vertical neon strips.

In September 2019 it was announced that Thaddeus Smith, the entrepreneur behind the highly successful Music Box Theatre @ Fonda, and his business partner, real estate investor and billboard entrepreneur Brian Levian, signed a lease to take over and revitalize the theatre into an exciting new 38,000 sq. ft. entertainment complex.

How do I visit the Earl Carroll Theatre?

The Earl Carroll Theatre is currently under development and is closed to the public.

Photos of the Earl Carroll Theatre