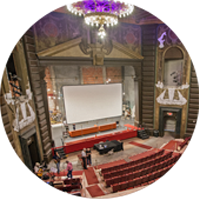 The Fox Fullerton opened in May 1925 as a vaudeville and silent movie house, quickly establishing itself as the destination movie theatre of Orange County. The Italian Renaissance-inspired interior originally featured murals by Anthony Heinsbergen’s decorating company. 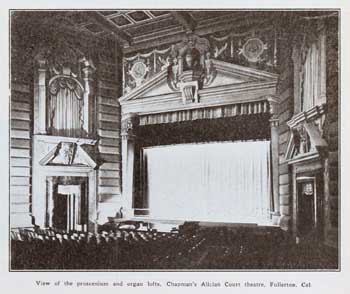 Constructed by local businessman C. Stanley Chapman, son of Fullerton’s first mayor Charles Chapman, the theatre was originally called Chapman’s Alician Court Theatre for Chapman’s wife Alice Ellen. The theatre featured a lobby in the form of an exterior courtyard, taking advantage of the outdoor open space and its visibility from the street. These features helped create a buzz of excitement as passers-by saw crowds gathering for a performance or screening.

The theatre was part of a larger mixed-use building complex, the two-story Mary Louise Tea Rooms (owned by Charles Chapman’s sister, Dolla E. Harris) to the north, and a one-story retail wing to the south, originally occupied by Laura’s Flower Shoppe. In 1927 the Mission Inn replaced the Tea Rooms, and at a later date the building housed an Italian restaurant. 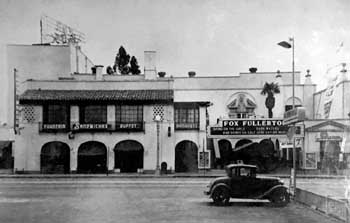 The architect of the Fox Fullerton was Raymond M. Kennedy of Meyer & Holler, the firm who were also responsible for Grauman’s Chinese and Egyptian theatres in Hollywood, which also feature the “courtyard lobby” concept. The Pasadena Playhouse and the Alex Theatre (both completed 1925), and the Geffen Playhouse (completed 1929 as a masonic lodge), also boast courtyard lobbies.

The Fox’s courtyard, originally featuring a large fan-palm near its center, was originally fully open to the street, however historic photographs show that by 1930 a simple two-line readerboard and marquee was in place above the entrance. The 1950s saw a much larger triangular neon marquee added, designed to catch the eye of motorists passing the theatre in their automobiles. The large neon marquee was removed in 2011; features such as the iconic “Fox” lettering were saved for preservation and future use.

The Fox Fullerton’s interior decoration featured six large murals depicting the history and development of California and painted by artist C.F. Brunkhorst working for A.T. Heinsbergen & Company. Noted muralist Anthony Heinsbergen’s company was a leading theatrical decorating firm of the time, responsible for creating murals – still in existence – at The Wiltern, Los Angeles City Hall, and the Biltmore Hotel. Hidden multi-colored lighting in the ceiling originally played a mix of color schemes onto the six murals. Artist John Beckman, employed by Meyer & Holler, painted the elaborate artwork in the Fox’s two lobbies. Beckman would go on to design the extensive Art Deco murals in the Avalon Theatre on Catalina Island and contribute to much of the interior decoration of Grauman’s Chinese Theatre in Hollywood.

The Fox, originally seating 1,095 across two levels, initially boasted a “mammoth” Marr and Colton organ, featuring an echo organ with five ranks of pipes hidden midway back in the auditorium’s ceiling. 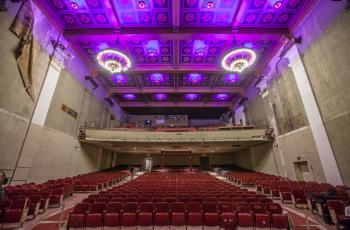 In late 1927, the theatre’s manager Harry L. Wilber employed a novel idea which caught the attention of the press: the winter uniforms for the theatre’s usherettes were of black velvet, brass buttons and belt, with the addition of a letter “M” (for “Mission Court Theatre”) cut out of aluminum and painted with the “highest grade” radium paint! The radium reportedly glowed “with a superb green” as the usherettes walked up and down the darkened aisles.

In July 1929, a Spanish Colonial Revival super service station, known as the Firestone Building and designed by Stiles O. Clements of Morgan, Walls & Clements, was added to the south side of the building. The Firestone Building continued as an automotive garage until 1978 at which point it was converted into retail. 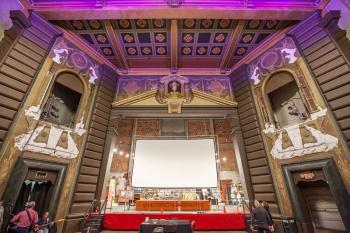 In 1955 a projection screen for CinemaScope was installed and, due to its width, was placed in front of the stage opening running wall-to-wall. Unfortunately this necessitated lopping-off the decorative plasterwork on the organ grilles, although it did ensure that the 1920s proscenium arch survived intact. The proscenium arch features tapered columns at either side with grotesque heads at their top, an architectural form known as a Term, seen in Ancient Greek architecture as a Herm, also adopted into Ancient Roman architecture, and later revived in the Renaissance.

In 1962 the National General Corporation took over the theatre and under their tenure the six Heinsbergen murals were painted-over. Mann Theatres later acquired the theatre and it finally closed in 1987 after a screening of “Angel Heart” starring Mickey Rourke, the owners not being interested in completing a seismic retrofit as required by the City of Fullerton.

In 2001 the Fullerton Historic Theatre Foundation

was formed with the intention of acquiring and restoring the theatre. By 2004 the theatre was scheduled to be demolished to make way for an apartment building, however in 2005 the Fullerton Historic Theatre Foundation acquired ownership from the City of Fullerton. The theatre was added to the National Register of Historic Places in 2006. 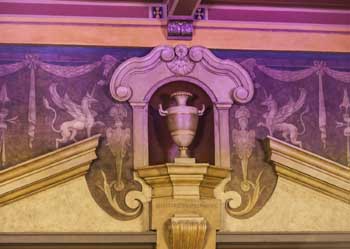 were brought in to replicate the original auditorium ceiling and elements around the proscenium arch. The theatre’s original and iconic three-sided sign, atop the stagehouse, spent some time under restoration and was returned to the top of the theatre building in 2015, its almost 900 incandescent lamps having been replaced with LED equivalents.

In April 2020 the Fullerton Historic Theatre Foundation announced meetings had commenced with architects DLR Group on the next phase of the theatre’s restoration. In December 2020 it was announced that the Phase 2 restoration project had secured $3.125 million in funding and would break ground in Spring 2021.

The Phase 2 project targets work required to obtain a Certificate Of Occupancy from the City of Fullerton, obviating the need to apply for special permits every time an event is to be held. Main features of the project include an entirely new HVAC system, new main power supply, improved ADA access, and completion of the planned bathroom areas. In addition, the lobby and lobby staircase will be restored as will more of the theatre’s murals. Work is expected to be completed in Fall 2021.

In November 2021 it was announced

that the Phase 2 restoration project was expected to break ground by the end of 2021, and that full opening was anticipated by 2025, hopefully in time for the theatre’s 100th birthday.

How do I visit the Fox Theatre?

The Fox Fullerton is currently closed, undergoing renovation, however it does feature one-off events on a case-by-case basis - check the theatre’s website for details

. The theatre also participates in the Fullerton Art Walk

Photos of the Fox Theatre