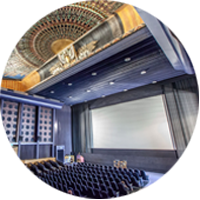 Built in the early 1920s by Sid Grauman, the Egyptian Theatre was was the site of the first Hollywood movie premiere. The theatre was designed by Meyer & Holler in a Revival-Egyptian style due to public fascination with Egyptian archaeology. This proved to be extremely fortuitous given Howard Carter’s discovery of the tomb of Tutankhamun just one month after the theatre opened. 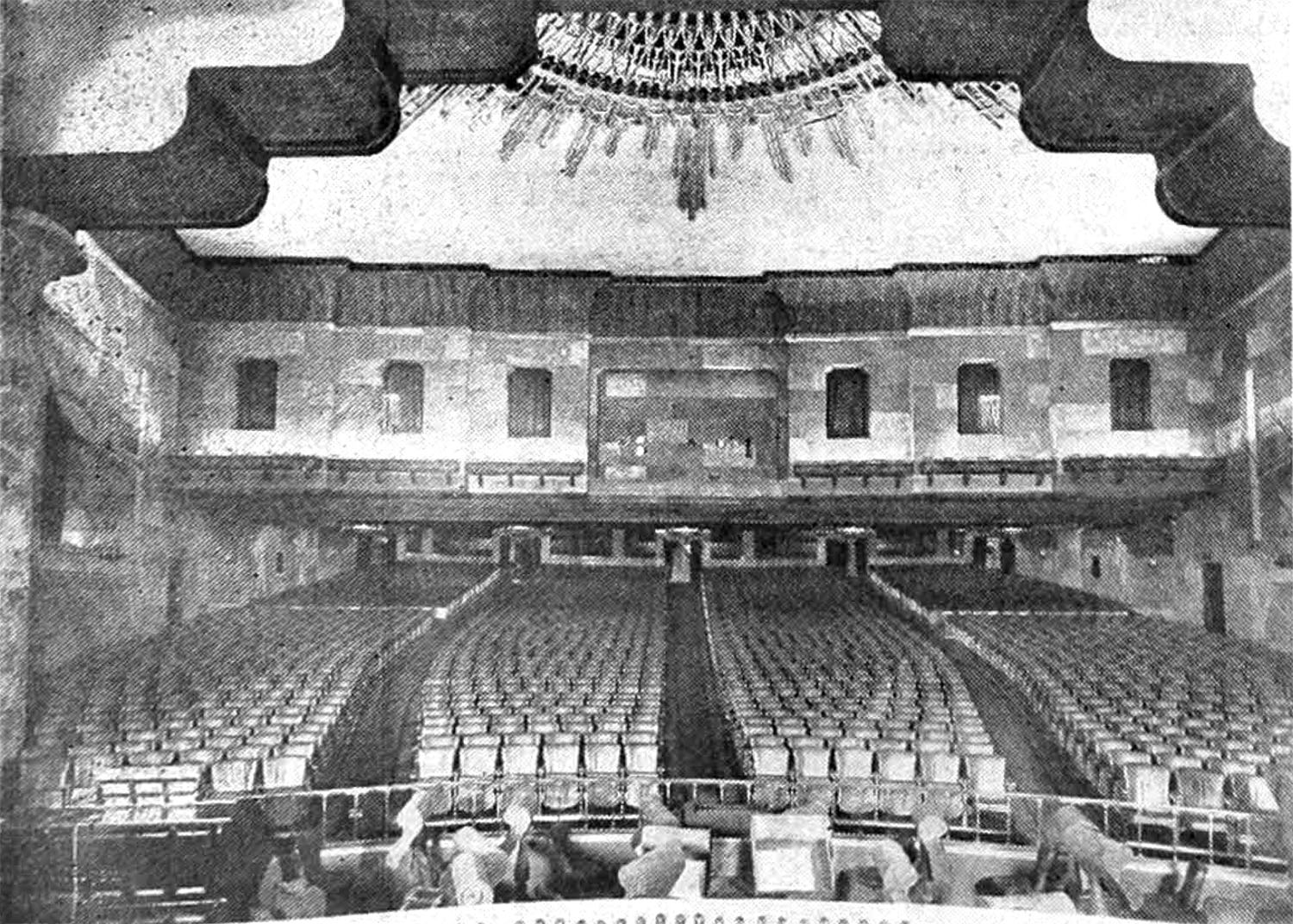 The theatre was originally planned to have a Mediterranean theme, but this was changed prior to construction. The red roof tiles above the main entrance are seemingly a holdover from the original Spanish design. We’ll never know if the story that the roof tiles had already been dispatched by the time the change in design direction had occurred is true or not, but it makes for a plausible story.

When opened in late 1922 the auditorium seated 1,771 all on one level. There were six large “windows” in the rear auditorium wall, two of which were private boxes for Sid Grauman’s guests.

On either side of the auditorium there were Singer’s Boxes, used for the elaborate prologues Grauman was famous for staging prior to movie screenings. Whereas the House Right Singer’s Box was directly accessible from the Dressing Rooms, the House Left Singer’s Box required a trip out the Stage Door and along a cement sidewalk before ascending a short ladder to the box, probably negotiating at least two doors to shield noise and light. 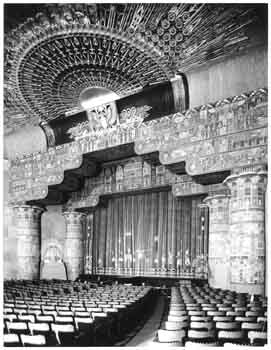 The Proscenium was flanked with two pairs of gargantuan plaster pillars of 6ft diameter, with Sphinx sculptures between them at floor level, and capped overhead with elaborate decorative stepped plaster beams. The whole affair framed the proscenium and visually stepped-in towards it from the wider and higher auditorium.

At the center of the outermost plasterwork beam was a winged scarab Khepri surmounted by the traditional medallion supported by snakes. Lights behind the scarab would have filtered through the open holes around the plasterwork design.

The centerpiece of the auditorium was a massive stylized sunburst device on the ceiling which was in fact an organ grille. Above the plasterwork beams framing the proscenium sat two organ chambers concealed from view, from where the organ would “speak” into the auditorium via the sunburst organ grille. Because of the 15ft height limit within the chambers the longer pipes were housed along the Stage Left wall, above the Load-In door, in an arrangement similar to the El Capitan Theatre just a few blocks west on Hollywood Boulevard. 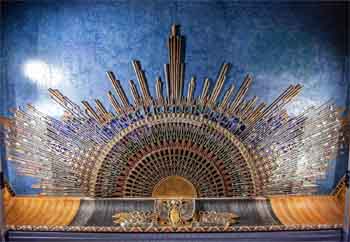 The auditorium included a large orchestra pit to house the musicians who accompanied the elaborate prologues, in addition to the organ console.

The Egyptian was one of a few theatres built in Southern California during the 1920s to feature an outdoor courtyard “lobby”. Taking advantage of the agreeable Los Angeles climate, the courtyard allowed patrons to congregate in a large open space, while being in full view of the busy street, thereby attracting passers-by to look in and wonder what was happening inside...and perhaps stop and buy a ticket. Never one to miss a trick, Sid Grauman also used the courtyard to advertise the theatre’s program with props and billboards, even including a life-size elephant to promote The Thief of Bagdad in 1924! 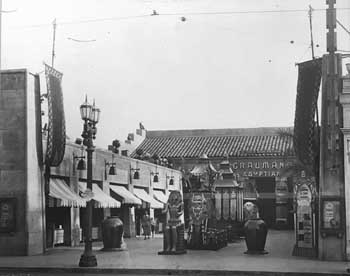 Other theatres of the time which were built with courtyard lobbies were the Fox Fullerton and Grauman’s Chinese Theatre (both also by the architectural firm of Meyer & Holler, completed in 1925 and 1927 respectively), the Pasadena Playhouse and the Alex Theatre in Glendale (both completed 1925), the Arlington Theatre in Santa Barbara (1931), the Plaza Theatre in Palm Springs (1936), and the Geffen Playhouse (completed 1929 as a masonic lodge).

To add to the Egyptian theme, a Bedouin guard, in full costume, paraded back and forth across the top of the tiled roof prior to showtime, in full view of the incoming audience and counting down the minutes so the patrons would not be late to their seats. The Spanish-style roof tiles above the entrance hint at the original design intent that the theatre have a Spanish theme.

Opening night at the Egyptian was the premiere of Robin Hood

starring Douglas Fairbanks. The prologue was reported to include a replica of the film’s Nottingham Castle set on the stage of the Egyptian. It was an elaborate affair, making full use of the outdoor courtyard for the stars to make their entrance with the press pack overlooking events from above. Thus the Hollywood movie premiere was born.

Backstage, the Egyptian was a hemp house with a Pin Rail at the Fly Floor on the Stage Right side. There is no evidence that the theatre was updated with a counterweight system at a later date.

As was the case with the State Theatre in downtown Los Angeles, operation of the Egyptian was turned-over to United Artists in 1949 as result of the consent decree ruling separating the studios from their theatre chains. After some minor redecoration the theatre reopened under United Artists’ control on 2nd December 1949.

In 1955 the Egyptian received updates to equip it for a long run of Oklahoma!

in TODD-AO projection, which saw some parts of the original proscenium removed. Seating was reduced to 1,318.

In 1968 further, and more extensive, updates were made to accommodate Dimension 150 (D-150) projection with an increased seating capacity of 1,340. The 70ft wide screen meant all of the original proscenium was removed. A new Projection Booth was also built at the rear of the main floor level.

The theatre closed in 1992, however was declared a Los Angeles Historic-Cultural Monument in 1993. The theatre suffered damage during the January 1994 Northridge Earthquake and was red-tagged (defined as a structure which has been severely damaged to the degree that the structure is too dangerous to inhabit). 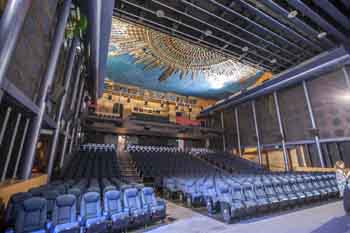 bought the building from the Community Redevelopment Agency. The exterior was restored to its original condition while the interior was “upgraded” to 20th Century standards. Interior hieroglyphics were recreated with plaster outlines showing their original positions.

American Cinematheque officially reopened the theatre on Friday 4th December 1998 with the “re-premiere” of Cecil B. DeMille’s 1923 silent film The Ten Commandments

, presented with the original live orchestral score. The evening’s gala event, devised by Cinematheque executive director Barbara Smith, came 75 years to the day after the movie originally premiered at the Egyptian Theatre.

The auditorium is now smaller (originally reported as seating 630; now reported as 616) however boasts a balcony, better seating, sightlines, and sound system. A second and much smaller screening theatre was also added at this time. The auditorium ceiling with its magnificent sunburst organ grille was preserved, as were the Singer’s Balconies. Some of the theatre’s original decorative items still remain on-site although hidden from general public view.

In July 2016 the projection booth was upgraded to allow the screening of 35mm nitrate prints. The walls of the booth were upgraded to provide better fire resistance and a new ventilation system, separate to the rest of the theatre, was added.

In Summer 2019 several media outlets reported that media giant Netflix was in talks with American Cinematheque to acquire the Egyptian Theatre. In late May 2020 the Los Angeles Times reported that

Netflix had closed the deal to purchase the theatre for an undisclosed sum from American Cinematheque. American Cinematheque will continue to program its screenings on Fridays, Saturdays, and Sundays, while Netflix will use it to hold premieres and filmmaker events for its growing movie business on weekdays. American Cinematheque said the purchase will provide the organization with a much-needed influx of cash to fund a renovation of the venue and put on more of its signature programming, including filmmaker Q&As and film festivals.

How do I visit the Egyptian Theatre?

** Tours are currently on hiatus while the theatre undergoes restoration and renovation. The theatre is expected to open some time in 2023 **

As of Summer 2019, American Cinematheque runs monthly tours, schedule permitting. Generally tours run at 10:30am on Saturdays, last around 60 minutes, and cost under $10. Most of the tour is on a level surface with very low gradient ramps. If you want to visit the old Dressing Rooms and Backstage areas be prepared to climb several flights of stairs. Find out more by looking at American Cinematheque’s Calendar