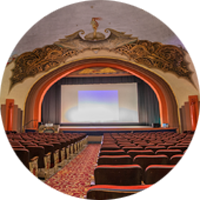 The Avalon Theatre is one of the two main components of the Catalina Casino Building, built by chewing gum magnate William Wrigley Jr. and opened in May 1929. The 1,200-seat theatre was designed for movies however has a full stage, orchestra pit, and dressing rooms allowing for stage productions. The theatre still retains its Page theatre pipe organ in almost original condition. 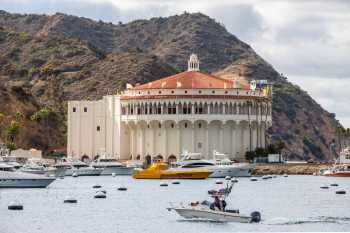 The Catalina Casino Building in 2021

Although originally advertised as the Casino Theatre, the Avalon Theatre name was established less than a year after the theatre’s initial opening in May 1929.

The theatre and surrounding building were designed by architect Sumner M. Spaulding and Walter I. Webber. Interior design, including the theatre’s fabulous Art Deco murals, was by John Beckman.

Beckman had previously worked on the elaborate lobby artwork of the Fox Theatre in Fullerton and many aspects of the interior decoration of Grauman’s Chinese Theatre in Hollywood. In later years Beckman would become a set director in the movie industry, working on films like The Maltese Falcon (1941) 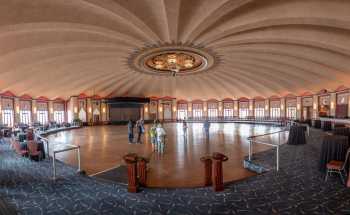 Wrigley’s budget for the building was originally $500,000 however it swelled to $2 million during construction, in large part due to a concentrated period of working around the clock to have the building ready to open for the Summer season of 1929.

The building has never housed any gambling; rather the casino name derives from the Italian term meaning “gathering place”.

The movie theatre occupies the first four floors of the Casino building and was designed in an atmospheric style. Rather than featuring realistic landscape sidewall murals, the auditorium got stylized Art Deco murals depicting the history of Catalina Island, California, and the progress of Man. The normal atmospheric “blue sky” ceiling was exchanged for a silver-top dome but still featured twinkling stars. The entire auditorium was, and continues to be, lit entirely by reflected light bounced off the ceiling. 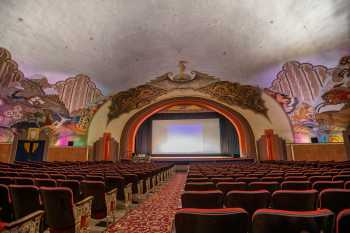 The auditorium murals have been described as “an Art Deco confection” and combine Greek mythology with early California life and the history of Catalina Island itself. The murals feature leaping deer, charging steeds, and sailing ships. On the left sidewall mural towards the rear of the auditorium there is a group of five monks: four of the monks’ faces were painted as self portraits by the artists who painted the auditorium murals. The fifth monk, whose face is hidden, represents John Beckman who designed the murals.

It is said that the theatre was the first in the country to be fully fitted for both silent and sound motion pictures, however this claim is made by several movie theatres even in just California.

Beneath almost every seat in the theatre was a hat shelf, the perfect place to hide 1930s head gear. Many of the hat shelves remain beneath the seats, a hidden testament to long-ago fashion. 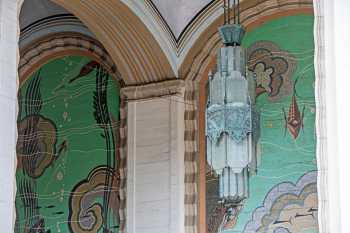 The exterior ticket lobby features nine massive stylized Art Deco oceanscape murals designed by John Beckman. The murals were originally intended to be executed in Catalina Island tile however due to time and budget constraints were painted onto the concrete exterior in 1929. The Catalina Island Company has since commissioned a tile version of the central mermaid mural which is installed above the central box office.

The theatre boasts a 4-manual, 16-rank organ built by the Page Organ Company which is played for special events. While the vast majority of the organ is original it has not been maintained and it’s estimated by independent theatre organ experts that only 25% of it is currently functional. 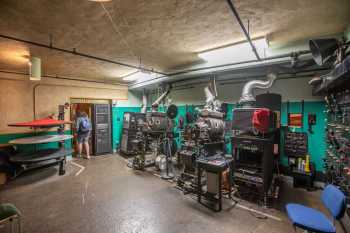 The theatre’s Projection Booth retains many of its original features, including two Brenkert carbon arc projectors and a working Brenograph

The theatre’s Projection Booth retains its original stage and movie presentation equipment in the form of a Brenkert carbon arc followspot, a Brenograph, and twin Brenkert 35mm projectors. Additionally a 35mm Century projector with Xetron console and platter system is still in place along with the theatre’s modern Christie digital cinema projector. The original dual lighting controls remain in place in the booth.

The Ballroom: above the theatre is a 29,000sqft (2,964sqm) ballroom, whose floor is cantilevered off the outside walls of the building and overhangs the theatre auditorium with a clearance of about 5ft (1.5m) in the center. 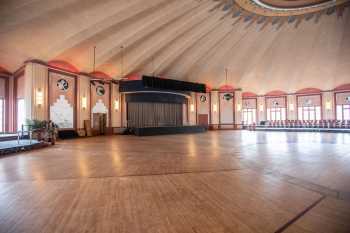 The Casino Ballroom, above the movie theatre

At the time of opening in 1929 the space was the largest circular ballroom in the world. The ballroom dance floor was carefully constructed of maple, white oak and rosewood that rest on a layer of felt and acoustical paper. The felt and paper are installed over a subfloor of pine that floats above support beams on strips of cork. Such careful attention was given to the dance floor to ensure a smooth and comfortable dancing experience for the building’s many visitors.

It is claimed that events can be held concurrently in the ballroom and theatre with no sound leakage between venues.

At the end of 2019, the Catalina Island Company ceased regular first-run movie operations at the theatre citing increased running costs and declining attendance. Tours of the building recommenced in May 2021.

In Spring 2022 it was announced

that movies would be returning to the Avalon Theatre in a deal between the Catalina Island Company and actor, producer, and long-time Catalina patron Wesley Alfvin. The theatre will be operated as a performing arts center, featuring current and classic films as well a live entertainment.

How do I visit the Avalon Theatre?

Photos of the Avalon Theatre