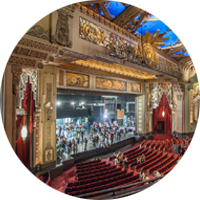 The Pantages is the most opulent Art Deco theatre in Los Angeles; no expense was spared on its sumptuous interior. The theatre is owned and operated by the Nederlander Organization

and was extensively refurbished in the year 2000. The Pantages brings Broadway hits to Los Angeles and Southern California audiences. 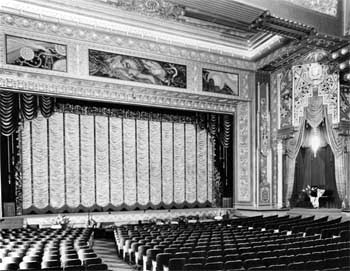 The Pantages Theatre was designed by architect B. Marcus Priteca and was the last theatre to be built by theatre magnate Alexander Pantages, at a cost of about $3 million.

The original plan called for 10 floors of office space above the two floors housing the theatre, however the upper floors were scrapped during the theatre’s construction as a result of the 1929 Stock Market crash.

Whereas it was originally designed with a mix of vaudeville and movies in mind, the Great Depression saw the theatre economize and exhibit mostly movies, operated in partnership by Pantages and Fox West Coast Theatres.

In August 1932 it was reported with the headline Fox Buys Pantages House that a half-million dollar deal had been struck to give West Coast Theatres sole and complete control of the theatre. After a short closure the theatre reopened on 20th October 1932 with the MGM movie Red Dust

, under the personal direction of Sid Grauman.

Seemingly the arrangement did not last long, as a “pooling arrangement” was agreed with the RKO Hillstreet Theatre. The arrangement was reported in 1949 to have been in place for 16 or 17 years. 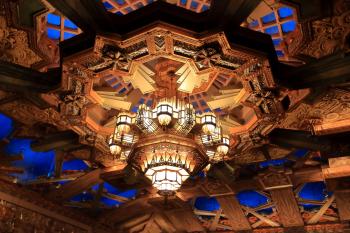 In mid-1949 it was announced that the theatre would be purchased by the RKO Theatre Circuit. Howard Hughes, who had taken over RKO in 1948, maintained his personal offices and an apartment for a time in the offices above the theatre entrance.

In 1965 the theatre came to be operated by Pacific Theatres. In December 1967 it was announced that Pacific Theatres had purchased the theatre and office building from the RKO division of Glen Alden Corporation, who had acquired RKO assets around 1950.

The Pantages hosted the Academy Awards (the Oscars)

In January 1977 it was announced that the Nederlander Organization

had entered into a partnership with Pacific Theatres to convert the theatre into a legitimate house “for all of the performing arts”. As of the 2020s the theatre is owned and operated by the Nederlander Organization.

Heading towards the dawn of the 21st century, the theatre was looking a little tired. Therefore, a major component of the deal for Disney to bring The Lion King

to the theatre was a comprehensive $10.8 million seven month refurbishment of the theatre, which was undertaken from March to September 2000. Over 20 years after the refurbishment was completed the theatre still looks as good, if not better, than it did when it opened in 1930. 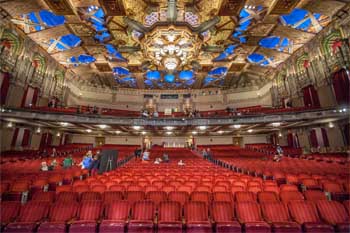 necessitated major works backstage by creating a 40ft by 40ft (12.2m square) pit under the stage to house set pieces and hydraulics. Understage dressing rooms were relocated and the theatre now boasts an extremely flexible understage area which can accommodate any manner of openings in the stage floor. The popular show went on to run for over 28 months at the Pantages.

The seating capacity was reported in initial press releases as 3,500, designed to be 3,212, and ultimately the theatre opened with a capacity of 2,812 by virtue of wider seats and increased legroom than originally planned. The current seating capacity is 2,703.

The centerpiece of the auditorium ceiling is an elegant starburst chandelier suspended below a blue backlit upper ceiling, creating a mesmerizing 3D effect. Historic photographs show that cloud projectors were originally installed in the ceiling.

There are small side stages flanking either side of the proscenium arch, and between those and the auditorium side walls are organ chambers. No traditional organ has ever been installed in the theatre, and plans announced by Pacific Theatres in 1979 to relocate the 4-manual, 37-rank Kimball (opus 6644) from the Wiltern Theatre never came to fruition. An Allen electric organ was installed in the theatre by the Nederlander Organization’s nonprofit arm in 1992 but its current status is unknown. 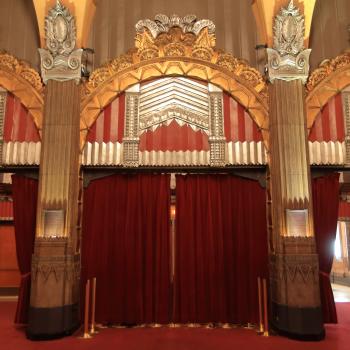 The Grand Lobby is dedicated to Los Angeles and California of the 1930s. Elaborate plaster relief panels depict the leading industries of the time such as agriculture, oil, gold, lumber, movies and the arts, sports, and real estate. There are also some hidden nods to local colleges USC and UCLA. Grand byzantine figures watch over all those passing through the Grand Lobby from the side walls. The staircases to the balcony level are adorned by life-size figures depicting the aviation and movie industries.

In December 2016 the Pantages hosted the world premiere of Rogue One: A Star Wars Story

in the United States outside of New York’s Broadway, however the Covid-19 pandemic shut down theatres one day before the production was due to open. After a 17-month delay, Hamilton

finally opened to a full house on 18th August 2021. The production’s final performance was 20th March 2022, resulting in a triumphant seven month run at the Pantages Theatre.

How do I visit the Pantages Theatre?

Public access tours are not generally available due to the busy nature of this theatre, however, over on occasion Pantages Theatre subscribers have sometimes been invited to private Open House events. If you love Los Angeles theatre and the Pantages, your best bet to see more is to subscribe to their season - check out the Hollywood Pantages Theatre website

for more details. Information correct as of April 2022.

Photos of the Pantages Theatre